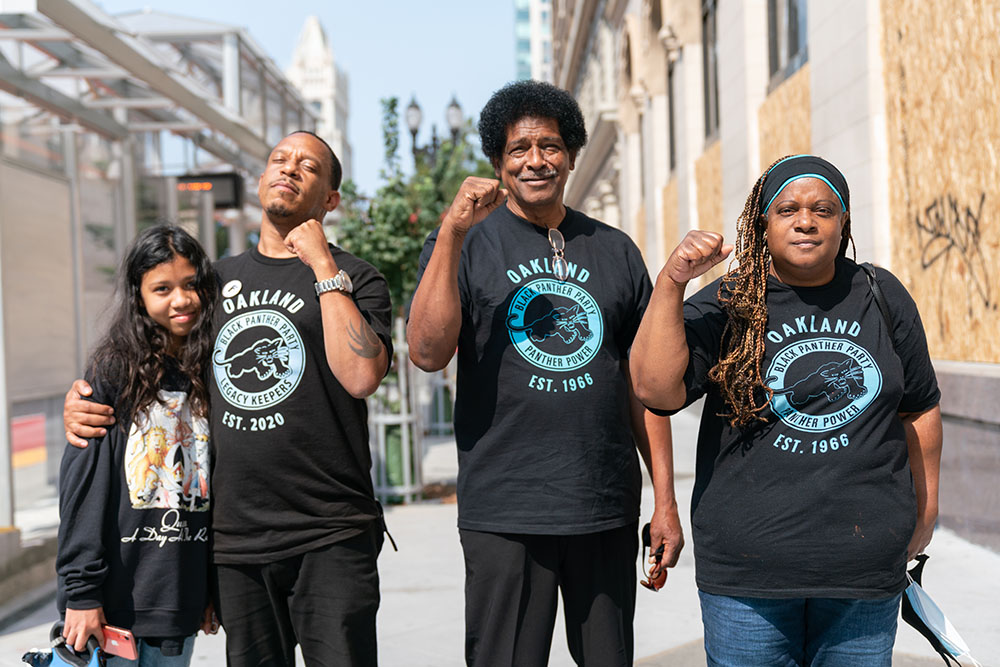 The original Black Panther Party (1966-1982) left behind a legacy that is often side-lined by the imagery of Black men and women carrying guns in self-defense while wearing black berets and leather jackets. The legacy had been stifled as many party members became political prisoners, and without knowing it at the time, targets of an FBI program called COINTELPRO meant to destroy the party using various deceptive tactics.

With programs like free breakfast and lunch for school children, free health clinics and educational institutions, the BPP created over 60 documented community programs they called survival programs. Many of these programs have become a blueprint for activists today. The BPP created these programs acknowledging that the government was not going to come to communities and do the work of improving them, so the communities had to organize and build structural programs for themselves.

Founded in Oakland, with branches eventually spreading all over the U.S., the BPP believed the only way to create economic stability and self-sufficiency in Black communities was through a combined effort of the people who are from and part of their communities. That is where the term they often use, “All Power to the People,” comes from.

After the death of George Floyd sparked historical nationwide protests under the banner of Black Lives Matter, activists eagerly called original BPP member Saturu Ned looking for advice on how to maneuver what they saw as a modern-day revolution. Formerly known as James Mott, Ned became a BPP member in 1968 and was a member of the BPP’s Lumpen Band. He also taught at Oakland Community School, an award-winning school created by the BPP.

Amin Cooley was one of those activists who called Ned feeling frustrated and angry after watching the video of George Floyd’s death by police officers in Minneapolis, Minnesota. Cooley is from Oakland and was raised in a time when crack cocaine dominated the streets. He saw how it affected his community. He looked up to the BPP legacy but admits he did not know too much about its history.

When he was young, he went to see ‘Panther’ a film directed and written by Mario Van Peebles. “And this was like, a secret premiere, and I was like ‘wow, this is the first time I actually get to meet some Black Panthers,’” Cooley said. When he attended the premier he was not able to build up the nerve to talk to the original members who were present, but he remembered the movie making a big impression on him.

“It was about the community and I wanted to be a part of that. And I’ve always looked up to them my whole life. And when George Lloyd was murdered by the police, I cried, I cried really hard,” Cooley said. After sleeping all day he said he woke up the next day, “with a fire in my heart and my soul.”

Cooley reached out to a friend who knew Ned. Cooley said he told his friend, “We got to see the Black Panther Party back or at least the programs and the ideology because they have the blueprint in their head.”

Cooley connected with Ned, and they both became co-founders of B.P.P. Legacy Keepers. Under one non-profit with contributions being tax-deductible through the Pledge Group Foundation 501(c)3, B.P.P., Legacy Keepers is seeking to build a network of “legacy keepers” who are already doing community work as well as educate anyone who wants to bridge the gap of knowledge from the time of the BPP to the present.

Calling for national access-for-all healthcare, advocating for affordable housing, working towards changing the justice system, all of these current-day political discussions fall in line with the BPP 10-point program.

The problem, Ned explained, is that today there is no clear leadership or messaging. He calls the current cycle of video recordings of Black people being killed by police followed up with marches and a hashtag to donate money a “death march” that has no clear vision or accountability. Marching has the purpose of raising attention to a problem, he said, but there is work to be done beyond that.

Legacy Keepers instructs their network users in the methodology of identifying what’s going on in communities and figuring out how to resolve community issues and problems. The problems are intertwined, so working on the idea of police reform or defunding the police would have to collate with other issues in communities, like healthcare, mental health, job security, housing, and food security.

Instruction is based on the BPP legacy using modern technology like classes over Zoom and studying how video phones and social media can be used for effective strategies.

With Ned’s wife, Dr. Zafirah Ned, other instructors available to teach these classes include Katherine Campbell, (Auntie) Francis Moore, and Professor Steve McCutchen. The B.P.P. Legacy Keepers network includes hundreds of individuals, organizations and businesses all over the country.

Cooley represents the younger generation who is learning under the guidance of Ned and will be an instructor as well. Saturu Ned has already done classes on Zoom to universities like Fresno State.

“We are giving classes to policymakers on a national basis, giving Zoom presentations to individuals who want to see how they can actually increase the effectiveness of their organizations,” Ned said. “with other organizations…switching from the concept of just Black Lives Matter, first the historical classes, and then the ideology. We’ll separate myths from fact.” The purpose Ned said, is to start conversations into specific plans and to turn plans into action.

“You’re talking about defunding the police. Every time we hear that, do we not ask where’s your plan?” Ned said. So far, he said he has not heard a concept with a detailed plan that could feasibly be turned into action, and that is a problem that organizing and educating current day legacy keepers can solve.

For more information go to bpplegacykeepers.com.