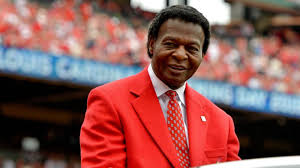 Louis Clark Brock, an outfielder whose 19-year career in professional baseball started in 1961 with the Chicago Cubs, has died.

Brock had been receiving treatment for multiple myeloma, a type of cancer, since 2017 and in 2015 his left leg was amputated due to a complication from diabetes.

Brock grew up in Louisiana, the son of sharecroppers who picked cotton.  As a child, for sport he would hit rocks with tree branches.  He was in 11th grade before he played organized baseball.

He received an academic scholarship to Southern University in Baton Rouge, La.  And when he feared he couldn’t maintain his grade average for the scholarship, he started playing baseball and received a sports scholarship.

In 1960, Brock was signed by the Chicago Cubs and made his professional debut in 1961.  He was traded to the St. Louis Cardinals in 1964 and played with them until his retirement in 1979.

While with the Cardinals he won three pennants and two World Series.

He played with Bob Gibson and Curt Flood.

In 1974, Brock broke Maury Wills’ single season stolen base record and Ty Cobbs’ career steals record.  Both records were subsequently broken by Rickey Henderson while playing with the Oakland Athletics.

Brock was the first major leaguer to have an award named after him while still being an active player, the National Leagues Lou Brock Award.

In his 1976 memoir “Lou Brock:  Stealing Is My Game,” he wrote:  “I have only one thing in mind – to steal off him [the pitcher].  The very business of disconcerting him is marvelously complex.”

He was selected to the Baseball Hall of Fame on the first vote in 1985.

After retiring from baseball, he coached and was an analyst for television.  He was also a florist and became an ordained minister along with his third wife, Jacqueline.

He is survived by his wife and three children.