Tenants of one of Oakland’s Biggest Evictors are Organizing
Advertisement 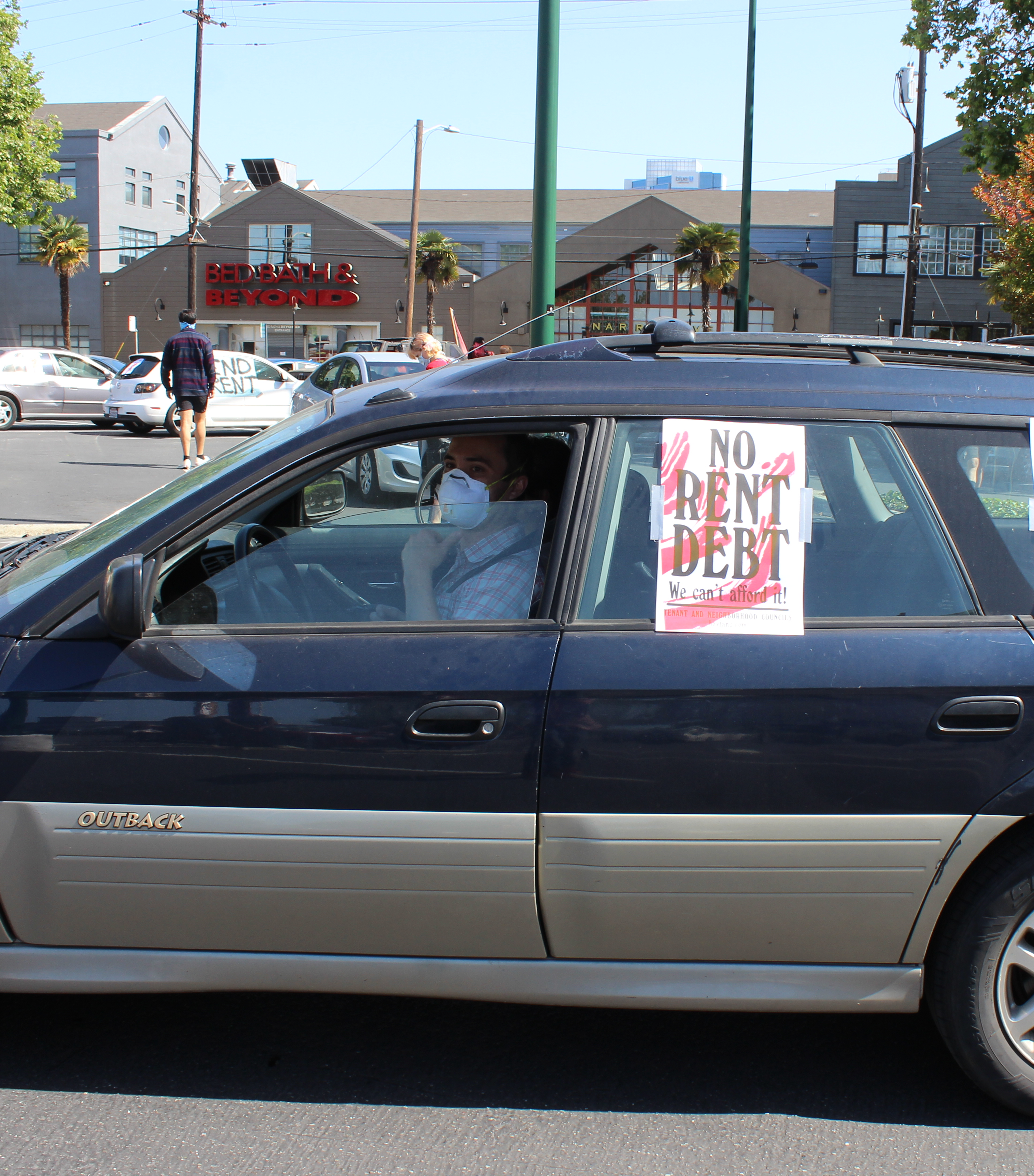 A protestor on May Day with a sign attached to his car that reads "No Rent Debt." The SMC Tenant Council sent a letter to SMC East Bay on May Day demanding all rent debt be cancelled during the pandemic.

Tenants who rent from Sullivan Management Company (SMC) East Bay, have founded the SMC Tenants Council, unifying to make collective demands including that the company cancel debt of back rent that’s owed during the COVID-19 pandemic.

“We’re putting together all of us so if they touch one of us they have to touch all of us,” said Xavier T. de Janon, an SMC tenant, council member, and the group’s media spokesperson.

Although de Janon would not reveal precisely how many members the SMC tenant council currently has due to concern for retaliation, he said they spent over 100$ on mailers which they used to contact hundreds of SMC tenants, many who joined the council.

“There’s enough of us that we feel confident that there’s a critical mass. If we were to act together, it would affect SMC’s bottom line,” said de Janon.

In 2014, The East Bay Express reported that SMC East Bay’s owner, Neill Sullivan, started buying hundreds of properties, mostly in West Oakland, in the wake of the 2008 recession. The recession and housing market collapse allowed Sullivan to purchase the properties at about half of what the previous owners had paid. Billionaires and/or hedge fund investors provided needed capital for Sullivan’s investments, including former presidential candidate Thomas Steyer.

The Anti-Eviction Mapping Project reports Sullivan has purchased at least 356 properties and served at least 357 eviction notices from 2011 to 2016, making him the 12th biggest evictor in Oakland at that time. But it’s difficult to know exactly how many properties Sullivan has or how many eviction notices he’s served since he is associated with at least a dozen companies and LLCs.

The Oakland Post emailed SMC East Bay and asked how many properties Sullivan owns and if we could speak with him, but SMC East Bay responded with an unsigned response that did not answer those questions.

“They have too many properties to have proper oversight and a lot of their tenants are suffering,” said an SMC tenant and council member who asked not to be named for fear of retaliation.

The tenant says while her rent is affordable, her building is neglected and looks dilapidated to the extent that “people think it’s abandoned.” Inside, her place has a ceiling leak that previous tenants made a formal complaint about over three years ago and still hasn’t been fixed. The place is filled with rats and mold which affects her health as the mold harms her lungs and the rats bring fleas that bite her. Termites have eaten much of the wood in the home and the tenant is concerned about what would happen if an earthquake struck.

Over half of active SMC Tenant Council members say they were unable to afford to pay rent due to the COVID-19 crisis. De Janon says expenses related to his family increased drastically while his income level remained the same. On May 1, SMC Tenant Council collectively sent an email and a physical letter with demands that would allow him and other SMC tenants to be able to afford to stay in their homes: canceling rent owed during the pandemic, a rent reduction for the rest of this year, and allowing lease transfers to be available to subtenants.

Neither SMC East Bay nor Sullivan responded directly to the email or the letter but instead, the company individually emailed tenants the same response. The email outlines services, some already running, some planned, that SMC East Bay says it provides to Oaklanders including a martial arts program, a community garden after school arts programs, and a gift card program for residents who are having difficulties affording groceries.

While the last two paragraphs of the nine paragraph email directly address housing affordability and the COVID-19 crisis and confirm that SMC East Bay intends to obey a City of Oakland emergency ordinance which currently prevents eviction, it makes no mention of the SMC Tenant Council, rent forgiveness, or any of the council’s demands.

“We will work with you to discuss your financial difficulties…however, if you do not pay rent and don’t notify us that you have been affected by the coronavirus pandemic, we will assume you have not been directly impacted and your current lease is in full effect,” reads the email.

The email also states “for those affected by the pandemic, there are a variety of governmental and third-party resources,” insists “these organizations are not affiliated with SMC East Bay,” then lists charitable organizations that could help people pay rent.

“I think the way [SMC East Bay] responded to us shows the idea that they can be great to the community in theory, but our individual lives don’t really matter,” said de Janon.

De Janon also says SMC East Bay has asked to see his personal financial information, but after talking with lawyers, he concluded he wasn’t legally obligated to.

SMC East Bay did respond to one of The Oakland Post’s emailed questions which asked if they recognized SMC Tenant Council. SMC East Bay emailed back and stated: “While tenants are free to organize in any manner that they deem appropriate, we will continue our historic practice of responding to individual tenant requests on a case-by-case basis—which we believe is fair, smart and consistent with best industry practice.”

SMC Tenants Council is currently exploring the legal protections that forming a tenant council could provide them and seeking out new SMC tenants to join them. Those interested can check out their Facebook, Twitter, and Instagram pages, email them directly at smctenantscouncil@gmail.com, or call 510-342-9843.