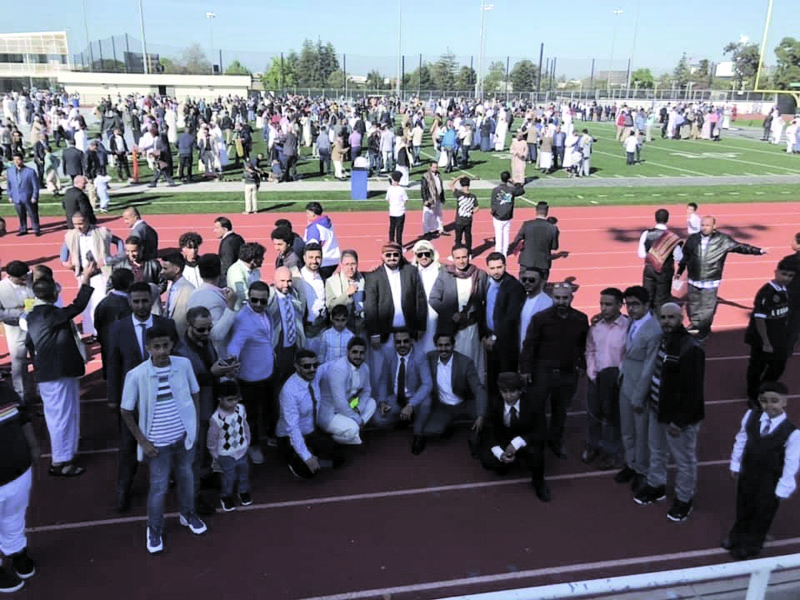 The world’s 1.8 billion Muslims face the first Ramadan in recent memory under lockdown, curfews and other restrictions because of the COVID-19 pandemic.

The holy month that begins April 24 and goes to May 23 is marked by daily fasting between dawn and dusk, followed normally by communal prayer at their local houses of worship just before sunset.

The prayer to break the fast, Maghreb, is at sunset and is followed by a communal meal, Iftar, provided by the mosque but also includes food that people have prepared and brought from home, like a potluck.

Each night of Ramadan, in a special prayer service called Tarawih, a portion of the Holy Quran is recited by a specialist, the Hafiz e-Quran, and by the end of the month, all 30 sections, or juz, of the Quran will have been heard.

“Muslims like to gather and pray together and be close to God” during Ramadan said Dhaifallah Mo., public relations officer for the Bay Area branch of the Yemeni American Association. “But the information we have so far is stay at home. We must do what is best for our community.”

Instead of the convivial gathering she’s accustomed to, Islamic activist Moina Shaiq  will be at home in Fremont with her husband, Mohammad.  Shaiq thinks that the restrictions of this year’s Ramadan may actually enhance the experience. “As Muslims, we follow the teachings and doings of Mohammad. In his time, he would pray at the mosque two nights and pray at home for one (during Ramadan).

“We have huge spreads of food now, but that wasn’t how it was done in his time. We get to go back to the origins, the roots of faith in its spirit and celebrate as such.”

She seemed most concerned about not being able to hear the recitation of the Holy Quran, as neither she nor her husband have memorized it.

“There’s nobody in my house who can do that,” she said. But they have been advised that in their homes someone can read a portion from the Quran as a substitute.

In many countries, mosques have been closed for weeks. Iran, grappling with at least 67,000 COVID-19 sufferers and 4,000 deaths, may bar all Ramadan gatherings.  In Egypt, all Ramadan activities including group iftars and Zakah tables are banned.

Zakah are offerings for the needy – sometimes it’s a meal, or other donation but they are usually given personally. The threat of the virus presents a challenge to the customary ways the faithful ordinarily fulfill one of the pillars of Islam, which is charity amnd is required during Ramadan.

Dhaifallah Mo says members of the Yemeni American Association have already been distributing water and hand sanitizer to the needy and unhoused in the Bay Area and will step up their work during the holy period. And Saba Poultry, with stores in Oakland and San Francisco, are members of the association, began donating free chicken and/or eggs to local health workers, police and other first responders and will continue to do so until April 30, or when the order is lifted.

Also, common communal celebration is the last day of Ramadan, called Eid. During the month leading up to that day, markets sell regional wares that support the holiday: clothing, specialty foods, and in Egypt, lamps.

The restrictions have an impact on local economies, especially those at the lowest end.

“People are suffering because so many businesses are closed right now,” said Shaiq.

But unlike some church communities in California and other areas of the U.S. that have chafed at the shelter-in place orders on grounds of religious and personal freedom, sources for this story have uniformly invoked the advice of Islam’s Prophet Mohammad.

“Obey Allah, obey the Messenger (Mohammad) and obey those with authority amongst you,” quoted Imam Faheem Shuaibe of Masjidul Waritheen in Oakland. “There’s nothing I see that is against our religion. There’s nothing to protest, for a Muslim.

“This is a really a reclusive, meditative, prayerful time,” Shaibe continued. “This should not be an unsettling time for Muslims.”

Shaiq invoked the time of the Prophet when there had been a plague. “Caliphs at the time of Mohammad told people to stay at home – ‘let no one into cities and let no one out.’ People know that  this (sheltering in place) is in line with our faith.”