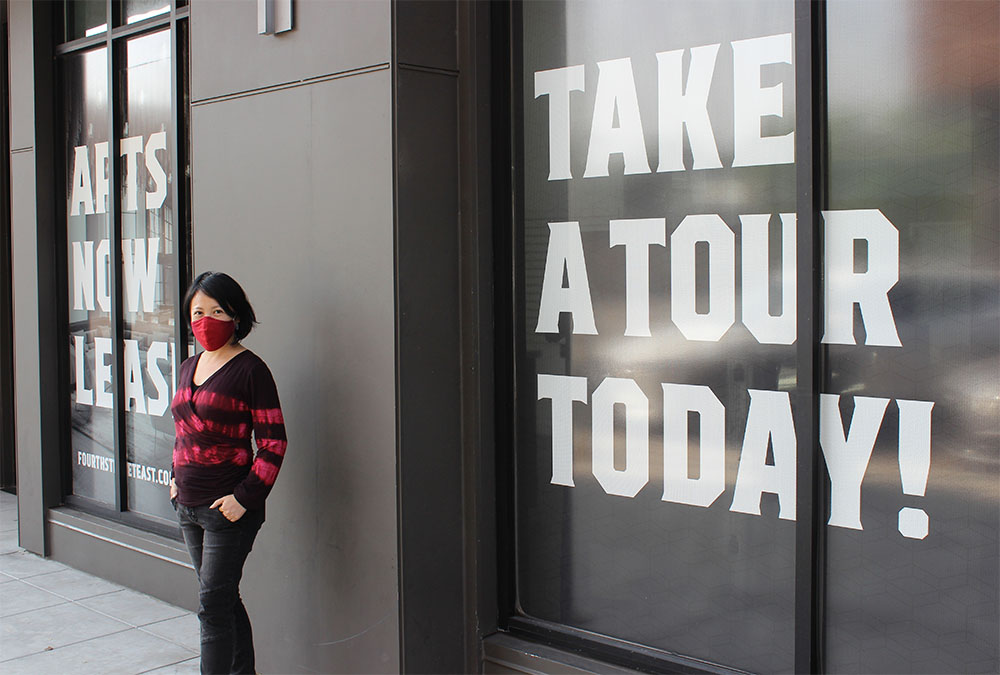 After being denied amenities and suffering from financial loss due to the COVID-19 pandemic, more than 60 tenants who live in Fourth Street East, a luxury apartment tower in Jack London Square, have banded together to collectively seek demands and withhold some of their rent from Carmel Partners, the multi-billion dollar corporation that owns the condos and collects their rent.

“They’re a huge corporation that could afford to cut tenants a break,” said Henry Clifton*, a 4th Street East tenant. “A powerful corporation like this is in a position where they can at least not take advantage of their tenants, kick them while they’re down, and keep charging them for amenities that they’re not getting.”

Clifton moved to Oakland two years ago after landing a job as a designer. The Fourth Street East residence sparked his interest because it offered amenities including a pool, jacuzzi, co-working lounge, a gym, roof-top BBQ area, and a game room. Months after he moved in, the promised amenities still were not available. Then, when COVID-19 hit, they were suddenly shut down.

“They’re probably saving money on heating the pool, heating the jacuzzi, running all the exercise equipment,” said Clifton. “But instead of us getting that reflected in our rent, they’re just collecting the full rent.”

Clifton’s expenses have gone up because he’s now working from home, which causes his utilities to rise. After a partner moved out, he’s paying the full $4,050 per month for his one-bedroom apartment. As rents have lowered in the area, he wants to break his lease. But doing so is expensive, due, in part, to having to return discounts offered at move-in, he calculates that it would cost him about $20,000 to break it.

Joy Khoo, who has lived in Oakland for five years and is self-employed, suddenly lost about 70% of her income when she lost a client due to COVID-19. Like Clifton, the amenities at Fourth Street East attracted her and she asked for a rent reduction when they were no longer available. She, too, wants to break her lease, but can not afford it.
“Everywhere else in the market the rents are going down,” said Khoo. “I just want a little break.”

After she inquired, Greystar, the company that works for Carmel Partners to manage Fourth Street East, allowed her to transfer her lease to another person if she could find someone. But as prices in Fourth Street East condos have fallen due to COVID-19, it has been impossible for her to find a person to take over the $2,800 per month rent for her studio. Their website currently shows at least 60 vacant units, over 18% of the total units at the location.

Starting Sept. 1, Clifton and Khoo are withholding 25% of their rent. Other tenants are withholding up to 50%. They, along with 64 other tenants in the building, are part of the Forth Street East Tenants Association (FSETA). To get the word out, FSETA put flyers around the building in mid-August, but they said an employee of Greystar took many of them down.

FSETA has worked with Bay Area Tenants and Neighborhood Councils (TANC) to help them get advice about dealing with Carmel Partners and Greystar. TANC has also helped other local tenants who have the same landlord organize and make collective demands.

One of them is SMC Tenants Council, whose landlord, Neill Sullivan, has purchased over 350 properties. SMC Tenants Council complains that Sullivan neglects units with lower rents. They currently have many tenants on total rent strike who are demanding rent cancellation for those who are suffering financial loss due to the pandemic.

“Working with TANC has been really supportive,” Khoo said.

In addition to losing amenities, tenants have complained of other problems, many of them relating to Greystar not communicating when they complain of issues. Aliyah Harris*, who has lived in Fourth Street East since its inception in late 2018, has a lease that is ending soon and is glad to be moving on.

“This is not a place I would want to continue to live in,” she said. “It’s been really horrible. The lack of communication has been the biggest concern.”

Harris has complained that the elevator has been inoperable for extended periods of time as well as her garbage disposal but never received a response from Greystar. There have been workout classes in a courtyard by her unit at noon on weekdays with an instructor who loudly amplifies his voice. She said it disturbs her and others that work from home and suggested to Greystar that they move the class to the rooftop, but has not received a response.

In the past, Clifton and Khoo say that Greystar would only respond in a timely manner if tenants give them a bad Yelp review. Clifton said they have also offered rewards for good Yelp reviews.

The tenants have had more success by addressing Greystar collectively. They sent out an e-mail on Aug. 24 and received a response on Aug. 29. Since then, some amenities have slowly opened but in restricted ways that make it hard for tenants to access them. Rent has not been reduced.

“As the closure of these amenity spaces has been entirely out of our control,” wrote Greystar Senior Community Manager Kelsey Montano in the Aug. 29 e-mail, “we are not providing any discounts to rent.”

Three days later, on Sept.1, 66 tenants, about 20-25% of the Fourth Street East’s total current tenants, withheld at least 25% of their rent. They plan to continue to do so next month.

The Oakland Post e-mailed Carmel Partners and Greystar for comment on this news story. Greystar did not respond. Peter Jakel, the vice president of Strategy for LinnellTaylor Marketing, a public relations company, responded on behalf of Carmel Partners.

He emphasized that Carmel Partners share “residents’ frustrations with the incredible impact of COVID-19” and said that, where possible, they have opened amenities such as the “pool, roof-top deck, courtyard, conference rooms, pet spa, and DIY workshop.”

Jakel did not respond to the question: “Given COVID-19, why hasn’t rent been reduced for tenants?” He did not comment on rent reductions due to all amenities being closed for extended periods of time.

He addressed financial questions in the following statement “We have been especially mindful of residents who have suffered financial or health-related hardship due to COVID-19, and are being very flexible during these difficult times. We are not evicting any residents or charging any late fees, and we have provided flexible payment plan options and negotiated lease terminations to reduce balances owed.”

Since Carmel Partners own condo complexes in major cities all across the country, Clifton is doubtful that measures taken so far will have much of an economic affect on them. He is hoping the FSETA can spread the partial rent strike to Carmel Partner’s housing units in other locations.

“If we get 10% of all of Carmel Partner’s places to do it then maybe that will affect their bottom line,” he said.

*Henry Clifton is a pseudonym. We did not use his real name because he feared retaliation from Carmel Partners and/or Greystar. Aliyah Harris is also a pseudonym.