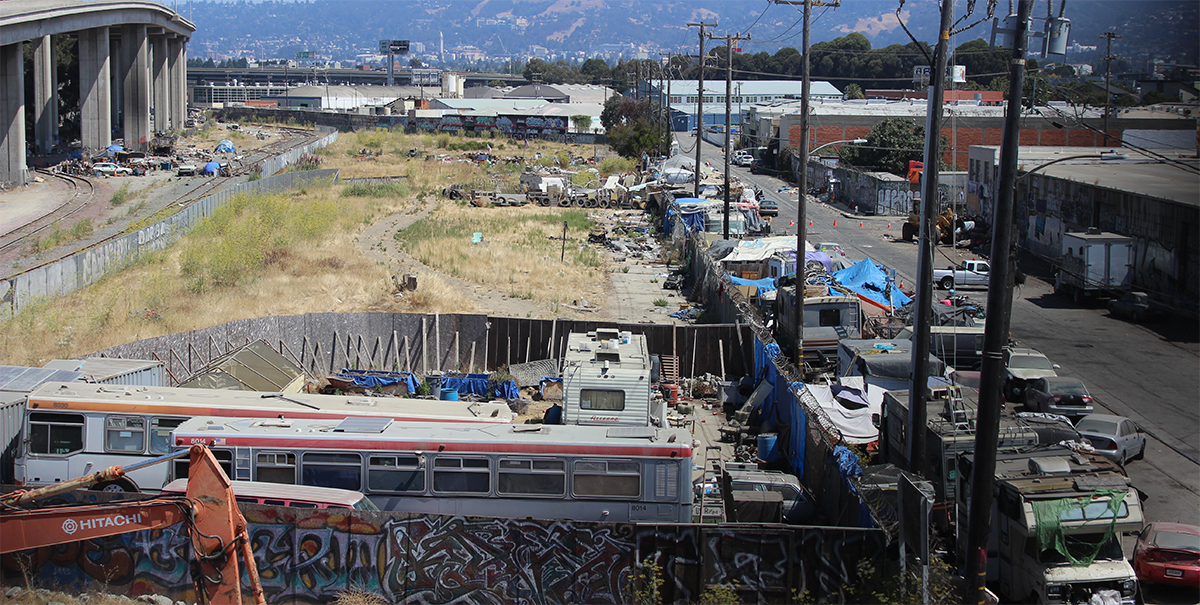 Game Changer's land and Wood Street on Aug 12, 2020. Cam Mckeel's bus sits front center. Mavin Carter-Griffin's home sits in the center behind the bus with tires stacked in front of it. RVs and self made homes sit to the right, along Wood Street. Photo by Zack Haber

In the summer of 2019 Mayor Libby Schaaf announced plans to construct a safe RV parking site for unhoused residents living along Wood Street in West Oakland but recently released e-mails call those plans, and the intentions of those plans, into question.

The proposed site, if constructed, would be available for some people living on and just west of Wood Street and between 24th and 26th streets in West Oakland. That area is densely populated with around 100 people living in vehicles, self-made homes, and tents.

The site would allow them to have electrical hookups, freshwater, regular trash and bathroom services but would only be available for those who live in RVs. It is unclear how long RV dwellers could live on the site.

City administration drafted lease terms in August and September 2019 to rent a 1.5-acre tract of land covered mostly in dirt and stone just west of Wood Street from Game Changer LLC, a San Francisco-based company owned by a billionaire named Fred Craves. At the time, Game Changer had left the land unused for years and many people already lived there. While no rent was to be charged, the 18-month draft of the lease stipulated that the city would agree to pay about $33,000 per year in property taxes for Game Changer.

Clarifying the city’s plan for Game Changer, the lease quoted the City of Oakland Geographical Emergency Shelter Intervention Policy which laid out two goals for the site: “provide respite and stabilization to the unsheltered community” and “alleviating the impact the encampments have on the surrounding community.”

“When a site is scheduled to open,” reads the policy “the city determines an area surrounding the site that is considered an invitation zone.”

According to the policy, people in the invitation zone are offered space in the site, but after the site fills up “the invitation zone becomes the closure zone and enforcement is used to remove or prevent the return of any encampment in that area.”

While the city administration has maintained that the proposed site intends to help the community of unhoused people living on Wood Street, the stated policy implies that those living in tents or self-made homes in the area would be displaced as they could not move into the safe RV parking site.

“Closure Zones are the highest priority to maintain as they surround the emergency shelter intervention and can have an impact on normal operations at the intervention site” the policy stated.

An email from the area’s Councilmember Lynette Gibson McElhaney to Assistant City Administrators Joe DeVries and Maraskeshia Smith also suggests that by late October of that year, the planned construction of the site was in doubt.

The e-mail, dated Oct. 29, 2019, shares notes taken from a meeting McElhaney attended with the city administration earlier that day. Under a heading marked “Wood Street,” her notes read “Administration no longer considering location for RV parking; cost to prep and clear are excessive.”

“I cannot provide any updates on the Wood Street effort as joint meetings we had sought to convene were discontinued when the administration let me know that they were not moving forward with the RV site,” McElhaney wrote in response to questions about her October notes and the current plans for Wood Street. “Sometime later I was told RVs were still planned but I have not been provided details.”

About a week after the meeting with McElhaney, on Nov. 5 and 6, 2019, the city of Oakland cleared vehicles and residents off of Game Changer LLC’s land. They faced resistance as the United Front Against Displacement (UFAD), a grassroots organization that sponsors protests and does mutual aid projects with Wood Street residents, organized a rally where about 35 protesters supported residents who stayed on Game Changer’s land and refused to move.

While many other residents moved onto Wood Street, where they are now more densely packed together and closer to traffic, five people refused to leave Game Changer’s land.

One resident was Natasha Noel, who worried that her damaged vehicle with no wheels would be broken if moved. Another resident, Mavin Carter-Griffin who has been on the land for over five years, lives in a self-constructed shelter and her displacement would mean destroying her home. A third resident, Cam McKeel, lives in a large bus and does not know where else he could park it if forced to move or if the bus would be allowed in a safe RV parking site.

Although the company has erected a fence around their land, hired a security guard, and served the residents’ eviction notices, four residents, including Carter-Griffin and McKeel remain on the land. Noel has moved in with her daughter.

An e-mail from Dec. 13, 2019, by Patricia Smith, a lawyer for Game Changer, to Assistant City Administrator Joe DeVries and Deputy City Attorney Joe Flanders stated that Game Changer intended to clear residents from the site by December 20 so the city could control the property. After the date passed, Game Changer still had not gotten residents to leave.

On Feb. 3, 2020, the San Francisco Chronicle published an article that called into question residents’ decisions to stay on Game Changer’s land and suggested the decision was preventing the construction of the safe RV parking site. The piece quoted Dayton Andrews, an organizer with the UFAD.

“No one’s actually been given a promise that they’ll get a spot in the Wood Street lot,” Andrews said in the article. “They’ve been given no written proof that they will get to be on this safe parking lot. Folks would like to use the service, but they’d actually want assurance that the service would come through.”

Later that day Maraskeshia Smith e-mailed DeVries to ask about the article and the Wood Street plan.

“I think we have done all we can until the courts and attorneys do their work,” DeVries responded in an e-mail, referring to the eviction notices that Game Changer had served to residents. “I do believe it is worth switching gears and focusing on opening the Post Office site.”

When The Post News Group e-mailed DeVries about the plan for Wood Street and the Post Office site, DeVries did not respond but forwarded the inquiry to Public Information Officer Autumn King.

King acknowledged that the city administration “did initially express concern about the cost of site prep and clearing” but also stated that “the city is still working closely with the property owner to move forward with the lease.”

“Once the owner informs the city that the site is available,” she wrote, “we can resume established plans and open a site.”

King did not respond to a direct question asking if a lease between Game Changer and the city had been signed.

King described the Post Office Site as an RV safe parking site planned for a tract of land behind the West Oakland Post Office that the city has been trying to construct since January 2020 but has been blocked by a hold the Federal Highway Administration has put on homeless interventions on highway-owned land.

At the time of writing, Game Changer’s land sits vacant except for four residents. The large community of people living in tents, RVs and self-made homes mostly live densely packed together on Wood Street, although some live under the 880 Highway on land owned by CalTrans.

Residents report that the city is not providing hand-washing stations, freshwater or dumpsters to the community. They have been provided with two portable toilets. A visit to the site on August 11 showed one toilet had been serviced that day, but the other was last serviced on July 20.

The UFAD and The Berkeley Free Clinic have provided some hand-washing and freshwater stations to the community, but the needs of the population far outnumber the ability of the two small organizations to meet them.

Residents are still unclear when or if a safe RV parking site will be available and, if it is constructed, who will be allowed to use it.