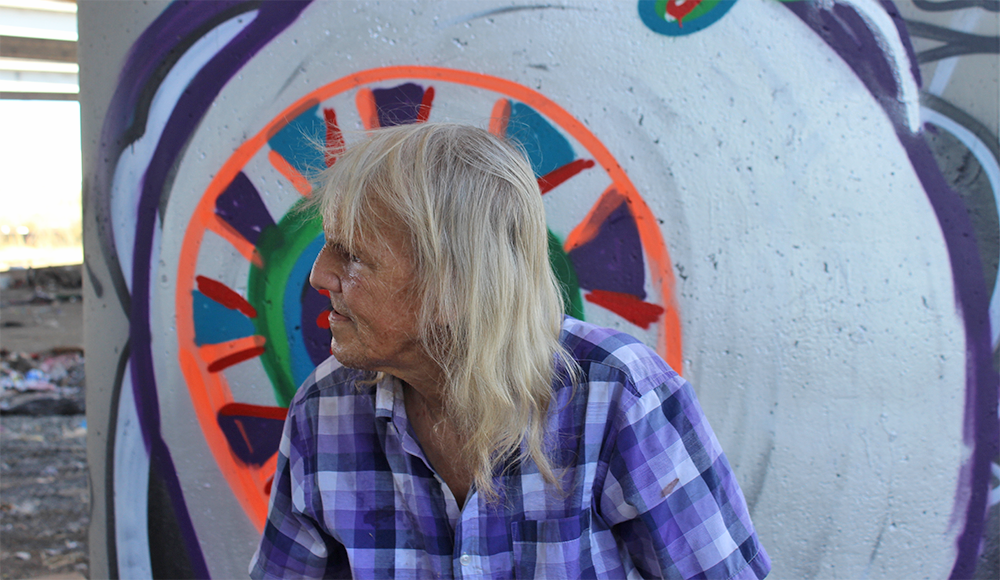 Puffy, a 66-year-old resident who lives on a tract of land owned by Game Changer LLC, stands near the property under the 880 Highway. He is one of the residents who activists are trying to protect from eviction. Photo by Zack Haber.

Bay Area residents have been gathering to stop the Alameda County Sheriff from executing an eviction order against unhoused residents who live on an approximately 1.47 acre tract of land just west of Wood Street in West Oakland.

So far the eviction has not been enforced.

“They were supposed to evict us on Tuesday [Oct 13], but the activists showed up,” said Puffy, an unhoused person who is 66 and claims he has lived in West Oakland since 1989 and on the tract for two years and seven months. He has been out of work due to a disability that makes sustained movement impossible.

Puffy said on Tuesday that Sheriff Officers “drove by, but they didn’t stop.”

Fearing that giving his full name could allow Game Changer LLC, the company that owns the land and petitioned for the evictions, an easier ability to retaliate against him, Puffy declined to give the Oakland Post his legal name. Although seven parties appear on the ‘Notice to Vacate’ that the Alameda Sheriff delivered on Oct. 6, only two full names appear.

Shortly after the ‘Notice to Vacate’ was delivered, the United Front Against Displacement, a direct-action centered housing justice group, put out a call to resist the eviction, which was legally allowed to occur after 6:01 a.m. on Oct. 13. Over 50 protestors responded, showing up at or just after 5 a.m. on that Tuesday.

“We’ve really been focused on preventing the Sheriff’s Officers from entering the lot itself,” said Dale Smith of UFAD. “People are definitely throwing down and that’s a good thing.”

It is currently unclear when Sheriff’s Officers plan to enforce the eviction.

“We are following due process,” said Alameda County Public Information Officer Sgt. Ray Kelly. “We have 180 days to enforce the order. We will enforce when we feel the time is best for all parties.”

Activists are focused on non-violent defense. On Tuesday, they brought about 10 brightly covered shields to defend the land. They set up a canopy for shade, which is next to the Game Changer tract, on land owned by CalTrans near Wood Street and Grand Avenue.

The canopy has been there ever since, from early mornings on weekdays until around 4:00 p.m., the end of the working day. Small groups of protestors who want to help with the defense sit under the canopy, chatting, eating snacks, and drinking water — which they have been sharing with homeless people living nearby — as they keep an eye out for Sheriff’s officers. If officers show up to enforce the eviction, the protestors plan to make a call out to over 60 people who would be willing to show up on-site again.

While Craves has not responded to Oakland Post’s request to comment on this article, Pat Smith of Smith LLP, has agreed to speak on his behalf. She has represented Craves in legal matters related to the tract, which he purchased in March 2016 for about $1.3 million.

Starting in the summer of 2019, Smith has worked with Craves to arrange an 18-month lease for a dollar a year between Game Changer and the City of Oakland. In an interview, she said the lease could be extended after 18 months if both parties agreed and that she envisions the agreement lasting two to three years.

Both the City and Game Changer agreed that if leased, the City would use the tract as a Safe Parking Site for people living in RVs.

“I think the owner feels like he’s being able to do something positive for the City and the homeless,” Pat Smith said.

“He’s clearing this lot to keep making money,” said Dale Smith. “But there’s a lot of people who live on the lot or in the area that have lived there longer than he’s owned the land or tried to develop the land.”

Dale Smith expressed worry that if residents cede the land to Craves, it could eventually displace all the homeless people in the area. The tract, which is now mostly vacant and always has fewer than seven inhabitants, sits in the middle of an area on and around Wood Street, in between 18th and 26th streets, and under and near the 880 Highway that is densely populated by people living in vehicles, tents, self-made homes, and a few who sleep under no cover at all.

No one knows exactly how many people live in the surrounding area, but most people claim well over 100. While some residents could move into a Safe RV Parking Site, the site would be unavailable to those who do not live in vehicles who make up a majority.

The current stand-off is not the first one protestors and Game Changer have engaged in. Game Changer helped the City pay a towing bill in order to clear the tract of land on November 5 and 6 of last year, stating a similar plan to lease the land to the City for a safe parking site.

During the clearance days, about 35 protestors including homeless residents on the land, showed up to a rally against the clearance. A handful of determined residents stayed on the property. This delayed the construction of the Safe RV site.

“A bunch of people showed up with a bunch of people from the camp,” said Puffy describing last year’s rally, “and the dogs started barking and these big burly cops decided they didn’t want to [mess] with all the people or the dogs. So they left.”

Shortly afterward, Game Changer erected a fence around their property and hired a security guard, which has not dissuaded some residents from staying on the site.

In late July 2020, the city released e-mails through public records request indicating that if the City created a Safe RV Parking Site on Game Changer’s land, they would invite some residents in the area to stay on the site but that those who were not invited or who did not wish to join a Safe RV Parking site would be cleared from the area.

No formal agreement currently exists between the City and Game Changer, but the City is still interested in pursuing a lease according to spokesperson Karen Boyd.

“The City is in negotiations to lease the property for the Safe RV Parking Program,” she said. “The timing depends on when/if the property will be free of occupants and personal property.”

It is unclear what will happen to residents at a Safe RV Parking site after Game Changer and the City end a lease. Pat Smith said that would most likely happen after two or three years, but possibly longer, when Craves would then develop the property.

“I realize it’s a finite period,” Pat Smith said. “But hopefully the homelessness problem will start to be addressed more successfully by the city.”

In the meantime, protestors plan to stay on the site to defend against eviction, although they are unclear as to how long they plan to stay.

Mavin Carter-Griffin, who was given a ‘Notice to Vacate’ and claimed she has lived in the area for over eight years, expressed gratitude for their presence.

“They’re here and they’re being really protective, which is great,” she said. “They’re helping to stave off the eviction.”