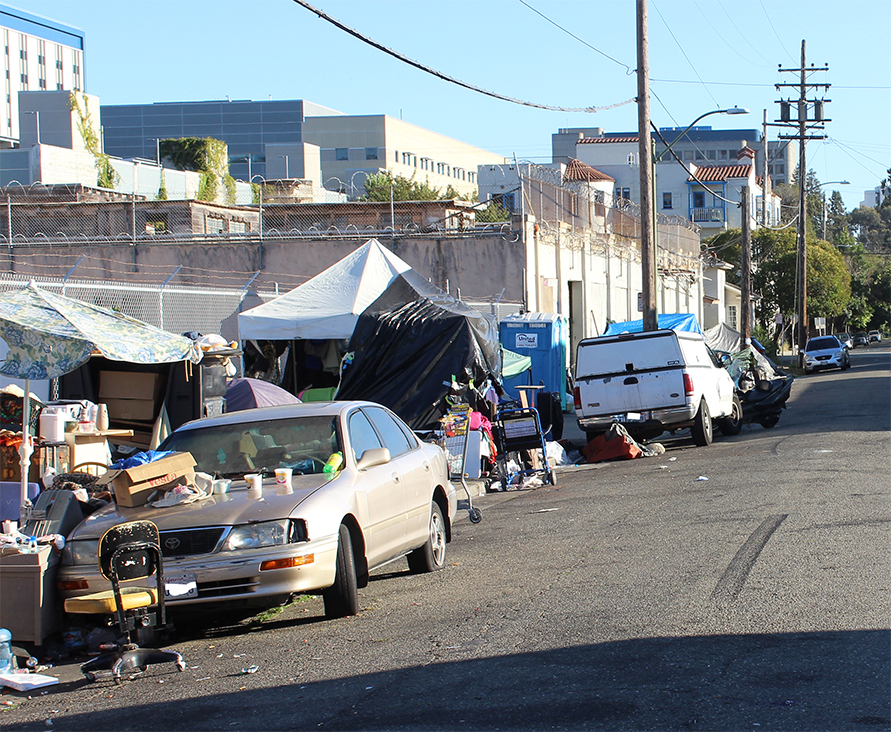 The city of Oakland evicted a large community of unhoused people from Mosswood Park on Feb. 24 and announced plans to help the evicted residents secure shelter through the non-profit Operation Dignity.

While the city did secure shelter for some, others did not receive help, remained homeless, and moved to nearby areas where. In at least one case, tensions have escalated with housed residents.

“It’s a mess—dangerous and unhealthy for everyone. I live on Shafter and now I steer clear of that block,” wrote Valentina Gnup in an online petition that a group called Mosswood Neighbors created in mid-June.

The petition asks that people living in tents, vehicles, and self-made homes along Manila Avenue and between 38th and 40th Streets be moved to a new location and that the city institute regulations that would prevent overnight parking in the area.

It is titled “City of Oakland: Relocate and House the Manila Avenue Encampment” and has over 140 signatures.

Jacob Alexander* currently lives in the encampment on Manila Avenue, which sits less than a quarter-mile north of Mosswood Park, where he had lived for about four-and-a-half years in a tent until the February eviction. Since the eviction, his living situation has not improved. He still lives in a tent, but now on the street, much closer to where housed residents live.

“There was nowhere else to go,” Alexander said.

Alexander said that after the eviction he wasn’t able to move his possessions a long distance and was worried about joining a new encampment. So he and seven other people who had lived within the park moved to their current location. He wanted to move into a hotel or permanent housing but was not offered to do so.

Just before the February eviction, ABC and KTVU reported that Kaiser Permanente, whose Oakland Medical Center sits across the street from Mosswood Park, was giving Oakland $1 million to help house residents who would be moved from the park.

At the time, a section of Kaiser’s webpage said that they were collaborating with The City of Oakland and Operation Dignity to “provide interim housing and support services to 50 residents of a homeless camp at Mosswood Park.”

“So many of us were left behind or fell through the cracks,” said.

He said the first roadblock came when he did not have identification, but Operation Dignity did not then offer him a card or a way to follow up later.

He noticed that some people who received shelter through Operation Dignity’s aid had shown up to the park days before the eviction. He says some people he knew ended up in hotel rooms, others in the city-sanctioned Tuff Shed programs, but others, like him, were denied any aid.

Many who went to the Tuff Sheds found the situation a little different from living on the street and ended up leaving. Some who lived in hotel rooms were able to transition into permanent housing.

Alexander said he did not know why he did not get a hotel room or alternative shelter. “I still would really like to know. I don’t have an answer for that.”

Alexander is sympathetic. He admits to doing drugs and said he feels he needs them to deal with mental health issues. He said since the encampment has grown recently he is a victim of petty theft himself.

Since the city provides no organized place for him and other unhoused residents to put his trash and needles, they accumulate in an unorganized and messy manner.

Some nearby neighbors are sympathetic to Alexander and other unhoused resident’s plight.

“If you’re homeless, God bless you,” said Daryl who lives next to the encampment and chose not to give his last name. “I’m one paycheck away from being homeless myself. My garbage can has been stolen three times, but that’s possibly because the city isn’t providing them with anything to put their trash in.”

Amber Rockwood, who lives nearby, was upset by the petition because she felt it vilified the homeless and called for their displacement. She thinks there are better ways to approach the situation.

“I’ve been trying to introduce myself to the people [experiencing homelessness] to find out what would make conditions better for them and address things that are worries for the neighbors,” she said.

She helped organize a meeting on June 28 attended by six of her housed neighbors, Alexander, Alameda County Supervisor Richard Valle, and housing advocate of the United Front Against Displacement Dayton Andrews.

A few days after the meeting two portable toilets showed up for the encampment. While it is unclear how word got through to the city, Oakland’s Manager of Homeless Services, Lara Tannenbaum, said in a meeting with concerned housed neighbors on July 7, that the city had decided to provide and maintain the toilets.

Oakland resident David Forsyth wrote on the petition, “I have recently seen drug deals go down. This [encampment] needs to be dismantled.”

Rockwood said she wants the city to provide housing, but if it doesn’t she said, “they should be allowed to stay and we should continue the dialogue to figure out what’s causing the problems and how we can help.”

“This is a problem that’s going to be with us…especially with the cost of real estate here,” said Daryl. “I think they should at least get services so they can choose to keep the area clean.”

“The things people are complaining about are definitely valid,” said Alexander. “The thing is, I don’t know what would help or stop it from happening unless we get housing.”

Oakland’s Homeless Policy directors Richard Valle and Peter Radu were asked for comment. Valle did not respond. Radu passed our inquiry on to four other members of Oakland Mayor Libby Schaaf’s staff, including Lara Tannenbaum, but none of them responded.

*Jacob Alexander is a pseudonym. The person speaking with that name asked that the Oakland Post not use his real name because he is seeking employment.

Related Topics:featuredMosswood Park
Up Next