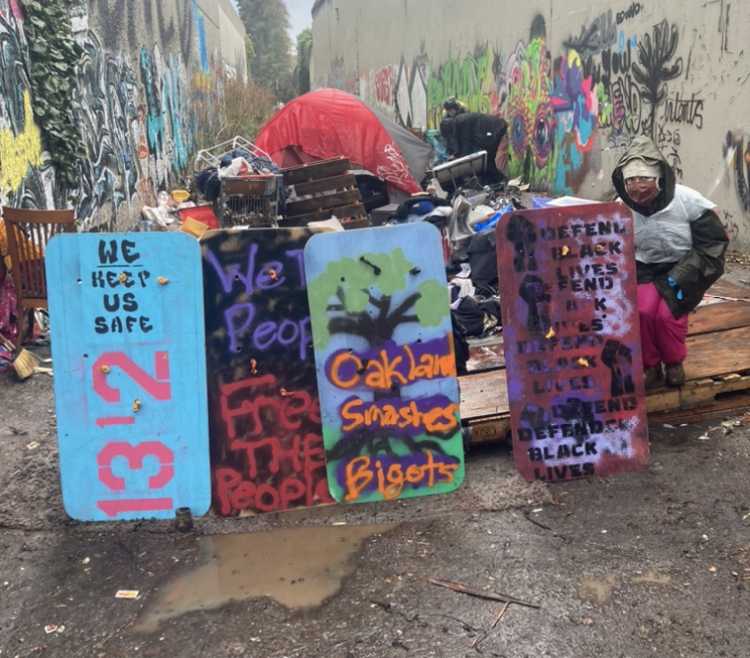 Four protestors crouch behind and hold shields on a tract of CalTrans owned land next to Mosswood Park in North Oakland on January 28. Another protestor, Annmarie Bustamante (right), stands next to the shield holders. A homeless resident (back center right) gathers his belongings during a clearance. Photo by Zack Haber.

While facing intense rain and protests on January 27 and 28, California Highway Patrol officers and California Dept. of Transportation (CalTrans) workers cleared tents, trash, broken branches, and homeless people from a tract of CalTrans-owned land that sits between Mosswood Park and the 580 Freeway in North Oakland.

CalTrans referred to the operation as a cleaning. Activists, local civil rights lawyers, and the site’s residents called it an eviction. Two residents successfully resisted being removed from the site and stayed on the tract of land.

“They posted signs saying everybody has to get off the property,” said Osha Neumann, a lawyer with the East Bay Community Law Center who was at the tract on January 27. “To me, that’s an eviction. There’s no question the intent was to displace people.”

CalTrans posted a NO TRESPASSING notice on January 25. Printed words stated the site was scheduled for cleaning on January 27. The date “1/28/21” was also added in blue pen ink.

In an e-mail to Oakland resident Charlotte Ashlock, who inquired about the operation, CalTrans Deputy District Administrator Cheryl Chambers claimed a resident was tapping into a CalTrans electrical panel, which affected 30 streetlights in the area and initiated the clearance.

“During the pandemic, CalTrans is only moving people…if there is an emergency to life or infrastructure as happened with the electrical tap at Mosswood” she wrote.

Caltrans public information officer Janis Mara told The Oakland Post that the cleaning was done because “illegally compromising electrical components poses a fire hazard to those in the area and threatens the integrity of the infrastructure.”

Neumann believes, despite the illegal tapping, CalTran’s actions were not fair to the residents.  “Making everybody leave because somebody tapped into electricity is like requiring everybody in an apartment complex to vacate because one tenant is running an illegal extension cord out the window to a socket in the basement,” he said.

By January 29, the vast majority of the tract’s residents moved about 40-60 feet away into Mosswood Park.  Mara reported that “Caltrans requested assistance from the City of Oakland to provide social services and outreach in advance of this removal,” but no residents reported being offered alternative shelter.

Two residents, who lived in a small home they had made mostly out of recycled wood and plastic, remained in their home and on the site despite the order to leave. John, who lives in the home, thinks it is not a threat to CalTrans or public health.

The Caltrans-owned tract of land where John’s home sits is smaller than the tennis court it rests behind and is forested with pine and acacia trees. John said he has been on the site on and off for five years because it’s “out of the way.” During the warmer months, thick foliage often makes the area invisible to those outside of it.

On January 27, John and his roommate told CalTrans workers and CHP Offices that they did not plan on leaving. About a half dozen protestors supported them that day.

“I’ve just had them move me around enough,” John told The Oakland Post. “They play musical chairs with everybody, give 5% of the people housing, then take it away a few months later.”

John had been cleared from the area before, but he and his roommate stood firm during this operation and protestors aided them. On January 28, about 20 protestors showed up despite heavy rain. Ten of them held colorful wooden shields. Six of the shield holders stood outside.  John and his roommate’s home while four others stood outside another resident’s red tent as he gathered his belongings. About a dozen and a half CalTrans workers gathered and cleared trash and tree branches from the area. Occasionally, workers fell in the slippery mud. A few CHP officers monitored.

The resident who lived in the red tent, who asked not to be named for fear of police retaliation, did not resist the clearance. But the protestor’s presence allowed him extra time to clear his possessions. In the past, CalTrans had destroyed possessions he wished to keep in similar operations.

“This has been one of the best times in terms of being able to salvage my possessions because of the help of the volunteers,” he said. “It was nice to have advocates have our back.”

“They’re clearing debris but also some belongings,” said a protestor while holding a shield January 28. They also asked not to be named due to fear of police retaliation.

“We just want to be sure they don’t touch people’s structures. Threatening people’s ability to shelter themselves at a time like this is appalling.”

CalTrans has a documented history of destroying homeless residents’ belongings during clearances. They agreed to pay $5.5 million in February 2020 to settle a lawsuit that Neumann worked on, Sanchez V CalTrans, which accused the department of illegally destroying homeless people’s property during sweeps in Oakland, Berkeley and Emeryville between December 2014 and October 2019. At least 1,200 people in Oakland, Emeryville and Berkeley said CalTrans destroyed their possessions and have filed claims.

According to John, there had been 20 people living on the CalTrans tract, but most left on January 27 due to feeling intimidated. A protestor, Annmarie Baustamente, who was on the track during both days of the clearance said that some residents were absent during the clearance. She saw CalTrans bag and store people’s items that appeared to be worth more than $50 but worried about residents losing other items that had sentimental value. Bustamante, along with several residents, also expressed worry about a resident who uprooted herself and all her belongings due to the clearance days after her partner died. Neumann said he talked to a resident who lost personal artworks and art supplies that were important to him.

Andrea Henson, a lawyer with the Oakland’s Eviction Defense Center who was on the tract on January 28, said she was appalled to see CalTrans throw away a hand-washing station. “If they were doing a cleaning, then shouldn’t the handwashing station have been moved aside or replaced?” she asked.

Caltrans Public Information Officer Janis Mara’s claimed the wash station was “inoperable and beyond repair.” In her e-mail, CalTrans Deputy District Director Cheryl Chambers said the department allowed one resident “to remain onsite due to his health concerns.” Both lawyers who were onsite, Henson and Neumann, said they thought the reason John’s home was not torn down was the protestors’ presence and John and his roommate’s determination to stay.

“The only reason that the house wasn’t torn down was the protest,” said Henson.

During the clearance, Neumann spoke to the commanding officer on-site and tried to persuade him that tearing down John’s home during the storm and under COVID would look bad for CalTrans and harm the residents. Neumann asked for time to work out solutions to problems CalTrans had with the encampment.

“He listened,” said Neumann, “but I didn’t change his mind. What changed his mind was the presence of eviction defenders.”

By February 2, at least three residents had moved back unto the CalTrans owned land.