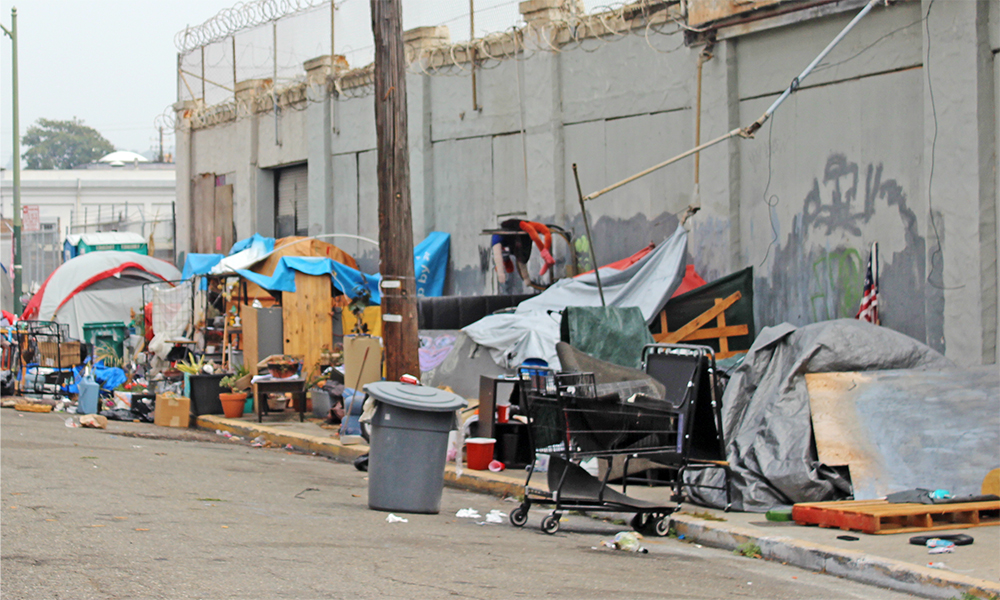 Tents and self-made structures that sit along Manila Avenue between 38th and 40th Streets. Behind them, sits an abandoned glove factory the City is planning to demolish. Photo taken on Aug. 25 by Zack Haber.

The clearance is set to affect about 15 unhoused residents who live along Manila Avenue between 38th and 40th Streets near the Temescal neighborhood of North Oakland.

Current plans would force some residents to move but will still allow them to live on Manila Avenue, forcing all unhoused residents in the area to live closer to each other.

People started living on the street in the location in February after the City of Oakland evicted them from Mosswood Park. Although Kaiser Permanente donated funds to the city to offer shelter to evicted residents, many felt that the shelter offered was not allocated fairly. They claim that some people were offered hotel rooms, others were offered space in the city’s Tuff Shed Program, and others were ignored.

Kat Wadsworth,* who initially moved to Mosswood Park to flee abuse from a partner and  then moved to Manila Avenue after the eviction, said Operation Dignity, the non-profit that arranged shelter allocation for the city, was hesitant to reach out to “the ones of us that had been there for a long time and we’re kind of rougher around the edges.”

Wadsworth said the people who got the first pick for shelter were people that appeared cleaner and were “really new to being on the street,” while those who were “not embarrassed to be a little dirty” got the last pick or were ignored.

Wadsworth said she wanted a hotel. She was offered space in the Tuff Shed Program but did not feel safe being in a small space with a roommate she did not know, which the program would have required her to do.

So she, along with a handful of others, moved just north of Mosswood Park to Manila Avenue. Since then, one of the former Mosswood residents has died and a few have moved away. Five remained and unhoused residents from other parts of town have moved into the area.

The plan to relocate Wadsworth and other nearby residents were directed by city administrators appointed by Mayor Libby Schaaf and could violate a resolution written by Oakland City Council President Rebecca Kaplan and passed unanimously by City Council on March 27. It requests that the city administration follow the Center for Disease Control (CDC) guidelines for responding to COVID-19.

“Unless individual housing units are available, do not clear encampments during community spread of COVID-19,” reads the resolution.

The resolution further specifies that causing people to leave their fixed location during the pandemic “increases the potential for infectious disease spread” and also requests that the city administration “encourage people staying in encampments to set up their tents/sleeping quarters with at least 12 feet X 12 feet of space per individual.”

In an e-mailed response to questions from The Oakland Post, Kaplan said she thought the March 27 resolution as well as another resolution the City Council passed on April 17, 2018, provide “for more effective strategies around homelessness.”

“The strategy that the Mayor has been pushing for, of just pushing people around with no strategy of where they should go, is very expensive, uses huge amounts of police time and other public resources, and fails to solve the problems,” Kaplan said.

Kaplan also questioned whether or not the city administration has “the power to override council direction,” and further asked, “if so, by whose authority?”

Oakland’s Homeless Policy Director Peter Radu, as well as Justin Berton, a spokesperson for Schaaf, did not respond to questions asking if the city intended to follow the council’s resolution encouraging them to follow CDC guidelines.

The plan to clear the unhoused residents comes after an online petition, which called on Schaaf, City Councilmember Dan Kalb and the non-profit Operation Dignity to relocate residents.

The petition specifically pointed out that some residents were staying outside of an abandoned glove factory that has toxic chemicals inside and expressed worry about fire hazards. California’s State Water Resources Control Board classified the site as a clean up program site in 1993.

An e-mail from Deidra Moss, who works as Kalb’s Constituent Liaison, said Kalb is working with the city to demolish the building.

“Councilmember Kalb has worked with city staff to get an encroachment permit for the owner of 3920 Manila Ave.,” reads the e-mail, which Moss sent to a person who made an OAK 311 Report and lives near the abandoned factory and the unhoused residents.

“This is just the first step in getting to the demolition of that property,” Moss also wrote in the e-mail.

When questioned, Kalb claimed he did not seek the encroachment permit.

Although Kalb did not personally seek the permit, he said he reached out to City staff about it, claiming concern for fire hazards and referenced a fire that occurred in the area on July 8, 2020. He also said, in addition to an abandoned factory, a lumber yard sits on 40th street and Manila Avenue.

“My office reached out to city staff about the encroachment permit because I feel that the property being in proximity with an encampment that has already experienced one fire poses a real risk of a devastating fire, and we were lucky that the July 8th fire did not spread to this property,” Kalb wrote.

The City’s stated plans demand that those living outside the building move. Residents in that location live in tents or self-made structures. Across the street from them, those living in RVs found orange tags on their vehicles on Aug. 24 demanding they move their vehicles in 72 hours.

“If the vehicle cannot be driven, please arrange for it to be towed,” reads the tag. “If it is not removed, it will be towed to a garage by the police and stored at the owner’s expense.”

Those residents just north of the abandoned factory got notices saying that the City is planning a deep cleaning on Thursday but were not informed that they would have to permanently leave the area.

Local advocates for unhoused residents are questioning the timing and intention of the planned clearance and demolition especially as Oakland’s air quality index unpredictably reached particulate matter concentrations classified as unhealthy by the Environmental Protection Agency due to smoke from wildfires throughout California.

“It’s unacceptable to be making people move at all when there’s a global pandemic and Oakland is in the middle of an air quality emergency,” said Talya Husbands-Hankin, of Love and Justice in the Streets, a volunteer-run unhoused advocacy organization.

Needa Bee of The Village in Oakland, a group of unhoused residents and advocates for unhoused resident’s rights, said “We have two health emergencies happening. We have the air quality emergency and the pandemic. This does not seem like a sound, medically informed decision.”

Radu and Berton did respond to direct questions about whether the clearance plans would be delayed due to the air quality.

One unhoused resident, who asked not to be named,* said the smoke was the least of his worries and that he was more concerned with other daily problems involving the instability of not having a home. He expressed skepticism that the city would follow through on its plans on Thursday and regretted doing work to move his belongings that might end up being useless.

As it stands at press time, the operation has not been canceled.

City Council District 5 candidate Zoe Lopez-Meraz and The United Front Against Displacement, a mutual aid and protest group that advocates for housing justice, have called for residents to show up to document and support unhoused residents during the operation.

“I’ll be there on Thursday to make sure that the city does not violate people’s rights or harm or further traumatize people,” said Bee.

*Kat Wadsworth is a pseudonym. Both unhoused residents in this article asked not to be named because they feared being exposed as homeless could hinder their chances of securing housing or employment in the future.