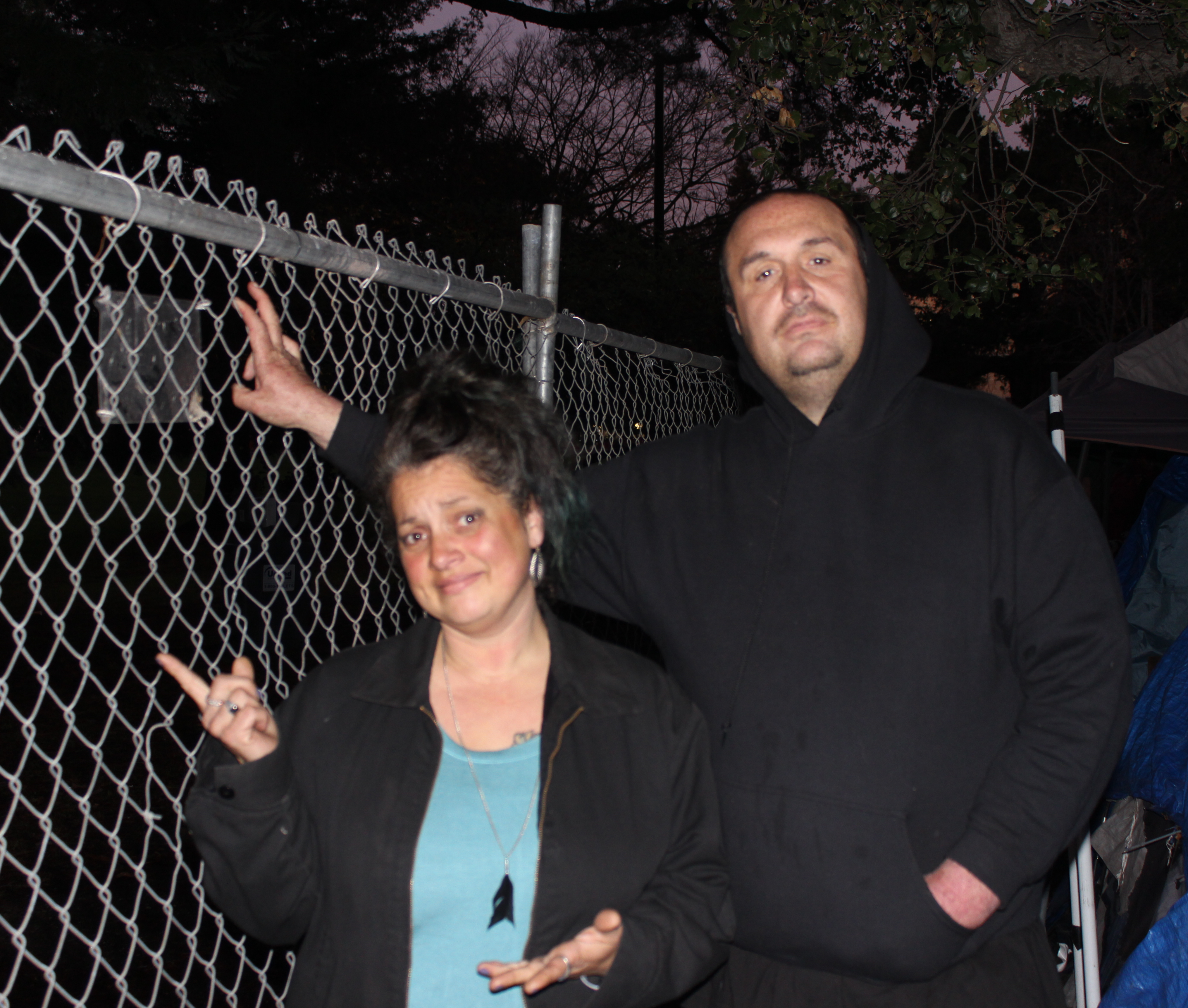 Operation Dignity has installed a fence around those living in approximately 60 tents at Mosswood Park and has a goal of connecting those living in the area with housing by Jan. 31. Pamela Gonzalez Wells (left) and William Wells live in the park and are skeptical about the project.

On Tuesday Dec. 4, workers for Security Contract Services installed a fence surrounding a community of unhoused residents who live in tents at Mosswood Park in Oakland, directly across from Kaiser Permanente’s medical center.

The fence is part of a project organized by Operation Dignity, a non-profit that regularly contracts with the city to offer services to unhoused people. They also inform communities of unhoused people about evictions and city run cleanings.

“The fence makes this place feel like a refugee camp,” said William Wells during an interview with The Oakland Post at Mosswood Park. He’s lived in the park with his wife, Pamela Gonzalez Wells, for the last 14 months.

The couple helps the community both by regularly cleaning the park and by maintaining a food table where residents can almost always find a meal. Most food they serve is donated by people who live outside the park.

The fence, which runs along almost an entire block of Broadway and surrounds approximately 60 tents, originally had green cloth attached to which made it impossible for those passing by to see those living in tents. Although this provided some privacy, Mosswood’s residents started tearing the green cloths down after four days as it prevented those who donated food from knowing residents were still living in the park.

“People from all over the park came and said they’re hungry,” said Pamela. “It was four days and there was no food. It’s because they didn’t know we were here.”

Unhoused residents in the park say representatives from Operation Dignity brought pizza and visited them on Wednesday Nov. 27 to inform them of the plan.

“They told us that their goal was to get everybody that’s in this fenced area some sort of housing by Jan. 31st” said Charice Jimenez, who’s lived in a tent at Mosswood Park for a year and a half. “My understanding is Kaiser just doesn’t want us here and so they’re willing to pay to get us gone.”

Residents claimed that Operation Dignity informed them they were working with Kaiser to find housing options for the residents and to make the community less visible.

“They said they were putting it up because Kaiser’s patients were scared,” said Jimenez. “I feel like we’re tigers. They’re scared of the tigers and so they put them in a cage to make sure everyone’s contained.”

In an email to The Oakland Post, Kaiser Permanente’s Northern California Director of Strategic Initiatives, Angela Jenkins, stated that “housing plays a critical role in supporting individual health” and confirmed that Kaiser was working with Operation Dignity to find housing for those living in Mosswood. She didn’t comment on the fence.

“We are working with Operation Dignity to provide the encamped residents at Mosswood Park with housing navigation support, one-on-one case management and housing problem solving services, funding for two 24-hour security guards, storage for belongings, and flexible and funding to help with move-in costs,” wrote Jenkins.

Mosswood Park’s residents regularly use Kaiser’s toilets and microwave before 8 pm, when the center closes down for all but emergency room services. Occasionally residents register to see a doctor in the ER even when they don’t have a pressing medical issue just so they can access the toilet. Jimenez claims she did this once, but would never have had to if the city of Oakland hadn’t locked the public toilets at the park.

Operation Dignity has also arranged for security guards to work on the site all day and night with the purpose of preventing additional people from setting up tents within the fenced off area. They usually stay in a vehicle by the fenced off area’s entrance and exit.

Residents within the park expressed skepticism that they would secure housing through Operation Dignity’s program. Pamela and William both claim they asked Operation Dignity’s representatives if they could sign a contract guaranteeing alternative housing options if they left the park by Jan. 31 but have been unable to get one. They also say Operation Dignity’s housing options posed during the Nov. 27 meeting included moving to Sacramento, Merced or Vallejo, utilizing the city’s Community Cabins site which houses residents in sheds, and organizing groups of six people together to live in houses, two to a room, so they’d have enough money to pay rent regularly by pooling money together.

Pamela was concerned that there seemed to be no plan for employment. Many residents at the park are unemployed and, although Pamela and William both make regular income by selling used clothes, they claim that it would be hard to convince a landlord to rent to them.

“What if all this is to get us out and then nothing happens?” said William Wells.

The Oakland Post emailed Tomika Perkins, Operation Dignity’s Operations/Outreach Director twice for comment, but has not heard back. We also emailed Maraskeshia Smith, The City of Oakland’s assistant city administrator, to ask about the city’s involvement at Mosswood but we haven’t heard back. We will update their comments into the online version of the story when and if they comment.

COMMENTARY: Write Your Own Obituary. Your Life Depends on It.