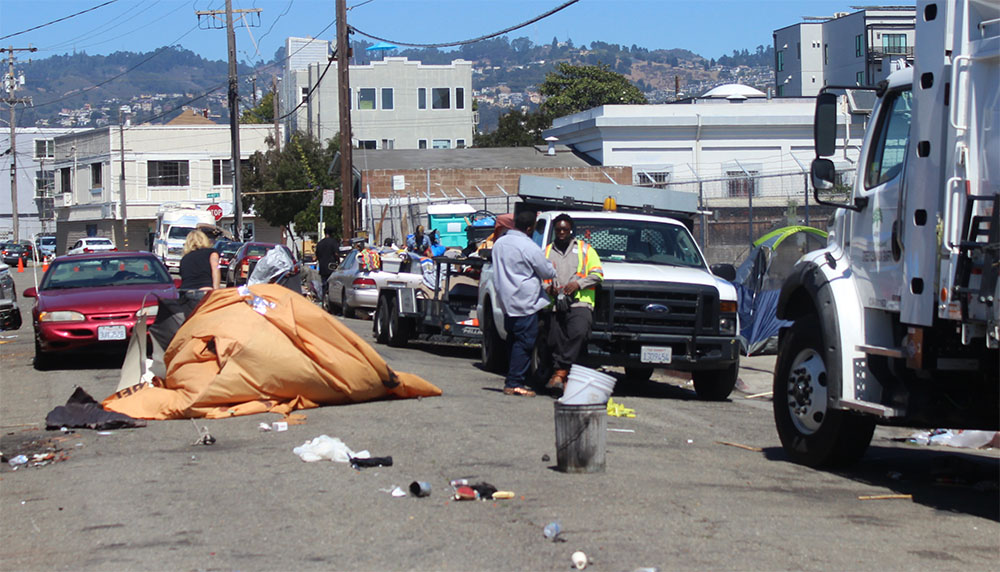 An unhoused Oakland resident drags her tent to a new location during a city-run relocation and cleanup at Manila Avenue in North Oakland on August 27. Photo by Zack Haber

On Aug. 27-28, The City of Oakland cleared five residents who were living in tents from Manila Avenue near Mosswood Park, but allowed them to move 300-400 feet north.

The City also conducted a deep cleaning on Manila Avenue between 38th and 40th streets, in an operation that directly affected about 15 unhoused people living in the area.

Prior to the day of the clearance, the City’s plans were still unclear to unhoused residents in the area and advocates.

The City began the relocation operation on August 21 by placing pink “notice to vacate an illegal encampment” flyers near the five residents and throughout the surrounding area where other unhoused residents, who later were not required to move, lived.  Then, on August 24, the Oakland Police Dept. placed orange parking violation stickers on RVs and vehicles that serve as people’s homes in the area, instructing them to move their vehicles by Aug. 27 or face impoundment.

But just before 4:00 p.m. on Aug. 24, Oakland’s Homelessness Administrator Daryel Dunston sent an e-mail to City Council members, City administrators and members of Mayor Libby Schaaf’s media team, which set out plans that contradicted the original flyers and notices.

“I am writing to clear up any miscommunication regarding the encampment operation scheduled tomorrow at 38th & Manila,” reads the e-mail, which stated that the City “will be conducting a cleaning.”

“No one’s vehicle dwelling will be towed,” Dunston wrote and specified that only people living within a small “collapse zone” of a building set to be demolished would be relocated.

Five people living in tents and one person living in a vehicle lived in the collapse zone and the City forced them to move on Aug. 27. On the same day, the City did a deep cleaning of the east side of Manila Avenue, which required residents to temporarily move their belongings or have them discarded.

Until the day of the operation, neither the City nor OPD informed residents that the plans initially stated on the flyers or parking violation stickers would not be carried out.

One resident said he thought they had to leave and drove his vehicle around the corner a day before the operation. He described the move as easy but he also noted that his neighbor, whose vehicle did not run, arranged a tow to keep her home safe, an expense and an effort that ended up being unnecessary.

During the clean-up and relocation operation, some residents said they felt rushed and that the City did not give them adequate time to safely move their belongings. One resident lost a prescription for his dog. Another resident’s tent was damaged while she was relocating. A local grassroots organization, the North Oakland Restorative Justice Council, brought her a replacement tent the next day.

About 25 residents, most of whom were housed, showed up on August 27 to help residents with the move and clean-up, including some people from the neighborhood and others from East and West Oakland.

About a half dozen showed up on August 28, when the City did a smaller clean-up operation on the west side of Manila Avenue and no one was moved. One resident reported losing her living room on Friday after the city forced her to remove a tent from a seldom-used sidewalk. She now lives exclusively in her vehicle.

“I showed up to help people move their stuff and protect their rights because often times if they’re left alone, [the City], can steamroll people,” said Colleen Donovan, a 26-year-old Oakland resident and member of the United Front Against Displacement, a mutual aid and housing justice grassroots organization. “It helps when there’s pressure and [the City] realizes housed residents of Oakland are paying attention.”

Several police cars and officers were present who monitored but did not engage with any unhoused residents.

Residents questioned why the operation was scheduled while wildfires throughout California had caused smoke to blow into Oakland, at times making the air quality unhealthy.

“The air is trash,” Amber Rockwood, a housed neighbor in the area wrote on Twitter after seeing City workers posting flyers. “How are they really gonna evict some houseless people during all this.”

The Oakland Post has chosen not to name the unhoused residents in this area, many of whom have claimed that publicizing their unhoused status could make it difficult for them to receive housing or employment in the future.