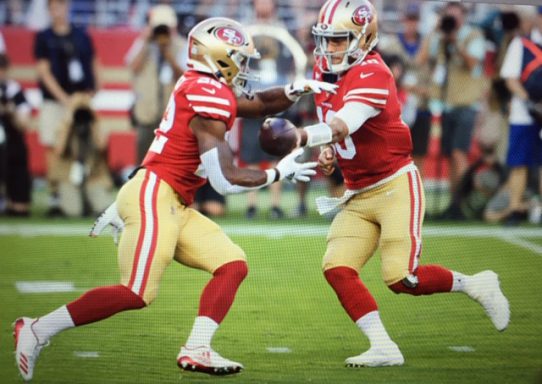 Santa Clara – An impressive start, and a great performance for the 49ers on a big stage for Monday Night football.  Outstanding on both sides of the ball, San Francisco joins the ranks of the elite for week five.  They are the only undefeated team in the National League while the New England Patriots holds the crown in the American League.

The 49ers 31-3 victory over the Cleveland Browns is their best start since 1990 and the fourth best in franchise history.  Matt Breida scored twice in one quarter.  Baker Mayfield threw two interceptions, fumbled and was sacked four times.  The defense was so dominant, the Browns only kicked one field goal the entire game.  Maybe not the best decision to start with a trick play.

“It was unfortunate,” Mayfield said.  “I put it in perspective of it could’ve been points for us, but instead it’s taken away and you’re not getting any out of that.  That’s huge for momentum on the road.  They already had points on the board.  You look back at it and yes it’s unfortunate, but I could’ve been more accurate with the ball.  Honestly, it’s more than just one play that turned the game around.”

Cleveland used a trick play on opening drive, Odell Beckham threw a short pass to Jarvis Landry for 20 yards.  Mayfield then went deep to Ricky Seals-Jones for 31 yards catching the ball out of bounds.  San Francisco challenged the call.  After further review, the call was overturned and it was 4th down for the Browns.

“It helps when you get explosives,” said Kyle Shanahan.  The first play to start that out, to get 80 right there is obviously a big lift and helps your stats when you get that.  But, having the lead.  The defense playing that well, being able to run that much.  Some of the looks we did, I thought we blocked hard.  We played very physical and it seems like the backs all hit the right hole.”

On San Francisco’s opening drive, Brieda rushed for an 83-yard touchdown making it a 7-0 game.  On Cleveland’s next drive Mayfield threw a pass intended for Antonio Callaway that was intercepted by Richard Sherman.  A 15-yard penalty for a face mask moved the ball down field for the 49ers.  That setup Jimmy Garoppolo’s 5-yard touchdown pass to Brieda extending their lead 14-0.

“A big hole.  I saw a big hole,” Breida said.  “The offensive line, and the receivers did a great job of blocking.  The play worked out how it was supposed to.”

DeForest Buckner forced Mayfield to fumble before he found an open Callaway in the end zone for the second time today.  Callaway bobbled the ball losing control, while K’Waun Williams recovered it and rushed it back for 49 yards.  That setup Tevin Coleman’s 19-yard touchdown extending the 49ers lead to 21-3.

By the third, the 49ers picked up where they left off and used their running game that was most successful against the Browns tonight.  Garoppolo then connected with George Kittle for a 22-yard touchdown in the end zone.  After missing three field goals for 47, 52 and 30 yards, Robbie Gould saw the light at the end of the tunnel.  His fourth field goal for 44 yards was good.

“That’s something I’ll talk to them all about,” Shanahan said regarding missed field goals.  “I know, personally, I saw at least one rough snap that looked very hard for Robbie to get off.  I know all the others weren’t perfect by any means.  There’s three people involved in it.  I know we had a block.  It looked like they came off the wing, off the edge.  So I’m not exactly sure, but definitely wasn’t good enough.  It was probably one of our worst games in terms of, I don’t know about the whole special teams, but obviously in kicking.”

“They got a lot of weapons of the offensive side,” said Buckner.  “But coming into this game we weren’t really thinking about all the talent they got, all that kind of stuff.  We have been playing really good, like [CB Richard] Sherman has been saying, championship defense.  We just had to come in, we knew it was coming off a bye and we knew in the past we been coming out on byes a little lackadaisical and stuff.  So, we just had to come in with that same energy and focus on ourselves and what we can do better on defense and it came to light on Monday night.”