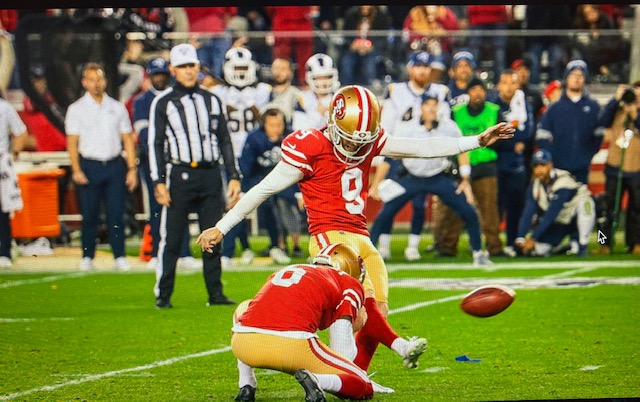 Santa Clara – An explosive game between two teams desperate for a win tonight.  A pick six put the 49ers ahead for first time in the game but a crucial turnover to start the second half gave the Los Angeles Rams momentum.  A field goal tied the game with 2 minutes left on the clock.  And Robbie Gould kicked the winning filed goal.  The NFC is a tight race for the playoffs, every win is important.

The 49ers 34-31 victory over the Rams was the win they needed after coming off a loss to the Atlanta Falcons last week.  The final game of the regular season is against their rivals, the Seattle Seahawks.  The playoffs start with them, a team that handed San Francisco their first loss in overtime after going undefeated for eight games.

“Obviously, we had to beat the Los Angeles Rams for that game to matter and now that we beat the Rams, that will be a big-time game,” said Emmanuel Sanders regarding the Seahawks.  “I am looking forward to sitting at home and watching these guys play tomorrow, watching film, preparing all week and hopefully we can go out there and leave with a W.”

LA came out ready to play, on opening drive Jared Goff completed a seven play drive that ended with a 10-yard touchdown pass to Brandin Cooks for a quick 7-0 lead.  On the next drive, Richie James Jr. rushed for 81 yards on a punt return putting the 49ers in great field position.  Unable to get into the end zone, Gold kicked a 26-yard field goal making it a 7-3 game.

Later in the quarter Jimmy Garoppolo went deep to Sanders but his pass was intercepted by Jalen Ramsey who returned it for 13 yards.  A crucial turnover for San Francisco led to a Rams touchdown.  Goff went deep to Cooper Kupp for 28 yards, moving the chains.  Then he rushed for 2 yards on a quarterback scramble, Richard Sherman was charged with a late hit.

“I think we made some adjustments on that which I think was definitely needed,” head coach Kyle Shanahan said.  “From what I saw in the second half, it looked like we slowed them down a number of times on those roll outs.  They had a good plan for us, we were playing sound in the run game and when you play sound in the run game that’s usually what you give up, the bootlegs and things like that.  We had to make a few adjustments and they had a good plan, but I think we were able to slow it down enough in the second half.”

San Francisco keep it a competitive and scored with 2:21 left in the first half.  Raheem Mostert rushed for a 16-yard touchdown making it a 21-17 game.  A crucial turnover to end the half for the Rams, Goff’s pass intended for Malcolm Brown was picked off by Fred Warner who rushed it back for a 46-yard touchdown to give San Francisco their first lead of the game making it a 24-21.

“Yeah, honestly, I just did my job,” said Mostert.  “We were in man coverage and the back kind of, he checked in the protection and then ran a flat route.  I hugged up on him and I think [Los Angeles Rams QB] Jared [Goff] probably would want to have that one back, but he just tossed it up and I took it. I took it home.”

To start the third, San Francisco committed another turnover but it didn’t prove to costly, Garoppolo’s intended pass for Sanders was intercepted by Darious Williams.  LA struggled to move the ball and Greg Zuerlein missed a 52-yard field goal.  Goff made up for it when he connected with Kupp for a 22-yard touchdown giving the Rams a 28-24 lead.  By the fourth, Garoppolo went deep to both George Kittle and Sanders for 36 to setup Kittle’s 7-yard touchdown making it 31-28 game with 6:06 left on the clock.

Another field goal attempt by Zuerlein for 52-yards tied the game 31-31.  Despite getting sacked for the fifth time, Garoppolo went deep to Sanders for 46 yards with less than a minute to play.  That play was enough to take a knee and run the clock for Gould to come in and kick a 33-yard field goal for the win.  This win wasn’t just about playoff position.  One of their own is hurting.  Backup quarterback C.J. Beathard lost his younger brother who was fatally stabbed in a fight early Saturday morning in Nashville. And the team won this for him.

“Before we start, I just want to say how much we appreciate the Beathard family,” Shanahan saais.  “What happened last night was very tough on [QB] C.J. [Beathard] and his family.  It was a tragedy.  Such a great family.  We’ve been with C.J. here for three years.  He’s as good as any person I’ve been around.  Their family is unbelievable.  I never got a chance to meet Clay, but knowing how his parents are, knowing how C.J. is, knowing the stuff they’ve told me about him, he was an unbelievably special person.  Just our hearts and prayers are out with them.  His dad reached out to us on text just about how great everyone has been on social media and just the respect everyone has given their family and stuff, he can’t appreciate it enough.  I think everyone understands how horrible a thing that happened to their family last night. Our prayers are with them.”

A’s give back to the community

COMMENTARY: Marvin Miller gets to the Baseball Hall of Fame…but no Curt Flood