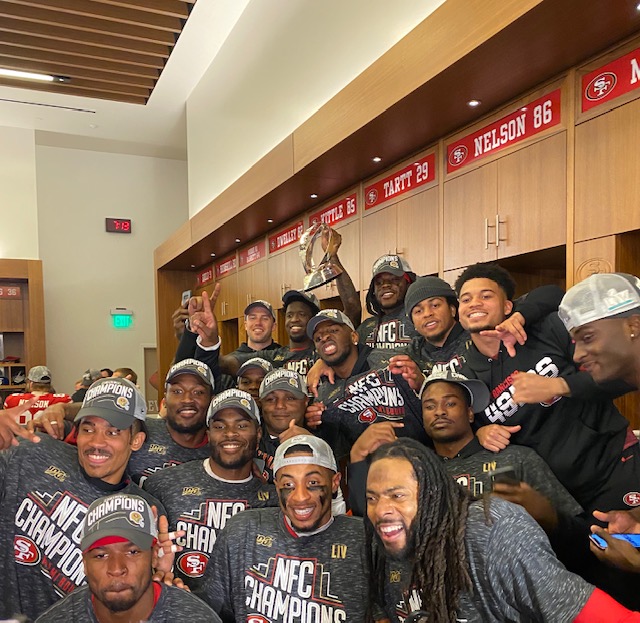 Santa Clara – The 49ers have punched their ticket to the Super Bowl.  After a dominating first half, it was clear only one team showed up to play.  Raheem Mostert scored four touchdowns, San Francisco’s defense forced three turnovers and Richard Sherman’s interception in the final minutes was the icing on the cake.  The running game was unstoppable and the reward, a trip to Miami for Super Bowl Fifty-Four.

“Still surreal. You know, I just — I can’t believe that I’m in this position right now and I did the things that I did tonight,” said Mostert.  “And I would like to thank God first and foremost for blessing not only myself but everybody in the organization to be in the position that we’re in, to get the win and to move on to Miami, my home state.  And I can’t believe it.  I’m still being able to play at my home state.  This is so surreal right now.”

The 49ers 37-20 victory over the Green Bay Packers was well deserved.  A phenomenal season where the team went undefeated through eight games before they recorded their first lost to the Seattle Seahawks.  Now, they return to the Super Bowl after a rebuilding period during the Jim Harbaugh years.  Harbaugh took San Francisco to the Super Bowl back in 2012 where he lost 34-31 to his brother John Harbaugh and the Baltimore Ravens.

“This is like everybody coming to work,” T Joe Staley said.  “The attitude that everybody has every single day.  There are no egos.  Everybody generally pulls for each other.  No one cares about what credit that they get. [49ers QB] Jimmy [Garoppolo] doesn’t care if he throws for 300 yards or what did he pass today for 50-60?  He doesn’t care and same with the running backs.  [49ers TE George] Kittle is a superstar and he could care less about his stats.  Top to bottom everybody just wants to pull for each other and win.  It is just a special bunch.”

A special bunch indeed, the chemistry on this team began in preseason and became stronger with each game.  Almost every game, the team gave it their all.  Tonight, the offense rushed for 285 yards and 4 touchdowns on 42 attempts.  The team’s 285 total rushing yards were the second most in postseason franchise history, and the 6th most by any team in the postseason since 1970.

“The lanes that we saw and the way he was running, just wanted to keep feeding him,” said head coach Kyle Shanahan. Raheem is not someone who is going to come up and tell me a bunch during the game. I know he was feeling it and it wasn’t too hard to see.”

The 49ers got off to a rocky start after going with their running game on opening drive.  Tevin Coleman had 5 attempts for 17 yards but the Packers forced them to punt.  On the next drive, the 49ers went with their passing game before Jimmy Garoppolo handed off a pass to Mostert for a 36-yard touchdown.  Green Bay’s offense completely collapsed in the first, Nick Bosa recorded the first sack on Aaron Rodgers.

“Not getting that first third down didn’t quite help for sure,” Rodgers said. “We just weren’t very consistent in the first half. I made a couple of mistakes, personally, that hurt us. We kind of let it get away from us.”

[On the botched snap] “It didn’t help. We could’ve cut that to two scores there at a minimum. It was like the fourth down snap the first time we played them. It was a big turning point.”

DeForest Buckner recovered Rodgers fumble and that led to Robbie Gould’s second field goal making it a 20-0 game to start the second quarter.  Another turnover proved costly for Green Bay.  Rodgers pass was intended for Geronimo Allison, but Emmanuel Mosley intercepted the ball.  With 50 seconds left on the clock, Mostert rushed for an 18-yard touchdown to end the half with the 49ers leading 27-0.

By the third, the Packers came alive with Rodgers connecting with Aaron Jones for a 9-yard touchdown.  Jones also rushed up the middle for a 1-yard touchdown giving Green Bay another scored run.  Rodgers then went deep in the fourth to Jimmy Graham for a 43-yard touchdown making it a 34-20 game.  But Green Bay couldn’t stop Mostert’s fourth touchdown  that extended San Francisco’s lead 34-7.  And Gould’s 42-yard field goal was the final score to cap off an outstanding victory.

“I think you go back to OTAs, man,” Said Buckner.  We all knew we could be a special group, a special team this year.  And just seeing the guys work, work through a lot of things from OTAs, to training camp and preseason.  The guys just fed off of each other, you know what I mean?  Offense, defense special teams, everybody.  We’ve got a lot of selfless guys playing for each other.  That’s the key ingredient being able to play for your brother next to you, no matter what happens.  Doesn’t matter who gets the stats or anything.  We’re just trying to go out there and win football games and I think we have a really special group.”

“Yeah, I mean we keep it fun,” Sherman said.  “We keep it loose.  There were a few people that came in our locker room for the first time throughout the week and they were like, ‘Man, this is the loosest locker room.’ You would think this is a winning team.  But, that’s the difference. That’s the difference when you’re confident, when you know what you’re playing for, when you know what you’re doing, when you’re locked in.

You don’t have to sit there serious and worry and sit there with anxiety.  You can enjoy, let your hair down because you know you’re putting the work in.  You put the work in every single day and you’re prepared.  Now, when you’re not prepared and you’re nervous, you sit there locked in, quiet.  No music in the locker room.  Let’s be locked in.  But, that’s not our team.  We have a bunch of guys who enjoy this game and play it in a way that brings us a lot of joy, the receiving corps especially.  They’re a fun group and they’re enjoying the ride, but they’re still locked in.  They’re making huge plays.”