49ers cruise past the Packers, stay atop the NFC
Advertisement 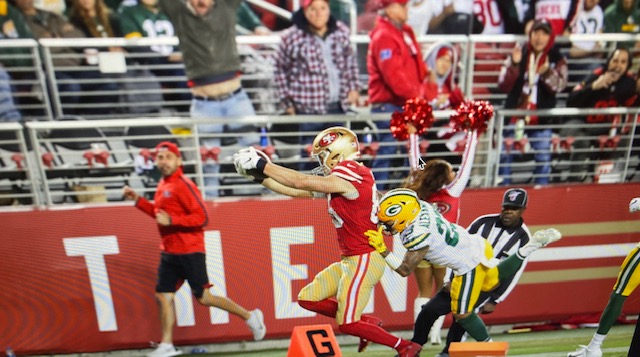 Santa Clara – The Forty-Niners surpassed one of their biggest hurdles with ease.  The anticipated matchup against the Green Bay Packers didn’t turn out to be as exciting as we thought.  In fact, the Packers went scoreless through the first half and held Aaron Rodgers to his lowest yards per attempt in his career as a starter.

The 49ers 37-8 victory over the Green Bay keeps them atop of the NFC with only one loss.  San Francisco’s top rated defense remains tough to handle.  Rodgers was sacked five times and went 10-for-20 for 41 yards in the first half alone.  On the Packer’s opening drive, Davante Adams was charged with a 15 yard penalty for unsportsmanlike conduct.  On the next play, Rodgers was sacked by Fred Warner and fumbled the ball.

“Oh, it was a big tone setter,” said DL DeForest Buckner.  “We came out guns blazing.  That’s the kind of energy you want us to start off with, especially with a team like that.  For the offense to capitalize off of it, it was just a great start to the game.”

Nick Bosa recovered the ball for 6 yards and that setup Tevin Coleman’s 2-yard touchdown.  Green Bay’s offense got completely shut down in the first half.  The Packers recorded five penalties for 50 yards which included Kevin King’s illegal use of hands (face mask).  That put the 49ers in good field position.  Jeff Wilson Jr. rushed up the middle for 25 yards, setting up Chase McLaughlin’s 29-yard field goal to extend San Francisco’s lead 10-0.

“We just played our game,” Richard Sherman said.  “We just played disciplined football.  Our D-Line, they hunted and in the secondary, we just tried to play tight coverage.  We played a lot of man-to-man.  [Defensive coordinator Robert] Saleh called a lot of man-to-man today and we felt like that was the plan to try and stop the run and stop [Green Bay Packers RB] Aaron Jones.”

By the second, the Green Bay continued to struggle while the 49ers picked up the pace.  Jimmy Garoppolo connected with his favorite Tight End, George Kittle (who returned after missing 2 games) for 18 and 22 yards.  That setup McLaughlin’s second field goal for 27 yards making it a 13-0 game.  At the two-minute warning, Garoppolo handed off the ball to Deebo Samuel who took flight for a 42-yard touchdown extending San Francisco’s lead 20-0.

“It was just an end breaking route,” said Samuel.  “When I see the ball, I take the ball.  When I turn the corner all I see is the end zone.  I was like, I got to get there.”

With seconds remaining on the clock, McLaughlin kicked a 48-yard field goal to make it a 23-0 game to end the half.  This game was a must win for the 49ers.  The team played great on all sides of the ball, leaving their performance tonight as one of the best of the season.  Their win keeps them in control of the NFC and home field advantage as we get closer to the playoffs.

“We hurt ourselves again,” Adams said.  “We just keep putting ourselves in these tough positions.  When it’s third-and- forever or second-and-forever, it’s tough to comeback against a good team like that.  We just have to put ourselves in a better position in early downs.

A poor performance by the packers left them dejected after their first turnover.  Rodgers never got into a good rhythm and after scoring in the third, they never got that opportunity again.  Due to a few San Francisco penalties, Green Bay saw a glimmer of light at the end of the tunnel in the third quarter.  Rodgers connected with Jamaal Williams for 33 and 9 yards, putting them in the best field position all night.  Rodgers scrambled for 5 yards and a penalty on Richard Sherman for unnecessary roughness put the Packers on the goal line.

“Oh my, we’ve been running that since Week One, and I have to run it like two or three times a week,” said Kittle regarding his 61-yard touchdown.  “That’s like a 50-yard route every single time.  I’m just like, ‘Hey [San Francisco 49ers head coach] Kyle [Shanahan], relax.  I’m a tight end.’ We finally got the call and ran it, so that was pretty fun.  It’s just a corner post.  Perfect coverage to run it against.  Jimmy gave me a perfect ball and I had to unhitch the trailer and out-run a couple guys.  It was pretty fun.”

“We’re very well aware of how tight of a race it is, but it’s way too early to sit there and focus on it,” said head coach Kyle Shanahan.  “The way things are going, I’m sure that’ll be the last week that really is worth knowing what’s out there.  There’s a lot of football to play and a lot of games and a lot of good teams out there.”