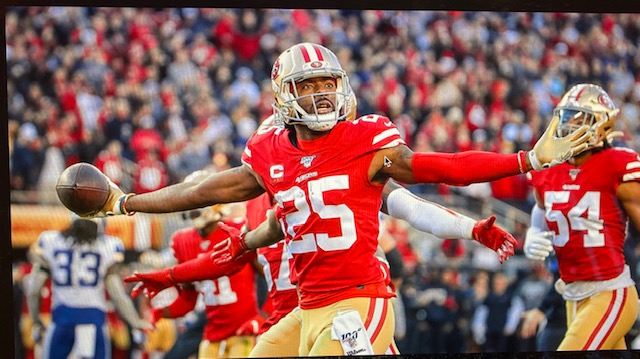 The road to the Super Bowl continues for the 49ers, the confidence of this team is unwavering.  Their first appearance in the playoffs since 2013 and the they did not disappoint.  Tevin Coleman recorded two touchdowns while Richard Sherman notched his first playoff interception with the team that led to a touchdown.

“First playoff game of my career, to get the win and keep playing to extend our season.  It was a crazy game and the atmosphere was wild, I’m excited to be apart of it,” said Arik Armstead.  “We were playing good the whole game, they got us early with a touchdown.  We just locked in.  We knew they wanted to do which was run the ball.  It starts with that, stopping the run.  We did a good job of that, I saw they had twenty something rushing yards.”

San Francisco’s 27-10 victory over the Minnesota Vikings advanced them to the NFC Championship game next Sunday.  One game away from the Super Bowl and this young team is ready.  On opening drive, Jimmy Garoppolo found Emmanuel Sanders for 22, 11 and 11 yards.  Then Garoppolo connected with George Kittle for another 11 yards, that setup Garoppolo’s 3-yard touchdown pass to Kendrick Bourne for a 7-0 lead.

On the next drive a pass interference call gave Minnesota an easy first down.  Kirk Cousins went deep to Stefon Diggs for a 41-yard touchdown to tie the game 7-7.  After that play, it became a defensive game leaving both teams with one touchdown each to start the second quarter.   A crucial error by the 49ers came in the second.

Deebo Samuel got tackled and fumbled the ball in the process.  After further review, the call was overturned when the replay showed his knee was down.  Garoppolo connected with Samuel for 18 yards, to setup Coleman’s 1 yard touchdown to extend their lead 14-7.  Coleman rushed for 102 yards with 22 attempts and two touchdowns for the day.

“We’re one game away from getting to the Super Bowl and two games away from being the Champs, the only thing on my mind is to keep stacking these wins” Sanders said.  “We were able to run the ball, we ran it 47 times and to be able to do that and be successful feels good.”

The Vikings unable to contain San Francisco’s offense, got lucky when Garoppolo’s pass intended for Samuel was intercepted by Eric Kendricks.  Minnesota struggled to get into the end zone, therefore settled for Dan Bailey’s 39-yard field goal to make it a 17-10 game to end the half.  Cousins was sacked a total of six times by the 49ers defense.

“We were beating ourselves,” said DT Jaleel Johnson.  “We just weren’t getting to the ball and once we got there, we had too many missed tackles.

His knee was down (regarding Samuel’s fumble), so if anything it gave us another opportunity.  We had some momentum after something like that.  When you’re on the road and it was so close to being a turnover, we needed to capitalize on that and suck the air out of the building.  We didn’t and they were able to convert and keep the ball going.”

By the third, the 49ers took over the game by forcing more turnovers for Minnesota.  Robbie Gould kicked a 35-yard field goal to extend their lead 17-10.  Cousins pass intended for Adam Thielen was intercepted by Richard Sherman.  There was a flag on the play for unnecessary roughness and that pushed San Francisco back 15 yards.  No worries, Coleman rushed into the end zone for a 2-yard touchdown making it a 24-10 game.

“It was completely my fault,” Thielen said.  “I didn’t cross his face and obviously Cousins trusted me to win on that route and make a play on the ball.  I didn’t do that.”

Another crucial error proved costly for the Vikings.  Mitch Wishnowsky punted 54 yards to the Vikings 20.  Marcus Sherels muffed the catch and Raheem Mostert recovered the ball to end the third quarter.  That was a huge break for the 49ers who dominated on both sides of the ball in the second half.  Gould kicked a 21-yard field goal to extend their lead 27-10.

“I think the emotion is probably the same for the fans as it is for the players,” 49ers head coach Kyle Shanahan said.  “When you get guys back (DL Dee Ford, LB Kwon Alexander, and S Jaquiski Tartt) who are really good players and made an impact all year, everyone is a lot more excited.  The more players you have out there, the better chance you have.  Starting with the rush with Dee Ford out there, just getting off the ball, whether he’s doing it or the other guys do it, the speed.  Having Kwon out there.  The times I’m looking up watching him, the way he flew around, made some plays on the screens.  Even when he flew and missed the guy on the screen, he makes the back have to come to a complete stop and cut back the other way, then our pass rushers can get there.  Tartt back there.  Tartt has been great for us when he’s been out there.  I knew it took him some time to get back with the injury that he had, but from what I saw, he played very well today.  I’m pumped to have him next week playing.

“The Bye Week helped the most.  None of those guys would have been available last week.  So, it was perfect to give them the week that they had, so their first game back was now.  I think they all got out of it, from what I know of, pretty clean and should be ready to go again next week.”

San Francisco improved to 5-1 against Minnesota in postseason play, with each game coming in the Divisional Round.  The 49ers also advanced to their 14th Conference Championship game since 1980.  The defense held the Vikings to 147 total net yards, which are the fewest allowed in a postseason game in franchise history.  The 21 rushing yards allowed by the 49ers defense is the fewest allowed in postseason game in franchise history.

“I mean, honestly on defense you just keep going next play,” said Sherman.  “I don’t know if it broke them or not.  Our team, we’ve got a good offense. [Head coach] Kyle [Shanahan] calls a heck of a game.  We just try to worry about things we can control on defense.  Going out there, getting another shot.  Honestly it was nice to get the touchdown, but we’re just ready for our next snap.”

“Yes, really exciting,” T Joe Staley said.  “Today was a big step.  We had a great plan coming in, we executed it really well.  I am excited to have the opportunity to play in the NFC Championship game.  I was excited coming into the locker room after the game, because the guys were excited that we won, but no one was really celebrating.  We realize how special this team is and what we can to do this year.  Guys are really excited and focused and we are moving on.”

The NFC Championship game will be held at Levi’s Stadium next Sunday, January 19th at 3:40 pm PST.