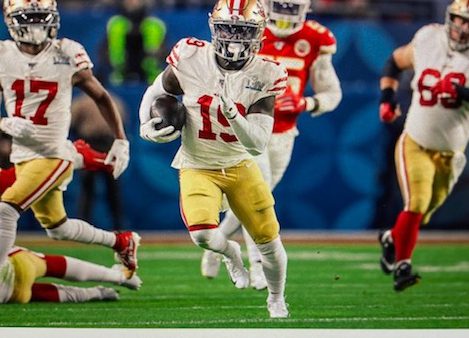 Miami – Three late touchdowns in the fourth quarter by the Kansas City Chiefs stunned the Forty-Niners in what was the best comeback victory in Super Bowl history.  The 49ers defense smothered the Chiefs offense in the third quarter, shut down in the fourth San Francisco appeared to have celebrated too soon.

Crucial mistakes this time proved costly as the 49ers suffered a tough 31-20 loss to Kansas City who are now the Super Bowl Champs for the first time in 50 years.  Patrick Mahomes was named the MVP after leading his team to victory.

“I just tried to fight, and obviously the third quarter didn’t go the way I wanted it to,” said Maohmes.  “I tried to force some things and had some turnovers.  I mean, that’s a really good defense, and so I didn’t play to my liking in that third quarter, but guys believed in me and gave me confidence.  We kept fighting and we found ways to win it in the end.”

San Francisco had a good lead to start the second half.  But the Chiefs are known for their epic comebacks late in the game.  With 6:30 left on the clock, a pass interference called on Tarvarius Moore came after Mahomes went deep to Travis Kelce on a 43 yards pass.

That setup Kelce’s 1-yard touchdown making it a 20-17 game.  Unable to score on the next drive, Kansas City scored their second touchdown, Mahomes connected with Damien Williams for a 5-yard touchdown, that play gave the Chiefs their first lead of the night.  At the two-minute warning the 49ers had a chance to turn things around, but three incomplete passes followed with a sack on Jimmy Garoppolo on 4th down.

Kansas City got the ball back, Williams rushed for 4 yards before Kyle Shanahan took a timeout.  Williams then rushed for a 38-yard touchdown to secure the Chiefs win.  San Francisco’s offense and defense collapsed in the fourth quarter leaving the team dejected as Kansas City began to celebrate.

“I think the turning point was when we got a turnover and then we didn’t execute on offense and they got the ball right back and drove 87 yards or however how far it was,” TE George Kittle said.  “As an offense, we have to end the game right there, and we didn’t.”

Garoppolo threw his second interception to end the game.  The 49ers registered two interceptions on the night, with Fred Warner and Moore each but against a dominant Chiefs defense it just wasn’t enough.  San Francisco finished the 2019 postseason with 5 interceptions, which is tied for the 4th most in a single postseason in franchise history.

The 49ers seemed to have everything under control until the six-minute mark in the fourth quarter.  Both teams scored and kicked a field goal to end the half tied at 10-10.  After Samuel rushed for 32 yards, Robbie Gould kicked a 38-yard field goal for a quick 3-0 lead.

Mahomes scrambled for 2 yards in the red zone, then rushed in for a 1-yard touchdown making it a 7-3 game. By the second, Garoppolo’s pass intended for Samuel was intercepted by Bashaud Breeland.  That setup Harrison Butker’s 31-yard field goal to extend the Chiefs lead to 10-3.

Garoppolo then connected with Samuel for 16 yards before San Francisco went to the running game, Raheem Mostert rushed for 11 yards and Tevin Coleman rushed for 17 yards.  Garoppolo found a wide-open Kyle Juszczyk who rushed into the end zone for 15-yard touchdown to tie the game 10-10.

To start the third Gould kicked a 42-yard field goal giving the 49ers a 13-10 lead.  After Mahomes pass was blocked by Nick Bosa, who almost forced a fumble, Mahomes went deep to Tyreek Hill but his pass was intercepted by Warner.  That setup Mostert’s 1-yard touchdown extending their lead 20-10.  San Francisco did not score again after that play.

“It definitely hurts, FB Juszczyk said.  “At the end of the day, that’s exactly the position we wanted to be in.  So, I think that makes it hurt a little bit more, but you couldn’t have asked to be in a better situation.”

Before the game, there was an emotional tribute to Kobe Bryant and those who lost their lives in the helicopter crash last Sunday.  Both NFL teams lined up on the 24 yard line to honor all nine victims killed in that crash that included NBA great Kobe Bryant and his daughter Gianna Bryant.  The NFL also honored their own, Hall of Famer Chris Dolan who lost his battle with Cancer. 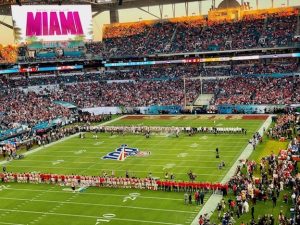 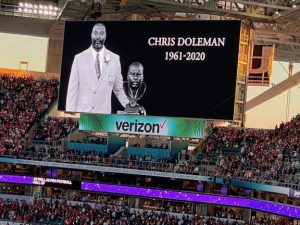 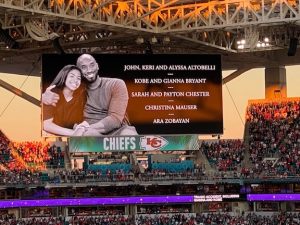 The NFL then honored 100 years in football with the greatest quarterbacks to ever play the game along with defense, offense, coaches, dynasty teams and those who you might not remember but made an impact as well. 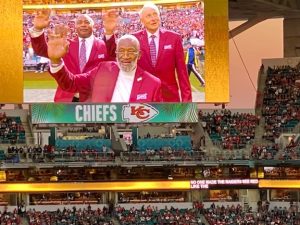 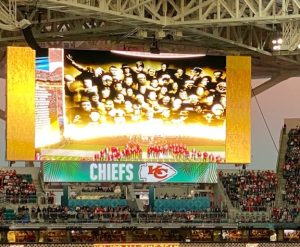 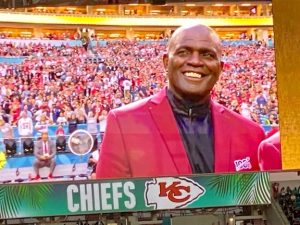