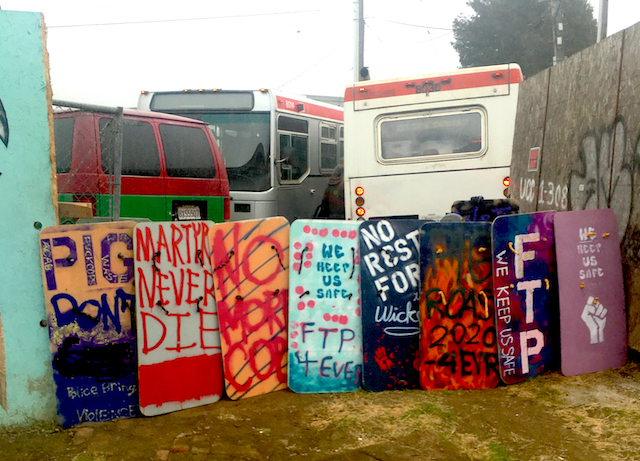 Activists hold shields and stand crouched behind them on Friday, November 13th on a tract of land just west of Wood Street in West Oakland. The shields created a barrier to delay the eviction of unhoused people living in buses. Photo by Zack Haber.

Both sides agreed to each other’s terms after a year-long standoff that involved a court battle, law enforcement actions, several protests and civil disobedience.

Over the last year, the United Front Against Displacement (UFAD), a grassroots group that organizes to prevent displacement, supported the residents during the standoff by organizing several protests and defensive actions.

“We would have been mowed over if it wasn’t for the UFAD…and all the neighbors that came out of their houses to stand by us,” said Mavin Carter-Griffin, a resident in her mid-50s who, starting over seven years ago, lived in trailers and self-built structures that sat partially on the tract of land and partially on the bordering Wood Street. She agreed to move all of her belongings off the tract and onto Wood Street on Monday in exchange for a 40-foot metal storage facility and assurance that the move would be done in a way that would not cause her to lose possessions she wished to keep.

At the time, the dust-covered tract with dried grass and wild flowering fennel was densely packed with unhoused residents who lived in vehicles, tents, or self-made structures. The declared plan was for GameChanger to lease their land for $1 a year to the City of Oakland which would then work with a nonprofit to create a Safe RV parking site where residents who lived in RVs could soon come back and live.

An 18-month-long lease was written up, but not signed, as the City first wanted the land cleared. During the operation, Oakland Police Dept. officers also encouraged people living in tents and self-made homes to clear the area, although no formal eviction was declared.

Some residents resisted the move as they did not want to live in a Safe RV Parking site, were skeptical that they would be allowed to return, and/or felt that moving would put them in a less safe position. The UFAD and their supporters worked with the residents by organizing a protest during the operation to support them in their resistance.

Protestors chanted “shame” and “quit your jobs” as OPD officers walked throughout the tract. While the vast majority of residents left the tract during the operation, a small group of unhoused residents remained on the tract, resisting OPD officers who encouraged them to move.

One resident who resisted the eviction and asked only to be identified as Puffy, recalls dogs being involved as well.

“A bunch of people showed up with a bunch of people from the camp,” said Puffy. “And the dogs started barking and these big burly cops didn’t want to [mess] with the people or the dogs. So they left.”

California Secretary of State records show that Fred Craves owns GameChanger LLC and bought the tract in 2016. He also owns Bay City Capital, a life science investment firm that, according to its website, has raised over $1.6 billion.

Craves has not responded to requests to comment on this story but his lawyer, Pat Smith of Smith LLP said by allowing his land to be used for a Safe RV Parking site she thinks “the owner feels he’s being able to do something positive for city and the homeless.”

Smith has stated that GameChangers will develop the land within two to three years and hopes that in the interim time “hopefully the homelessness problem will start to be addressed more successfully but the city.”

In the weeks that followed last November’s clearance, GameChanger installed a fence around their land and hired a security guard, but most of the few remaining residents still did not leave. The City refused to sign a lease with GameChanger until the lot was cleared. Then GameChanger escalated their tactics to remove unhoused residents.

Smith said they sued remaining residents in December 2019, and in September 2020 GameChanger was able to get a forceable detainer trial, which they won, requiring the Alameda County Sheriff to evict residents still on the tract within a 180-day period that started on Oct 13.

The UFAD still wished to defend those living on the land, partially because they were concerned about how the Safe RV Parking site and eventual development on the land would affect those in surrounding areas of a larger sprawling community of unhoused people that live on Wood Street and nearby CalTrans land.

Kelly Thompson, an elderly resident who lives near the GameChanger tract on CalTrans land left a similar City-sanctioned site after being robbed at gunpoint there earlier this year.

Not knowing when the eviction would occur, UFAD put out a call for people to show up early on October 13 to defend the tract. About 70 people came and sheriff’s deputies did not execute the eviction on that day.

The group and concerned local housed residents then organized an occupation during working hours on weekdays, where a few people took turns keeping an eye out for sheriff’s deputies approaching the tract.

On the afternoon of October 29, sheriff’s deputies came to execute the eviction, and supporters on site made a call for additional people to protest, which inspired about 60 total people to show up. Sheriff’s deputies were able to take residents who where on-site out of the tract but protestors stood at the exit of the gate and locked arms in a standoff with police and chanted “Who protects us? We protect us,” and “The people, united, will never be defeated.”

There were large holes in GameChanger’s fence and residents came back to the tract later in the night, violating trespassing law.

“Our role was to have unauthorized dwellers leave the property and we turned it over to GameChanger LLC and their reps,” wrote Alameda County Public Sheriff’s Deputy Sgt. Ray Kelly in an e-mail written on Monday. “It is their job to secure lock and clean the location. We are not involved with any fencing or site security.”

To follow California law, GameChanger then had to wait 15 days before removing property from the site. On November 6, exactly a year after the initial 2019 protest, Puffy, who had lived on the tract in a tent and self-made structures for about eight years, moved to land about a quarter mile north under the I-880 Highway, but only after being given an RV.

“The issue with this property, to me it’s between this billionaire, and us. If he’s got a beef let him come and say it,” said unhoused resident Cam McKeel on Sunday while remaining on Gamechanger’s tract.

McKeel, along with four other residents, established a residency on the tract in 2017 and lived in buses situated behind self-built barricading wooded walls that stood about 10 feet tall and a locking gate. A black and red sign attached to the gate read “KEEP OUT.”

Oakland Police Department officers showed up on November 13, and also came on Monday. They were within their legal rights to arrest McNeel and the other people living in buses for trespassing. But no arrests were made.

On both days, activists bearing colorful shields formed a shield wall by holding and slightly overlapping them with each other at the gate entrance while an additional row of supporters stood behind them to support their bodies.

Since sheriff’s deputies had broken the lock on the gate while executing the eviction, the spot, if undefended, could have been an easy entrance. But OPD officers faced the shield wall and did not enter. OPD media has not responded to requests to comment on this story.

“It’s just a piece of plywood” said an activist who participated in the shield wall and asked not to be named out of fear of police retaliation. “But it proved to be very effective. The fact that there is a human body behind them and they’d have to drive through that made it something that was a little bit too bold for officers to want to tear down in the same way they would homeless people’s shelters.”

McNeel, other residents who live in buses, and some activists who participated said shielding off the area forced GameChanger to negotiate.

McNeel and other residents came to an agreement on Monday afternoon with GameChanger to leave the tract after being paid over $2,200 each. About a week prior, they said they were offered a flat fee of $1000 total. The residents said they planned to move onto nearby CalTrans land. They were the last residents to leave, and GameChanger finally achieved its goals of clearing the tract.

While the vast majority of residents living on GameChangers tract of land left during the initial City run clearance in November of 2019, Mavin Carter-Griffin, Puffy,

Cam McNeel and others who lived with him in buses all chose to stay and resist the initial clearance operation. They were all able to stay on the tract for an additional year and receive material or cash concessions when they did leave.

UFAD members said they see the prolonged struggle as a win but are now focused on helping other nearby residents in the area resist further displacement.

City of Oakland spokesperson Karen Boyd wrote in an e-mail on Tuesday that since the land was now cleared, the City signed a lease with GameChanger and is moving forward with the Safe RV Parking site that will open in early 2021.

Recently passed City legislation called The Encampment Management Policy states that encampments that sit within 25 feet of a Safe RV Parking site can be subject to closure.

“The GameChanger battle was the first battle in a series,” said Dayton Andrews. “They’re going to escalate after it’s cleared.”