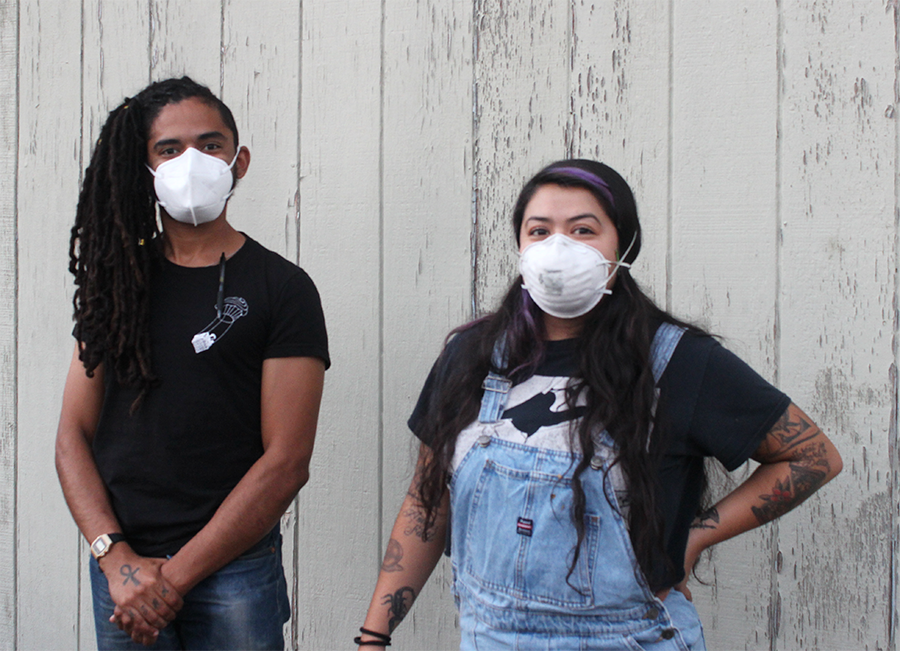 Dayton Andrews (right) and Jazmine Lopez (left) of The United Front Against Displacement on September 14. The grassroots housing justice organization gave out 800 masks last weekend that Mask Oakland provided them with. Photo by Zack Haber.

Last weekend, as smoke continued to blow into Oakland from wildfires throughout California and Oregon, Mask Oakland, a queer- and trans-led community relief project that has responded to smoke crises in the Bay Area since 2017, collaborated with seven grassroots groups to distribute more than 11,000 K95 and N95 masks, mostly to people experiencing homelessness in Oakland.

The United Front Against Displacement (UFAD), a housing justice organization, and SMC Tenants Council, a tenants union, distributed around 1,200 of those masks.

“I definitely feel a sense of urgency when I see folks and know that they’re out there for an unlimited amount of time,” said Jazmine Lopez, who works with UFAD. “It’s heartbreaking because I want to do more.”

UFAD started their work on Sept. 11 when a small group of volunteers distributed masks at 37MLK, a small unhoused community at 37th Street and Martin Luther King Jr. Boulevard where mostly elders live. Then the group distributed masks to people living under several highway underpasses along MLK Boulevard and Telegraph Avenue. They ended the day’s work by distributing masks along and just west of Wood Street and between 18th and 26th streets in West Oakland.

On Saturday, about 20 people working with UFAD distributed masks again in the Wood Street area. The Saturday distribution was part of the organization’s weekly workdays, which alternate between Saturdays and Sundays each week.

In the past, they’ve built hand-washing stations, freshwater storage facilities, a shower, and done basic cleanup work on their workdays. In total, the group handed out about 800 masks.

“We support groups led by and in direct solidarity with unhoused people,” said Quinn Jasmine Redwoods of Mask Oakland. “The UFAD is great at that, and we’ve given them hundreds of masks several times this year.”

Mask Oakland also gave masks to SMC Tenants Council, who handed them out on Sunday. The tenants union gave out most of their 400 masks along the Wood street area and worked with a crew of about 20 people.

“The reason that we were out there is the same reason why we’re organizing as tenants,” said Emily Stone of SMC Tenants Council. “Our leaders aren’t doing nearly enough to solve our problems and meet our very basic needs.”

Stone said SMC Tenants Council is fighting for more protections for tenants that are not yet available, like rent cancelation during the COVID-19 pandemic and added that “our unhoused neighbors are dealing with lack of action from [our local leaders] more severely.”

Stone pointed out that resources are available to shelter people in hotel rooms through emergency powers available to California Gov. Gavin Newsom, the Alameda Councty Board of Supervisors and Oakland Mayor Libby Schaaf due to the declared state of emergency under COVID-19, but that hotel rooms still sit empty while people live on the street and are forced to inhale wildfire smoke.

While the state and Alameda County have set aside about 1,000 hotel rooms for unhoused people through Project Roomkey, their own current data shows about 25% of those rooms currently sit empty.

The City and the County have handed out masks to unhoused people, but far fewer than grassroots groups with no government funding.

Public Information Officer L. Autumn King said that the city has worked with the county and “provided over 6,500 masks within the last month.” Redwoods said Mask Oakland has handed our over 30,000 in the last month and is set to hand out about 54,000 after this upcoming weekend.

A Wood Street resident on Sunday who asked not to be named claimed all the masks he has received were from grassroots groups.

“Grassroots groups actually show up, whereas the city has not shown up,” he said.