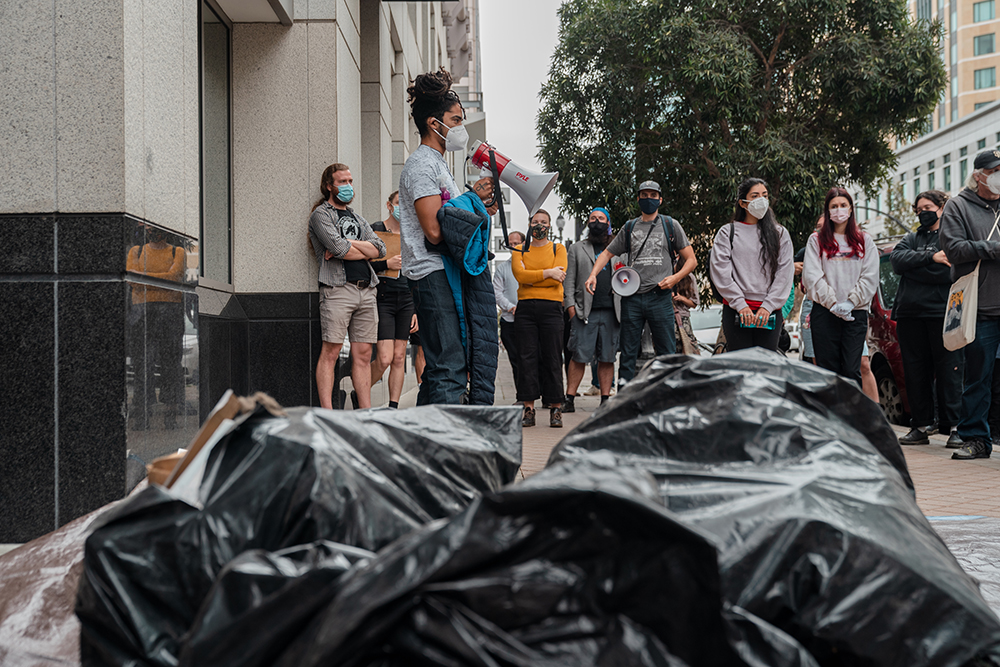 Dayton Andrews gives a speech next to trash bags that protestors dumped outside of Oakland’s Department of Public Works building during a rally against a proposed new homelessness management policy. The dumping called attention to city inaction against businesses and housed residents dumping waste in communities where unhoused people live. Photo by Jungho Kim on Oct. 10, 2020.

Over 50 people attended a rally against new proposed legislation, called the Encampment Management Policy, outside of Oakland’s City Hall on Oct. 10 from 1:00 p.m. to around 4:00 p.m.

The rally started with speeches in the amphitheater in front of City Hall. Dayton Andrews of The United Front Against Displacement, the group who hosted the rally, spoke first.

“This Encampment Management Policy creates no pathways into housing,” he said. “it merely expands…police authority to [mess] with homeless people.”

Protestors included members of the United Front Against Displacement from the Bay Area, Boston and New York, members of local housing justice groups Bay Area TANC and The Village as well as unhoused Bay Area residents including those who live in the 37MLK community.

Andrews and other speakers stood in front of a boarded up City Hall entrance upon which an unknown source graffitied “OHLONE LAND” and “BLACK LIVES MATTER” last summer and behind two banners trapped across the amphitheater stairs which read “SERVE THE PEOPLE NOT THE RICH” and “THE UNITED FRONT AGAINST DISPLACEMENT” in large black and red letters.

In his speech, Andrews claimed the EMP “codifies and normalizes” the city’s recent and current practice of clearing people who experience homelessness out of an area while offering them no other safe place to live.

On March 27, the City Council unanimously passed a resolution requesting that the City Administration follow CDC guidelines during the COVID-19 pandemic and “only clear homeless encampments if individual housing units or alternative shelter is provided,” but the language used, as a request, has not required the city to do or not do anything.

Although the pace of clearances has slowed during the pandemic, they have still been happening. On Sept. 23, the City demolished structures that had sheltered 20 to 30 homeless people living under the BART rail on 85th Avenue and San Leandro Street in East Oakland and offered them no alternative shelter.

The new Encampment Management Policy, which City Administration formulated, does not provide new services to people experiencing homelessness in Oakland but defines areas that encompass most of Oakland as “high sensitive areas,” then states those areas will be subject to closure.

High sensitivity areas include those within 150 feet of schools, 50 feet or residences, businesses, parks, playgrounds, or sports courts. The City Administration plans to present the EMP to City Council on October 20 where council can approve, outright reject, or engage in a process of changing the policy.

Speakers at the rally did not address reforming the new policy, but some spoke broadly of what they felt all Oakland residents deserve in terms of housing.

“We want decent housing fit for the shelter of human beings,” said activist former Black Panther Frances Moore, widely known as Aunti Frances. She then suggested land and housing should be bought using government aid to be cooperatively owned by Black and oppressed communities who are experiencing homelessness.

Romalita, a resident of the homeless community 37MLK, spoke of how her homelessness is making it impossible for her to get needed surgery. She was critical of those in political positions of power at all levels and emphasized unity amongst activists.

“There’s no one up there who I like, or who’s doing anything for us,” she said. “If we can just stand hand-in-hand together, we can be the power. We are the power.”

After the speeches, protestors marched around City Hall and to the Dept. of Public Works Building, where they laid down a tarp and dumped bags full of trash, a tire, and a couch cushion gathered from a large homeless community in West Oakland.

Before the dumping, Andrews spoke of how homeless people get blamed for trashing areas but are not given consistent trash services by the City and that the places they live become dumping grounds for business and housed residents.

As they dumped trash, protestors chanted “All power to the people.” They picked up the trash before leaving the site.