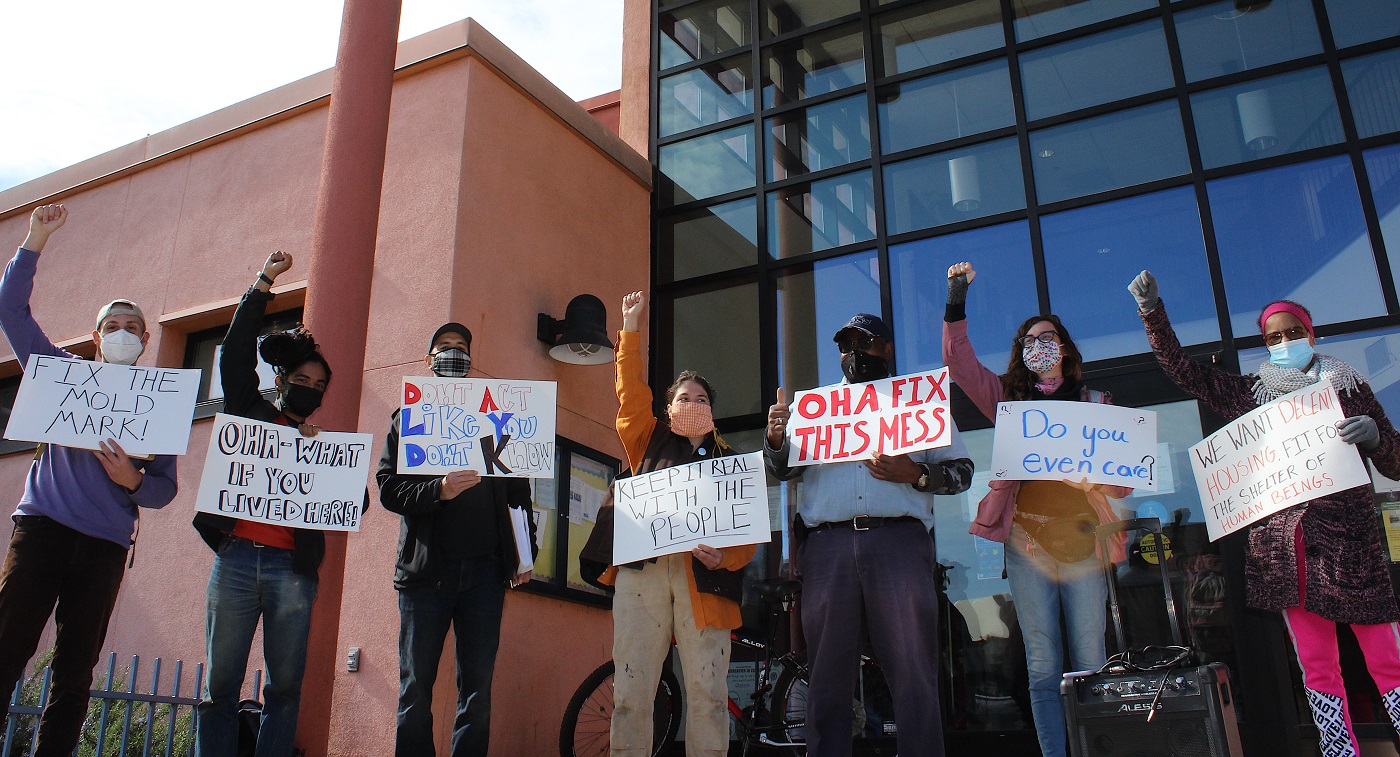 Members of The United Front Against Displacement and Peralta Village tenants hold signs at a protest outside of The Oakland Housing Authority's West Oakland offices on Saturday February 13. (Left to right) Jacob Fowler, Dayton Andrews, Cole McLean, Colleen Donovon, Eddie Simmon, Cassidy Taylor, and a Peralta Village tennant to asked not to be named

Peralta Village tenants and supporters gathered outside of Oakland Housing Authority’s [OHA] offices from noon to 1:00 p.m. on February 13 to protest what they see as insufficient maintenance and unfair threats of eviction despite Alameda County’s and Oakland’s COVID-19 related eviction moratoriums.

Peralta Village is a public housing project in West Oakland consisting of 390 units and over 700 residents. It was founded just after World War II as segregated, all-Black housing. Today, many of the residents, almost all of whom are still Black, feel they are being treated unfairly. Some are coming together to demand change.

“I would like for the tenants to come together more and not fear retaliation,” said Eddie Simmon, who has lived in Peralta Village for over 20 years, at the protest. “The more the tenants vent their frustrations as a group, the better [OHA] will respond.”

A February 1 article from this publication showed tenants who complained of black mold, overflowing trash, inconsistent clean up, an inoperable overhead light despite services requests dating back a year, a six-week delay to repair a window that would not shut, a lack of recycling services, and eviction threats despite the moratorium. In reaction to these circumstances, 85 Peralta Village tenants signed and delivered a petition to OHA demanding better treatment.

Shortly after the article’s publication and residents delivered their petition, about a dozen tenants received a notice from Oakland Rent Adjustment Program informing them that eviction notices OHA had sent “may have been served in error and/or in contradiction to the current laws in place prohibiting most forms of eviction in Oakland.”

The notice also broadly outlined rights tenants have under Oakland’s eviction moratorium. Under a section marked “What should you do if you’ve received an eviction notice?,” the notice reads “You are likely not required to move at this time.”

“If you didn’t have knowledge of what the [eviction notices] represent, you think it’s a serious threat but, in reality, it’s just intimidation,” said Dayton Andrews at the protest. Andrews is a member of The United Front Against Displacement, an anti-gentrification group that has been organizing with Peralta Village tenants for better treatment from OHA.

An OHA spokesperson, Greer McVay, said that OHA has not threatened to evict any residents during the COVID-19 emergency for non-payment of rent. But some residents report they have received three-day notice or quit notices from OHA, not due to rent non-payment, but due to OHA accusing them of breaking its rules.

Oakland’s Rent Adjustment Board classifies such notices as eviction notices. Still, no residents have claimed that OHA has followed through on such evictions and, when interviewed for the February 1 article, McVay claimed OHA is not currently evicting any residents.

In an interview with The Oakland Post, an OHA worker who asked not to be named due to fear of retaliation said that through discussions with OHA’s upper management and personal experience on the job, the recent eviction notices were delivered as a “bully tactic.” The worker also was sympathetic to resident complaints about rodents, inconsistent trash pick-up, and slow repairs.

“[For] every resident I’ve been in contact with,” the worker said, “it’s the same story. As an insider, there’s no reason why they should live in those types of conditions. It’s so baffling for us.”

Residents claim trash still regularly overflows from Peralta Village dumpsters and onto the streets, sometimes blowing near their homes. OHA’s McVay, said the agency has increased its trash clean-up services under COVID-19 but blames much of the mess on illegal dumping that she claims comes from outside of Peralta Village.

In response to residents’ complaints about mold, McVay said OHA “actively works with residents to resolve [mold] issues if noted during a unit inspection” or if tenants report such a problem, and that OHA’s “primary goal is to educate residents on mildew and mold prevention.”

McVay said OHA is prioritizing emergency repairs under COVID-19, which are addressed within “four to 24 hours depending on the severity” and that “non-emergencies are based on the availability of the maintenance crew.”

Residents claim that even during emergencies their requests for maintenance often get delayed for weeks or months and that favoritism, not COVID-19, causes delays.

“They’ll look at the list [of maintenance requests] and they’ll choose which apartment they want to go to,” said an OHA tenant at the protest who asked not to be named due to fear of retaliation. “It’s not in the order of the call. That’s what I hate!” This resident claimed they had to wait six weeks for OHA to fix a window in her unit that would not close.

Mark Schiferl, director of Property Management for OHA, has recently called and e-mailed both The United Front Against Displacement and some residents mentioned in the February 1 article to ask about problems residents complained about.

Simmon was pleased that Schiferl reached out. “It felt like we got somebody’s attention finally,” said Simmon, “because this guy is calling me and I’m just another tenant.”

Residents and their supporters are hoping that by protesting and organizing, OHA will respond to repair requests in a more effective quicker manner, stop eviction threats, and keep the neighborhood cleaner. To get OHA’s attention they posted signs on OHA’s office doors during the February 13 protest. One read “FIX THE MOLD MARK!” and another read “OHA FIX THIS MESS!”

Although 10 people showed up to the protest, the demands the protestors made have much broader support as 91 Peralta Village residents, about 12% its total population, have now signed the petition demanding better treatment from OHA. OHA tenants and supporters are hoping more people show up to support their demands at future actions.

“It’s going to take a bunch of us coming together to get anything done,” said Simmon.

“We’re out here to prove to folks that the sky’s not going to fall if you take a stand,” said Andrews at the protest. “And things are only going to get worse if you don’t.”

The United Front Against Displacement is encouraging residents to call them at 510-815-9978 or email them at wewontgo@riseup.net if they want to sign the petition and/or get involved in future actions.