Oakland – The Raiders continue their winning ways at the helm of a few rookies.  Maxx Crosby recorded a career-high four sacks on Ryan Finely and Travyon Mullen recorded his first NFL interception.  Another great effort from the rookies in handing the Cincinnati Bengals their tenth loss of the season.

The Raiders 17-10 victory over the Bengals put them in first (6-4) place tied with the Kansas City Chiefs in the AFC West.  With 1:54 left on the clock in the fourth quarter, Cincinnati got the ball.  Finley went deep with a pass intended for Alex Erikson but Mullen was there with great coverage and intercepted the ball to secure Oakland’s third consecutive win.

“I’ll be honest, we had a good first round draft choice that nobody has really even met yet,” said Jon Gruden.  “I think he could be a difference maker.  The poise and the production and the professionalism that they play with and come to work with is something everybody would be impressed with.”

It was an interesting start for the Raiders, unable to score on Opening drive and in the first quarter, the Bengals took advantage off an Oakland turnover early.  On Cincinnati’s first series Finely was sacked by Crosby who forced him to fumble.  Crosby recovered, putting the Raiders in good field position but Josh Jacobs fumbled and Nick Vigil recovered for the Bengals.

Crosby recorded his first career multi-sack game with 4.0 sacks, tied for the second-most sacks in NFL history by a rookie in a single game and the most by a rookie in franchise history.  Crosby is one of six players in the NFL with at least three sacks (6.5), three forced fumbles (three) and three passes defense (three) in 2019.

He ranks first in franchise history with 6.5 sacks through a players’s first 10 career games.  Josh Jacobs continues to lead all rushers in the first half with 74 yards on 12 carries.  He recorded his fourth career 100-yard rushing game, surpassing Marcus Allen’s franchise record for the most 100-yard contests by a rookie.

“I had a good game, but it was a collective unit coming together,” Crosby said.  “We rushed well all day.  I feel like we started it with [Los Angeles], and we just kept getting better.”

We just bought in,” said Jacobs on the rookie class.  “Like I said when we came in, the rookie class came in together and we came to an agreement that we were going to do things the right way and build this program.  We wanted to try and shape it back to the Raider culture and back to what we feel like dominating football is.  Just to see how we are all coming in and trying to keep that promise and execute every week has been huge.”

By the third quarter, the Raiders defense continued to dominate Cincinnati and shut down their offense.  Finley struggled and they scored once when Randy Bullock kicked a 40-yard field goal to cut the lead down to four.  It seemed like a hopeful situation but the Bengals never scored again.

To make matters worse, Cincinnati lost their top receiver Auden Tate.  Tate made a 20-yard catch on third down, he was sprawled out on the field for a few seconds before team doctors ran out forcing him to stay still.  Tate suffered a neck injury and was carted off the field and taken to a nearby hospital.

Oakland didn’t do too much on offense in the second half.  Daniel Carlson kicked a 20-yard field goal making it a 17-10 game and that was all the Raiders needed for the win.  Carr passed for 292 yards and a touchdown, Jacobs had his fourth 100-yard game in the last six weeks.

The wins snaps Oakland’s three-game losing streak to the Bengals dating back to 2009. The Raiders continue to dominate as the home team throughout the series, improving to 13-2 in both Oakland and Los Angeles.  They also lead the NFL with 10 sacks among rookie defenders and are the only team to have at least two rookies with at least three sacks apiece.

“I’m really proud of our team,” Gruden said.  “I compliment the Bengals.  They fought their heart out.  It was great for all of football.  If you’re a young football player, there are no standings.  There are no stats. There are no records.  The ball is snapped, you play hard and anything can happen and that was one of those games today.  Maxx Crosby [had] four sacks.  D.J. Swearinger was here for two days, and he leads our team in tackles.  Trayvon Mullen, another rookie, had a key interception.” 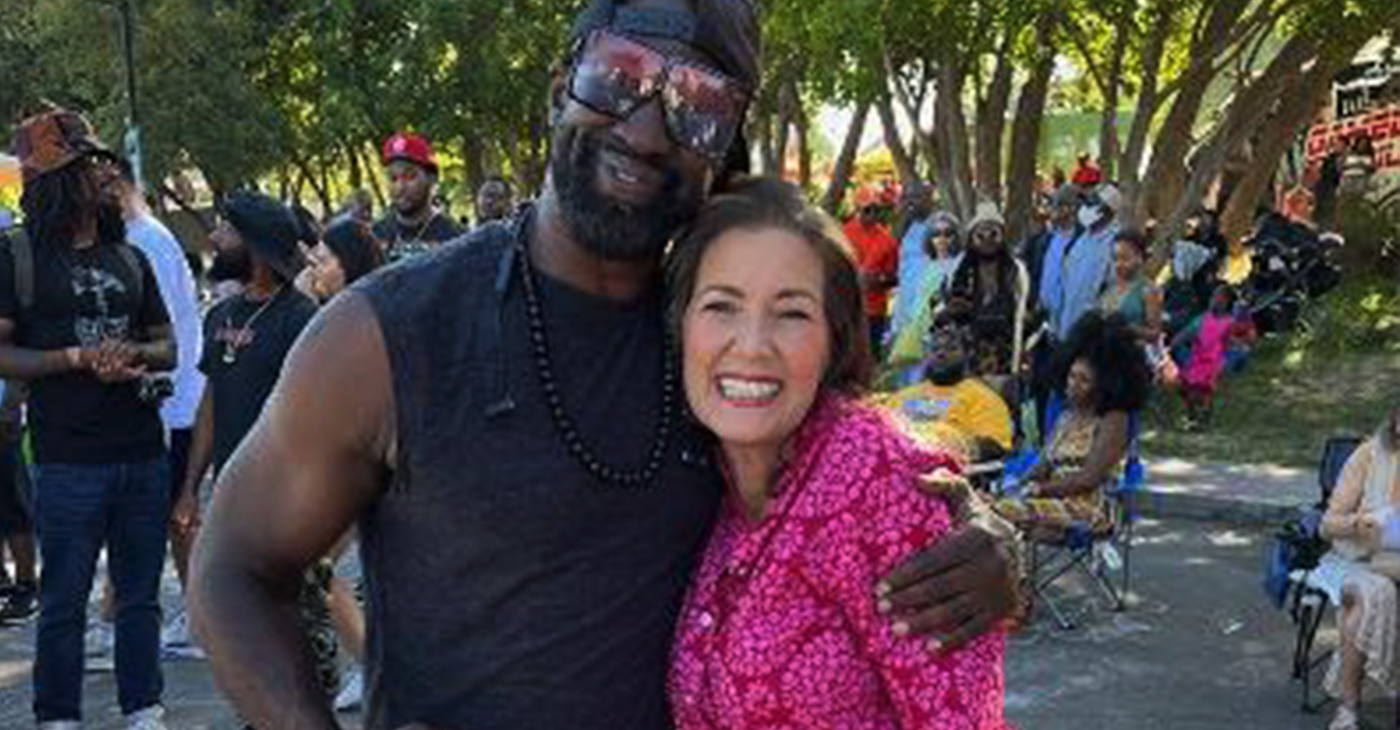 As Schaaf exited the stage after making remarks at an event touting Oakland culture through music, dance, fashion, food and more, she greeted Jones by demonstrating his highly acclaimed “breathing aerobics” technique.

With over 30 years of experience in the health and fitness field, Jones is a member of the African American Sports & Entertainment Group and creator of Breathing Aerobics, a health and wellness company that specializes in teaching specific breathing exercises to improve overall health. He has taught Breathing Aerobics on major television and radio stations, which has earned him the moniker, “Guru of Breathing.”

For more info on Breathing Aerobics go to www.breathingaerobics.com

In a KQED interview, Mayor Libby Schaaf supported the proposed closing of 15 schools as an “opportunity” and even went father. “This is not just some painful but necessary budget cut,” she said. “I really feel for parents, students, teachers. We have been through so much trauma, and they have every right to feel distrustful and fearful about this decision. But I believe that it is different this time.

The Office of Oakland Mayor Libby Schaaf has demanded a retraction from Oakland Post, saying the newspaper was incorrect to characterize Schaaf as a supporter of permanently closing up to half of the public schools in Oakland.

“She’s never held that position,” said Justin Berton, the mayor’s spokesperson, in an email to the Post.  “As you know, knowingly publishing false information is not only unethical, it’s potentially actionable,” he wrote.

Berton was responding to a sentence in an article in last week’s Post that said, “Schaaf, a longtime supporter of charter schools, has spoken forcefully in the media in favor of closing as many as half of the city’s public schools.”

The Post’s comments on the mayor’s position was based on a Feb. 4, 2022, interview with KQED. At the time, the school district had just announced that it was closing 15 schools this year and next and was planning to close more in future years.

In the KQED interview, Schaaf supported the proposed closing of 15 schools as an “opportunity” and even went farther.

“This is not just some painful but necessary budget cut,” she said. “I really feel for parents, students, teachers. We have been through so much trauma, and they have every right to feel distrustful and fearful about this decision. But I believe that it is different this time.

“When you look at districts like Stockton, Fremont, San Jose, they serve roughly the same number of students, about (33,000). But they do it in almost half the campuses, between 41 and 48 campuses in those three districts, whereas Oakland has EIGHTY CAMPUSES (Schaaf’s emphasis).

“This is an opportunity to do better for our students, our educators, our families, and I trust this leader to deliver on that promise in a way that has never happened before.”

“We’re here to commit to the residents of Oakland that they must have a right to vote on whether to spend over a billion public dollars (on the proposal) for the Oakland A’s to build a stadium and real estate development at Howard Terminal,” said City Council member Noel Gallo, speaking at the media event Wednesday morning. 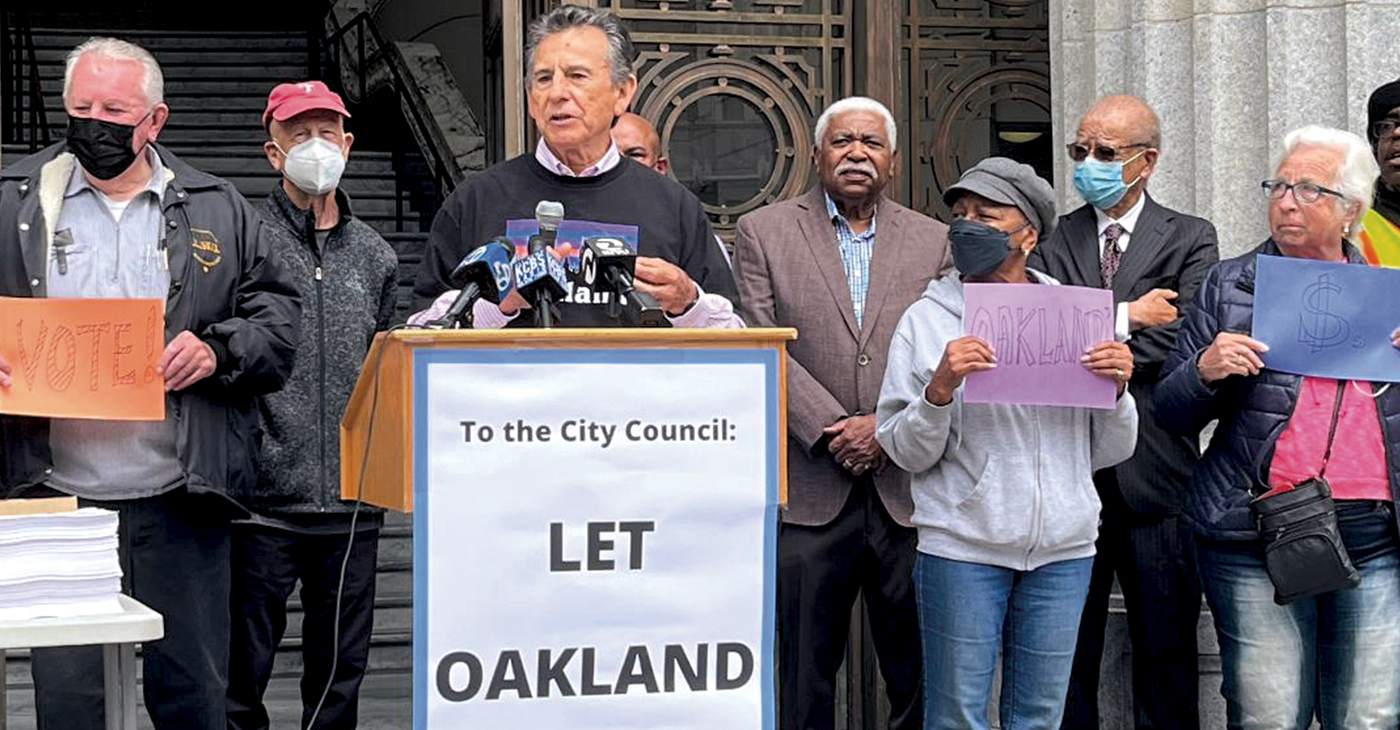 Oakland community leaders and activists, port workers and environmental advocates joined City Councilmember Noel Gallo on the steps of City Hall this week to urge the City Council to allow the public to vote on the use of public funds for the A’s stadium and private real estate development at Howard Terminal.

“We’re here to commit to the residents of Oakland that they must have a right to vote on whether to spend over a billion public dollars (on the proposal) for the Oakland A’s to build a stadium and real estate development at Howard Terminal,” said Gallo, speaking at the media event Wednesday morning.

“This is an unprecedented grab of public funds,” which could grow considerably because there seems to be no limit on the city’s liability for potential cost overruns, Gallo said.

“We have to learn from our past experiences (with the Raiders) to not make the same mistake again,” he said.

The rally comes in anticipation of a July 5 City Council meeting that will consider a resolution to put an advisory vote on the November ballot on the use of public funds to support a privately owned stadium and real estate development at Howard Terminal at the Port of Oakland.

At the Tuesday, July 5 meeting, the Council will discuss the measure and may ultimately take a final vote on placing it on the ballot. Public comment for this item will be taken at the beginning of the meeting.

In recent weeks, more than 4,000 Oakland residents have signed a petition in support of putting the measure on the November ballot.

Other speakers at the City Hall media event included James Vann, an advocate for affordable and homeless services.

“This is the people’s money, and the people should get to decide,” said Vann.

Civil rights attorney and activist Walter Riley said that Oakland A’s owner John Fisher is acting like a “corporate raider” who takes money out of the A’s instead of investing in his team.

Instead of giving a billion dollars to Fisher’s private development, the city should be investing in building and maintaining public parks and other infrastructure needs, he said.

Naomi Schiff, a housing activist, said, “The Howard Terminal deal keeps getting more expensive” for taxpayers. adding that the stadium at Howard Terminal would be built on a “inundation zone and liquification zone.” 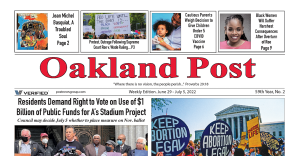 Cautious Parents Weigh Decision to Give Children Under 5 COVID Vaccine

OPINION: Black Women Will Suffer Harshest Consequences After the Overturn of Roe

COMMENTARY: Will Cassidy Hutchinson Shame Republicans to Tell the Truth?