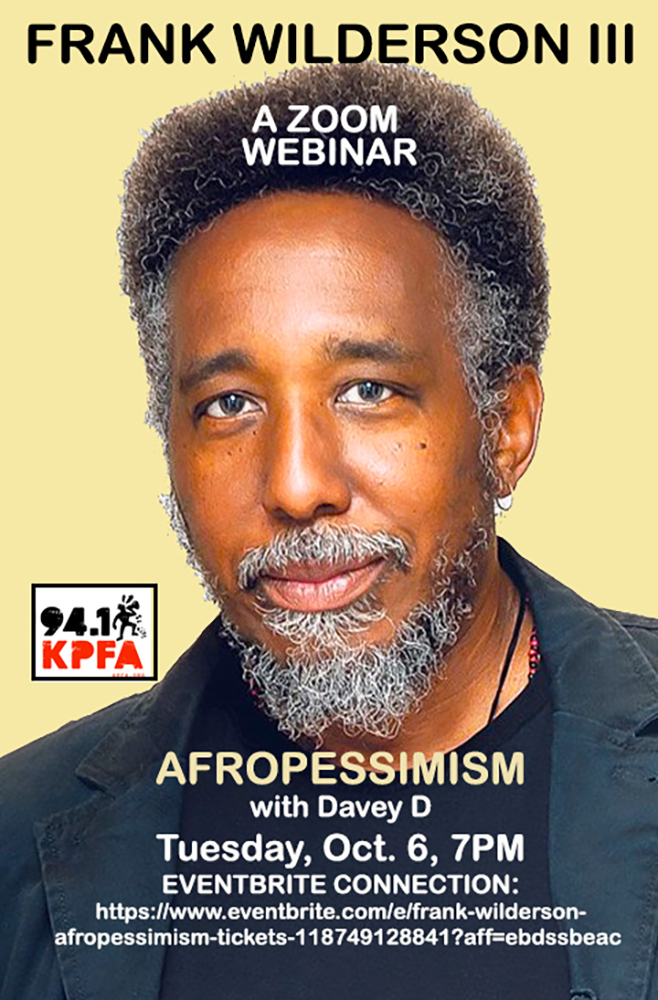 In the tradition of Edward Said’s “Orientalism” and Franz Fanon’s “Black Skin, White Masks,” Wilderson’s “Afropessimism” is a brilliant account of the experience of being Black.

The Black radical tradition has drawn upon the term as a way to acknowledge the power, depth, and vitality of the resilience and radical imagination of people of  African descent.

A seminal work that strikingly combines groundbreaking philosophy with searing flights of memoir, Afropessimism presents the dynamic principles of an increasingly influential Intellectual movement that theorizes blackness through the lens of perpetual slavery.

Rather than interpreting slavery through a Marxist framework of class oppression, Wilderson demonstrates that the social construct of slavery, as seen through pervasive, anti-Black subjugation and violence, is hardly a relic of the past but an almost necessary force in our civilization today and that Black struggles cannot be conflated with the experiences of any other oppressed group.

In exceptionally clear prose, Wilderson juxtaposes his own seemingly idyllic upbringing in mid-century Minneapolis, Minn., with the harsh reality he would later encounter, whether in radicalized, late 1960s Berkeley or in the slums of Soweto.

Following in the rich literary tradition of works by W.E.B. DuBois, Malcolm X and James Baldwin, “Afropessimism” reverberates with wisdom and painful clarity.

A professor and chair of African American Studies and a core faculty member of the Culture & Theory Ph.D. Program at UC Irvine, Wilderson is an award-winning writer whose books include “Incognegro: A Memoir of Exile and Apartheid; and Red, White, &amp; Black: Cinema and the Structure of U.S. Antagonisms.”

He spent more than five years in South Africa, where he was one of two Americans to hold elected office in the African National Congress during the apartheid era. He also was a cadre in the underground.

His literary awards include the Zora Neale Hurston/Richard Wright Legacy Award for Creative Nonfiction; The American Book Award; The Maya Angelou Award for Best Fiction Portraying the Black Experience in America; and a National Endowment for the Arts Literature Fellowship.

Davey D is a nationally recognized journalist, adjunct professor, Hip Hop historian, syndicated talk show host, radio programmer, producer, DJ and media and community activist. Originally from the Bronx, N.Y., Davey D’s been down with Hip Hop since 1977. A graduate of U.C. Berkeley, Davey D is the co-founder and host of many of the most cited Hip Hop radio and online news journalism projects.

Hard Knock Radio (HKR) is an award-winning daily syndicated prime time afternoon show focusing on Hip Hop culture and politics. It originated in 1999 on KPFA 94.1 FM in the Bay Area, and now can be heard in Seattle, Wash., Atlanta, Ga., Portland, Ore., and Fresno and is streamed live over KPFA.org, where it reaches close to a million listeners every weekday.

For tickets, please go to: https://www.eventbrite.com/e/frank-wilderson-afropessimism-tickets-118749128841?aff=ebdssbeac