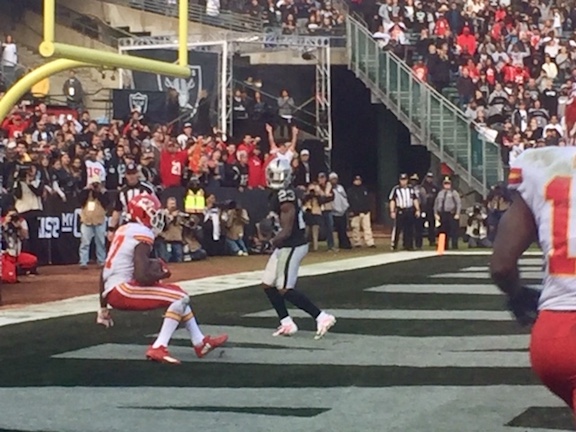 Oakland, CA – The Kansas City Chiefs faced some harsh scrutiny after one of their top  Running Back, Kareem Hunt was put on the NFL’s exemption list and then placed on waivers due to an online video of him assaulting a young woman that was released by TMZ just 48 hours ago.
After severing ties with Hunt, the Chiefs got back to football but the Raiders tried to take advantage of any opportunities to best their rival’s.  After four turnovers along with missed opportunities, Oakland made it interesting with a comeback in the fourth quarter despite the 40-33 loss to the Chiefs.
A competitive game between two rival teams was overshadowed by Hunts actions to warrant his dismissal by the team.  Hunt in his second year was apart of the draft class that included teammate Patrick Mahomes.  While Mahomes continues to join an elite class of quarterbacks he addressed Hunt in his press conference.

Mahomes finished 23 for 38 for 295 yards and threw four touchdowns that included a late touchdown pass to Chris Conley with less than 2 minutes on the clock.  The Raiders had just cut the lead down to three but didn’t have enough time to stage a another comeback.  After kicking a field goal Oakland tried an onside-kick but failed to get the ball.  Kansas City let the clock run out for the win.
“I feel like with this team, we’ve had open line of communication,” said Mahomes.  “I think the league does a good job of giving us resources.  If you utilize those things, you can keep yourself in the right position to play football.”
Ware replaced Hunt as the starter and got a touchdown of his own in the third.  Ware scored on a direct snap on 4th and goal for the 1-yard touchdown giving the Chiefs a 26-10 lead.  Ware who was very close with Hunt had a few words on his friends release.

Derek Carr led his offense in the fourth with two touchdowns with 6:46 left in the game.  An unbelievable effort by the Raiders offense.  Carr connected with Lee Smith for a 1-yard touchdown and then found Marcell Ateman for a 9 yard touchdown.  Carr finished 29 for 38 for 285 yards and threw three touchdowns.  The biggest problem for Oakland was the turnovers.
The Raiders committed four fumbles and three of those fumbles led to 13 points for the Chiefs.  Oakland has now recorded their tenth loss of the season.  Doug Martin who rushed for a 1-yard touchdown in the second was one of four who lost the ball today.
“It’s disappointing,” Martin said.  “I don’t think it should have been that close.  We should have been on top. The turnovers really, really hurt us.  Who knows?  The better team who didn’t make the most turnovers won.”
The Raiders had a chance to change the momentum of the game after Kansas City fumbled on the game’s first play from scrimmage.  Travis Kelce fumbled the ball and the Raiders recovered.  But the offense failed on 4th down due to a holding call on Rodney Hudson that forced them to punt giving the ball back to the Chiefs who scored on the next drive.
Kelce then recored two touchdowns and finished the game with 12 catches for 168 yards.  While the Raiders had a great effort today, they must erase this loss and get ready for the Pittsburg Steelers next week.
“We’re playing good football,” said Jon Gruden.  “We played good last week in Baltimore. They’re a good team. I don’t know how they did today, but we were close with them going into the fourth quarter.  I’m really proud of our coaches, proud of our players.  We had a chance.  We got beat by a hell of a football team.”

The A’s unveil new ballpark plans to open in 2023