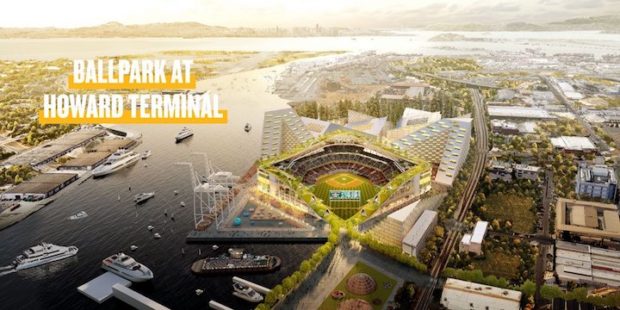 Photo by A’s/Twitter
Oakland, CA – Oakland A’s President Dave Kaval unveiled the new plan for the A’s ballpark to be located at the Howard Terminal in Jack London Square.  Confident that this new ballpark plan will be approved Kaval believes this proposal can’t lose.
“We think we have a very bold and exciting vision for Oakland,” said Kaval.  “Obviously a huge project financing aspect of this, so we’re hopeful that we can work with the Port get an option agreement first quarter next year, that’s the next order of business.  We also have to negotiate a committee benefits agreement that works for all parties and so that’s going to be another critical step in 2019.
We want to move forward with that process, we have everyone energized and moving together on this.  There’s going to be challenges in this process, there will be ups and downs.  We just want to make sure we bring the type of intensity and energy so we can open this by 2023.”

“We did a tremendous amount of community engagement where we listened to people in West Oakland, in East Oakland and I think what we found is this project is bigger than baseball,” Kaval said.  “It’s not just a ballpark it’s something that could have a lasting impact in a positive way on our community here in Oakland to ensure the A’s are here for another 50 or 100 years or really basically forever.”
The A’s will embark on a “120-Day Action Plan” focused on five key items: (1) gathering additional community feedback; (2) beginning the environmental review process at Howard Terminal; (3) negotiating an agreement with the Port of Oakland; (4) developing a framework with public officials for the Coliseum redevelopment; and (5) developing a framework for an economic and community benefits agreement.
The privately financed ballpark will anchor a new, vibrant, waterfront district that will feature housing, including affordable housing, restaurants, retail, small business space, and public gathering spaces.  At the Coliseum site, the A’s seek to transform the current site in ways that will address several specific community needs and opportunities expressed by East Oakland residents.
Larry Reid talks about the redevelopment for the Coliseum and Distruct 7:

Mayor Schaaf added, “The first step in the A’s acquiring the Coliseum land – either a purchasing or lease agreement – will be the City of Oakland buying it from Alameda County.  This is a really gorgeous starting line.” 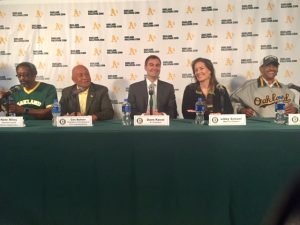