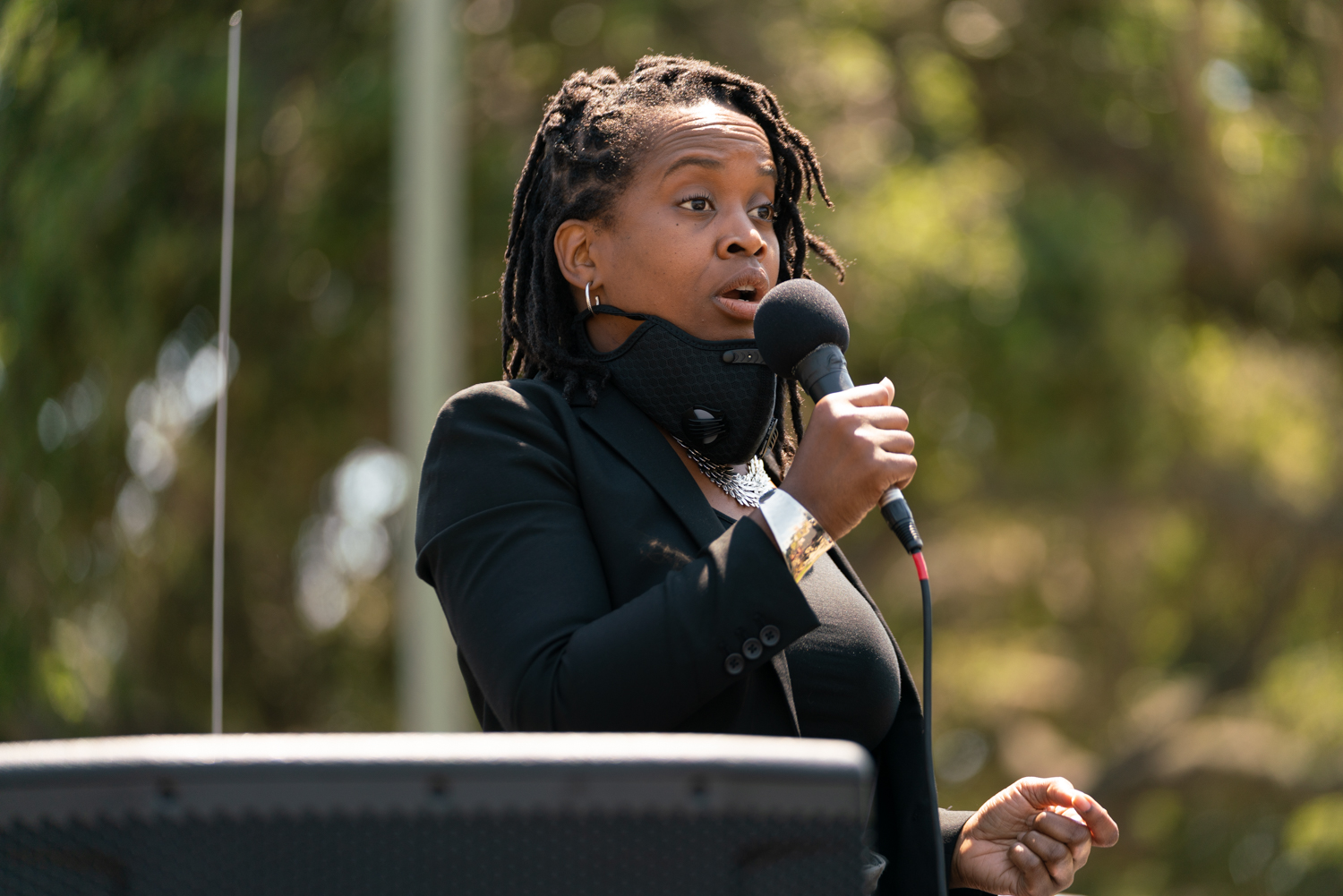 Greeted by a group of motorcyclists at Defremery Park waiting for the procession’s arrival at the final destination, the caravan worked its way around the park with signs of support while one vehicle played a message from Fife over a loudspeaker.

“Are you tired of waiting for progressive action from City Council? Are you sick of begging your elected leaders to house those without shelter, end police violence, and protect working-class families from gentrification and displacement? So am I,” was the message broadcast in a continual loop.

Once the procession stopped at the entrance of the park, Fife exited her vehicle to stand on the flatbed of a truck with speakers for a final speech for the day. Starting with a request to talk to community members to find solutions, Fife said, “I want to know what you all think, how should we govern out of City Hall, what should it look like?”

Known for being the mastermind behind Moms4Housing, where four unhoused women attempted to take over a house owned by an absentee, corporate landlord, Fife is the regional director of Alliance of Californians for Community Empowerment (ACCE). She is also a mother and a long time advocate.

According to creatingfreedommovements.org, she served as a co-founder and co-chair of the Oakland Alliance, Oakland Justice Coalition, and the Community Ready Corps working to create racial justice, increase access to quality jobs, housing, and education. Fife founded Black Women in Elected Leadership PAC and became an elected member of the Oakland NAACP’s Executive Committee.

Fife expressed her own experience living in Oakland for over two decades witnessing the changes the city has undergone, understanding the connectivity of struggles, saying legislation should come from a place of love and compassion for everyone.

“We are in a moment in time when each one of us is so critical in the fight,” Fife said. Mentioning the recent street mural at Lake Merritt that is painted with the words  “All Black trans queer nonbinary women disabled imprisoned lives matter” Fife said, “why that is important is because we are the canaries in the coal mine.”

Citing the current situation in Portland, OR, where white protesters protesting for BLM are being taken off the streets in unmarked vans by federal officers, Fife said if there had been an outcry for Black lives in recent history then situations like these would not have gone so far. “The canaries have been a signal for what is to happen to all of us inside of a state where we don’t matter. When someone’s life doesn’t matter, then anything can be done to them and it be justified,” Fife said.

Fife said it’s in the same manner homelessness can be justified because their lives don’t matter to so many people. “It’s time to change that,” Fife said. “There are folks who are going on strike, there are workers who are begging for just common decency in pay and working conditions.”

“There are teachers who cannot afford to live in the cities where they teach,” she said. “And now we are talking about re-opening them [schools] inside of a pandemic? It’s because the children who go to Oakland public schools’ lives don’t matter to someone. We have got to unite and change that.”

from the community on what they want for the Oakland A’s baseball team and its proposal to locate at the Howard Terminal in West Oakland.

“City Council is not the magic bullet,” she said. “This system is rotten from its core…we may just need to tear it down, perhaps. Or extract every piece, grain, iota of worth that we can extract from this position.”

California Split Over Vote That Could Raise Some Property Taxes