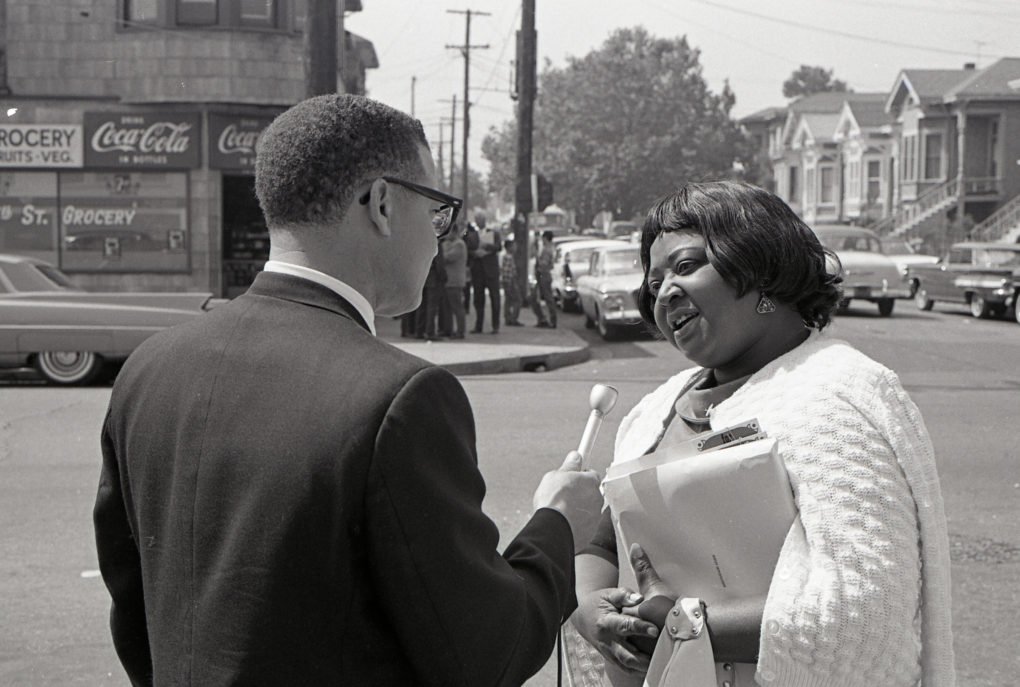 Lillian Q. Love interviewed for television in Oak Village, August 23, 1967. Source: Oakland Redevelopment Agency Photography Collection at the Oakland Public Library. The photo is thought to have been taken by Oakland Redevelopment Association photographer Harry Wade, and was printed in “Imagining a Past Future” an article by Moriah Ulinskas, published in Places Journal on Jan. 2019.

If you take a stroll through West Oakland along 10th Street, the differences you will notice looking south into the Acorn neighborhood, and looking north into the Oak Center neighborhood are striking.

Acorn’s housing is high density and mostly small homes that look similar to one another. Oak Center’s housing is colorful with high ceilings, different from home to home, and intricate in design.

The reason for the differences? The City of Oakland allowed developers to demolish almost the entire Acorn neighborhood in 1962 to execute the first phase of The General Urban Renewal Plan (GURP). As the city geared up to execute the second phase of the plan, which would have originally meant the almost total destruction of homes in Oak Center, many of which were constructed early in the 20th century, it was met with stubborn organized opposition that changed the city’s plans.

The leader of this opposition was a Black woman named Lillian Q Love, and the old Victorian homes in Oak Center were mostly rehabilitated instead of demolished.
“There is no discussion about West Oakland and its history without the name Lillian Love. There has never been a person who has been more influential in preserving the neighborhood and character of Oak Center,” said Henry Gardner, who moved to Oakland in 1971 and has previously served as Oakland’s city manager.

Love felt that homes in West Oakland needed aid, but was against the manner in which the city worked with Acorn, simply demolishing homes there instead of working to fix them. While a World War II and post-WWII migration caused the Black population of Oakland to quintuple between 1940 and 1950, discriminatory lending practices and racist zoning laws confined Blacks during that time mostly to West Oakland. But the population was far too large for the housing available, and the overcrowding was a cause for many of the area’s old homes to fall into disrepair.

“The City did more to destroy West Oakland than anyone else,” said Gardner, of the time.
Born in Texas on April 3, 1912, Love moved to Oakland as a child, and graduated from The University of California, Berkeley, probably at some point in the 1930s. She claims her organizing was inspired by her father, William E. Meneweather, who unsuccessfully fought the city over constructing public housing that displaced his family in 1938.

In 1963, Love formed The Oak Center Neighborhood Association (OCNA), an organization that pushed the city to provide housing rehabilitation funding in place of destruction and redevelopment. The OCNA then accused Thomas Bell, the first director of The Oakland Redevelopment Agency (ORA), of purposely misleading the public on GURP. Bell faced pressure to resign by the federal Urban Renewal Administration and did so in 1964, but there’s evidence that pressure from the OCNA also caused Bell’s resignation.

“He said he was with us for preservation but in his actions he was for clearance,” said Constantine Lekas, the OCNA’s original vice president, in a 1981 interview. In the same interview, Lekas claims that OCNA was able to get Bell fired, and describes his leaving the position as “a turning point.”

While Love worked almost entirely with other Black people, it’s noteworthy that some of her organizing crossed racial lines. Lekas was an immigrant from Greece.

After Bell resigned, John B. Williams became the ORA’s new director. In 1966, Love was named a commissioner for the ORA. Williams also allotted a grant to the OCNA in 1966 in the amount of $15 million for housing rehabilitation, which is about $120 million in today’s dollars when adjusted for inflation.

Williams enforced minority training and hiring policies, which required the ORA to hire and award contracts to far more non-white people than they had previously.
Love died on Feb.21, 1987, at the age of 74. Henry Gardner, who saw her speak regularly at City Hall and admired her, said she kept up her housing activism long after the Oak Center fight had ended.

“She understood the issues upside-down. And she was active until her last breath,” said Gardner.

The Oakland Post thanks Moriah Ulinskas, who provided biographical information for this article that will soon be added to the biography cards in the Oakland History Room at The Oakland Library.