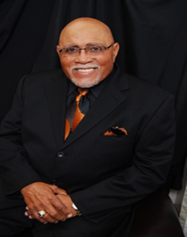 Rev. Frank Pinkard, Jr. long- viewed as the feisty, combative pastor of the iconic Evergreen Baptist Church of Oakland, succumbed to his illness comforted by his wife Kathy, Sunday morning, Aug. 26.  He was 86 years old.
Pinkard had a varied career that spanned over decades of work in political and religious circles. He was a former staffer to Calif. Assemblyman, John Miller of the then 16th Assembly district and rose to the leadership of Pastoral roles in the Presbyterian Church as well as leadership in the Baptist denomination. He pastored the Faith Presbyterian Church in Oakland, before being called to the Evergreen Baptist Church, succeeding the legendary J. L. Richards.
Pinkard relished his role as pastor of Evergreen and was catapulted to other prominent roles of leadership including the Presidency of the Baptist Minister Union of Oakland.  He became a communicator and activist for many issues of community concerns. “Pinkard was savy and articulate and invariably knew what sound bites would be relayed by the media after a community event,” commented his long-time friend and colleague Rev. Ray Williams of the Morning Star Baptist Church. “This is part of the reason that he was often the designated spokesperson for the Faith Community of Oakland.”
“This Pandemic will undoubtedly impact and alter the size of the community response to Frank’s Homegoing services, and yet he touched lives in a way that he will always be remembered.”
Related Topics:
Up Next