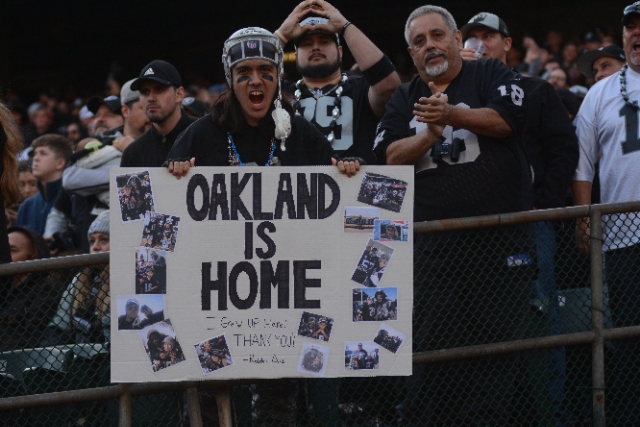 Oakland – A touchdown in the final minutes silenced the sold out crowd.  They deserved so much more but instead sat in disbelief.  Their team was not only playing their final home game of the season but this was the last game to be played at the Oakland Coliseum.  The Raiders will be moving into their new home in Sin City next season.

“I’d like to say we could’ve sent the Raiders fans off with a lot better finish that that,” said head coach Jon Gruden.  “I think most importantly, before we talk about the game, I’d like to thank the fans.  I’d like to thank the city of Oakland for supporting the Raiders and being faithful in all kinds of seasons.  I’ll miss them.  I love them and I’m sorry about the outcome today, but I think that’s something that needs to be said. An exclamation point.  I really apologize that we weren’t able to deliver a victory.  I‘m proud of our team’s hustle and effort.  We had numerous opportunities to make a play there in the ballgame, but we didn’t do it.” 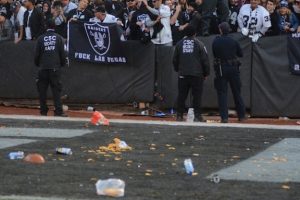 Oakland’s 20-16 loss to the Jacksonville Jaguars was the nail in the coffin to a season that seemed promising.  A win today would’ve kept the Raiders in the hunt for the playoffs with two teams (Tennessee Titans and Cleveland Browns) losing today. The defeat was felt across the entire stadium as well as with the players who wanted to leave behind so much more.

“I feel really bad about not ending this game and homestead on a note that the fans wanted,” TE Darren Waller said.  “It’s more about the city and every person that’s involved.  You want to win and go out on a high note, but at the same time, I still love the team.  The execution has to be better, but it’s more so about all the people involved and wanting to go out on a high note. That’s what I feel bad about.”

Oakland maintained the lead almost the entire game, until the final two minutes.  Daniel Carlson’s attempt at two field goals were no good.  The first attempt for 50 yards, he missed and there was a flag on the play.  The next attempt for 45 yards went far left.  The Jaguars took over with 1:44 left on the clock.  Eight plays and 65 yards ended with Gardner Minshew II connecting with Chris Conley for a 40-yard touchdown to secure their win.

You could hear a pin drop throughout the stadium.  The Raiders had a great start, on opening drive Derek Carr went deep with a 40-yard touchdown pass to Tyrell Williams for a quick 7-0 lead.  But unable to score in the end zone, Carlson kicked three field goals for 33, 34 and 27 yards in the first half for a 16-3 lead. It looked like Oakland had everything under control and the fans were happy. 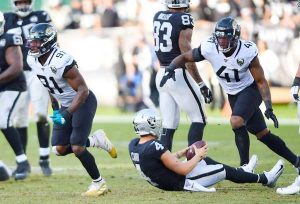 “Really three possessions is all we had,” said Gruden.  “I think we had one possession start at our 2-yard line.  We did a good job with it.  Moved it out of our territory, and I think on a fourth down and maybe a yard, a little over a yard I chose to punt.

I think we had 20 first downs and they had two at the time.  I don’t regret it.  I do now, but I didn’t regret it at the time.  We had another possession that we just came up short on.  The end of the ball game I thought we managed pretty good.  Unfortunately, we weren’t able to put points on the board.  We mishandled a pass and Jacksonville went the distance to beat us.”

On the final two plays Carr went deep with “Hail Mary” passes that ended up out of bounds.  A poor ending for any game.  The crowd began to boo loudly.  A different reaction from last year’s finale when the city of Oakland thought the Raiders played their final game at the Coliseum.  Fans were dancing on the dugouts, in their seats and chanting “RAIDERS”!  Today’s game ended with fans throwing objects on the field and booing as players ran off the field.  A terrible ending to a decade of football played in Oakland.  Former players also came out for the final game, including Charles Woodson who lit the Al Davis memorial torch before the game. 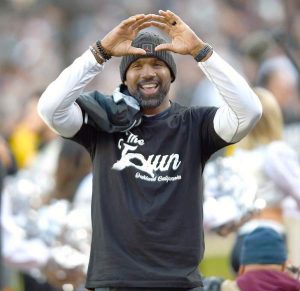 “Its disappointing not to come out on top,” Woodson said.  “It was a game we felt like we had under wraps but it didn’t come out the way we wanted it to.  But the message is these are young guys, this is a young team, they’ll fight and keep getting better and I’m looking forward to seeing their progress throughout the years.

COMMENTARY: Marvin Miller gets to the Baseball Hall of Fame…but no Curt Flood