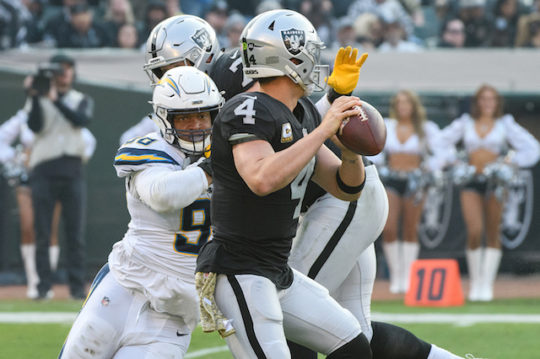 Photo by DeMarcus Davis/SB Report
Oakland, CA – Jon Gruden said two weeks ago that players are blowing up his phone to play for him.  The reality is the current players are less than enthusiastic under his new reign.  Oakland lost their fifth consecutive game and things don’t look to get any better.
The difference between the 0-10 season the Raiders endured in 2014 vs now doesn’t include management tearing the team apart.  Oakland finished 3-13 that year but today’s 20-6 loss to the San Diego Chargers leaves them wondering when will the pain end with 7 weeks left in the season.
Derek Carr explains the difference between the 0-10 team vs now:

On opening drive the Raiders offense failed to move the chains and found themselves on fourth down with the punting team on the field.  But to our surprise it was a fake punt, Johnny Townsend ran 42-yards for the first down.  Unfortunately the Chargers defense held them out of the end zone and San Diego took over on fourth down.
On the next drive Oakland got on the board first when Daniel Carlson kicked a 46-yard field goal.  DE Melvin Ingram III sacked Derek Carr and forced him to fumble while the team was in field goal territory.  That setup the Chargers tying the game 3-3 with Michael Badgley’s 37-yard field goal in the second quarter.
The Raiders reached the red zone three times and did not score a touchdown.  They haven’t scored a touchdown in nine quarters and this adds to the long list of things that need improvement.  The injuries also continue to take a toll on the team, today they lost Martavis Bryant to a knee injury.
“You move the ball straight down the field, which I felt we moved it pretty well all day,” Carr said.  “We were 0-for-3 in the red zone on touchdowns.  That’s terrible.  Gotta work on that.”
Philip Rivers connected with Keenan Allen for a 11-yard touchdown extending their lead 10-3 with 24 seconds left in first half.  San Diego then opened the third quarter with Rivers going deep to Melvin Gordon for a 66-yard touchdown pass making it a 17-3 game.
Carr showed some life in the final seconds of the third when he connected with Doug Martin for 23 yards then found Jared Cook for 31 yards and the first down.  The first opportunity that Oakland got in the red zone to move the chains consistently.  That setup Carlson’s 30-yard field goal.
Martin had 49 yards on 10 carries early in the second quarter.  He finished with 15 carries for 61 yards.  Martin was the best weapon the Raiders had today, giving some life to the running game but the offense struggles continue.  Carr completed 24 of 37 carries for 243 yards. He was sacked four times, including one that led to his fumble.
“He is pretty good,” said Gruden on Martin.  “Running and catching, he is doing a lot of good things.  When we get behind on two scores or when we can’t get out of normal situations, we become one dimensional It is hard to run the ball when you are behind two scores, but he has done a lot of good things.”
A few questionable calls came in the fourth when Rivers was sacked by Jonathan Hankins and Shilique Calhoun.  A roughing the passer penalty was called moving the Chargers closer to the red zone.  On the play before that San Diego had scored a touchdown but that was brought back due to offensive holding.  Nonetheless, Badgely kicked a 41-yard field goal to extend the Chargers lead 20-6.
Late in the fourth Carr led his offense downfield with ease.  But on 4th & 5 he threw the ball away which left the crowd in dismay.  Clearly there were other options, but the play was designed for Jalen Richard who was covered.  Another one of few opportunities for the Raiders that was unsuccessful today.
Head coach Jon Gruden explains what happened on that play:

49ers embarrass Raiders in final Battle of the Bay matchup