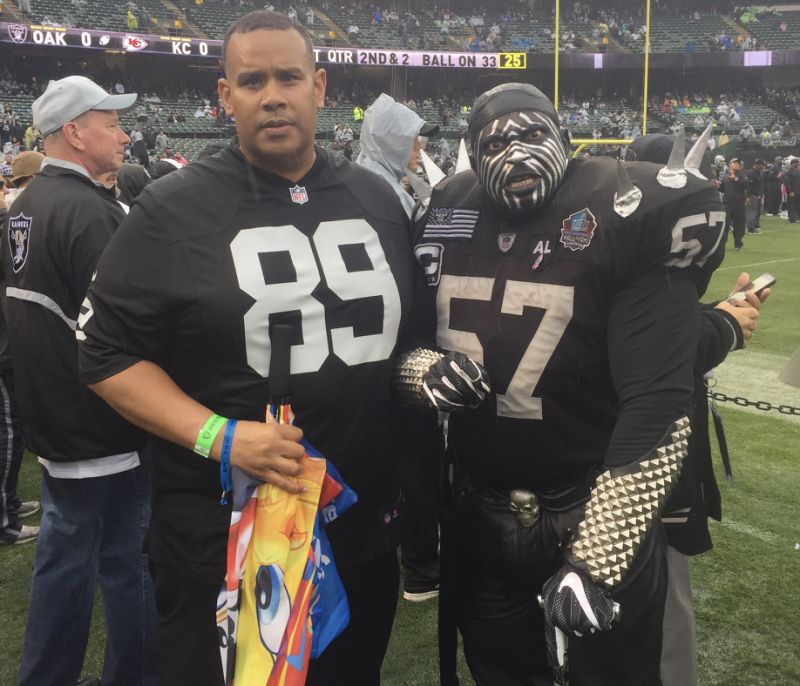 Ray Bobbitt (left), pictured with Raiders superfan Violator, is in a group lobbying for a team in Oakland. (Photo provided by Ray Bobbitt).

A group of African American entrepreneurs and business people have put together a history-making proposal to purchase the Oakland Coliseum for $92 million to create the first Black-owned NFL team.

This is more than just about football, says Ray Bobbitt one of the Oakland business owners and a member of the African American Sports and Entertainment Group (ASSEG), which developed the proposal.

“Historic design, having it be the first African-American owned football team in the NFL,”  he said.

Seventy percent of the players in the National Football League are Black, and the NFL made about $16 billion in national revenue in 2019.   Yet there has never been a Black-owned team In the history of the league.

A lifelong Raider fan who grew up in Oakland,  he views the proposal as much more than about sports: it is a way to enrich and empower the community. “We would add an educational component to the facility,” Bobbitt said. “We want to add a Bay Area sports and entertainment museum, utilize funds to help increase education in East Oakland.”

In a letter to Oakland Mayor Libby Schaaf and Oakland City Council members,  Bobbitt wrote for the AASEG team, “We recognize the interests of city leadership in the holistic redevelopment of the Coliseum area….(and) in maintaining a home for its Major League Baseball franchise.”

“We believe that all these objectives can be achieved and to these ends, we have assembled a Master Development Team well-capable of marshaling the resources and expertise necessary to transform our mutual interests into reality.”

Taking into consideration the aspirations of Oakland residents, the ASSEG Team’s proposal includes:

“As America wrestles with social change, social justice and economic justice, Oakland can lead the way by demonstrating what the real impact is. As proud Oakland (residents), it is a part of our DNA. It is simply who we are and what we do best.

“We look forward to helping lead that change in the City of Oakland.”

City Council President Rebecca Kaplan told the Oakland Post that she is enthusiastic about what the proposal can mean for the community.

“I’m excited about the possibility of more African American-owned businesses in Oakland and economic development and housing and more that benefits the community including WNBA, affordable housing, restaurants, hotels, local jobs and more,” said Kaplan.

“The mayor has tremendous respect for Mr. Bobbitt and other Black entrepreneurs who want to make significant investments in Oakland, as well as claim long overdue ownership stakes within industries like the NFL.

“The vision of Mr. Bobbitt’s group is a historic one that would make Oakland the home to the first African American-owned football team in the NFL — a league that desperately needs more diversity among its fraternity of owners.”