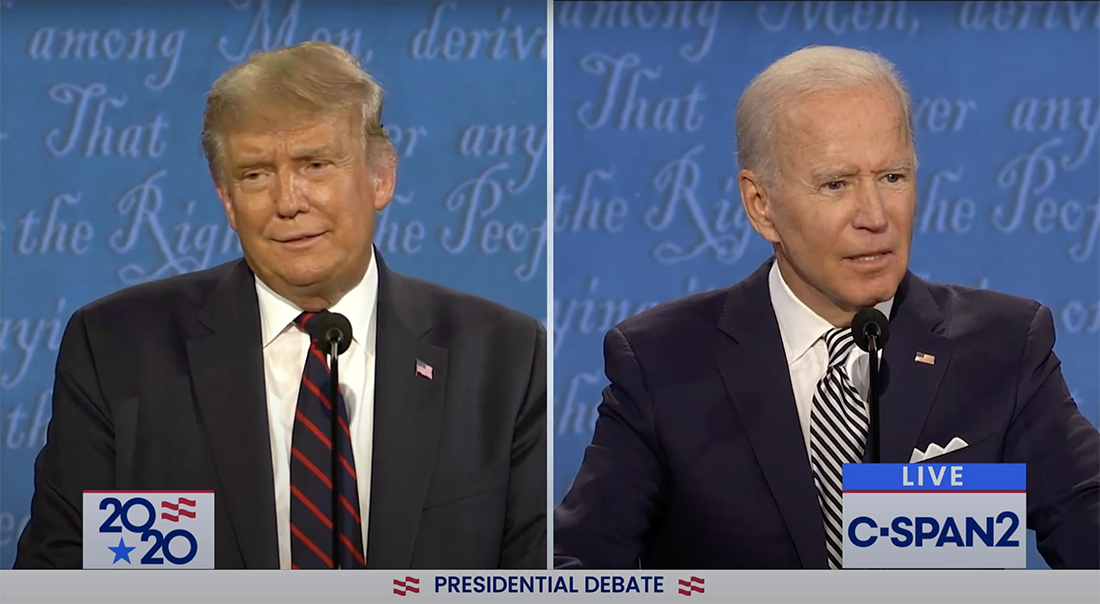 The first presidential debate on Tuesday night left little room for policy issues as President Donald Trump interrupted Former VP Joe Biden and at times, talked over the moderator, Chris Wallace. Biden had spoken over Trump as well, but much of the mood was one of frustration that resembled a schoolyard argument between a bully and his victim attempting to explain their position.

Biden brought up Trump’s COVID-19 pandemic response several times, mentioning 200,000 lives have been lost so far and as many as 200,000 more may be lost by the end of the year. Biden also mentioned environmental issues being costly disasters across the country, while Trump focused on unsubstantial claims of widespread election fraud, “law and order” and the “radical left.”

WALLACE: "Why did you decide to do that, to end racial sensitivity training — and do you believe that there is systemic racism in this country?"

TRUMP: "I ended it because it's racist" #Debates2020 https://t.co/8XKphUeiZp pic.twitter.com/7aTovVh5pn

When Wallace asked Trump if he was willing to condemn white supremacists and militia groups, if he would tell them they need to stand down and not add violence to cities like Kenosha and Portland, Trump responded, “Sure. I’m willing to do that,” he then said, “Almost everything I see is from the left-wing. Not from the right-wing.”

When Wallace continued to ask Trump to denounce white supremacists and right-wing militias, Biden mentioned the Proud Boys, a far-right group that has been involved in intentional violence at rallies across the country since Trump took office. Trump responded, “Proud Boys, stand back and stand by.”

Immediately after the debate, Biden’s VP pick Sen. Kamala Harris went on MSNBC to comment. She said America has a choice between Biden, saying he has experience, poise, speaks with intelligence, while President Trump was angry, defensive, spoke over Biden and attempted to bully the debate process. Harris said, “I think that the American people during this debate had a clear contrast in terms of what they’ve got, and is possible, and what they can have if they vote.”

In response to the debate, Congresswoman Barbara Lee said on Twitter and Facebook Wednesday morning, “White supremacists don’t belong in the White House.”

On DemocracyNow Wednesday morning, Executive Director of the Lawyers’ Committee for Civil rights Under Law Kristen Clarke said of Trump and the debate, “He’s promoted militarization of the police and really emboldened federal law enforcement to be used as a weapon against peaceful demonstrators.”

.@KristenClarkeJD of @LawyersComm says President Trump has intensified violence in U.S. cities. "He's promoted militarization of the police and really emboldened federal law enforcement to be used as a weapon against peaceful demonstrators." pic.twitter.com/txqWXSiROF

CNBC.com reported Wednesday morning BET Founder Robert Johnson says he will take “the devil he knows” as a businessman, adding he does not know Biden.

Republican Sen. Tim Scott told reporters on Wednesday he believes Trump needs to correct the comments he made about Proud Boys when he did not condemn white supremacists and violent right-wing groups. He said, “White supremacy should be denounced at every turn. I think the president misspoke, and he needs to correct it.” Scott then added, “If he doesn’t correct it, I guess he didn’t misspeak.”

When asked by reporters on Wednesday about his comments on Proud Boys and if he will denounce white supremacists, Trump called for Proud Boys to “stand down” and let law enforcement take over saying he does not know who the Proud Boys are. Trump then added Biden must denounce Antifa as a terrorist organization.