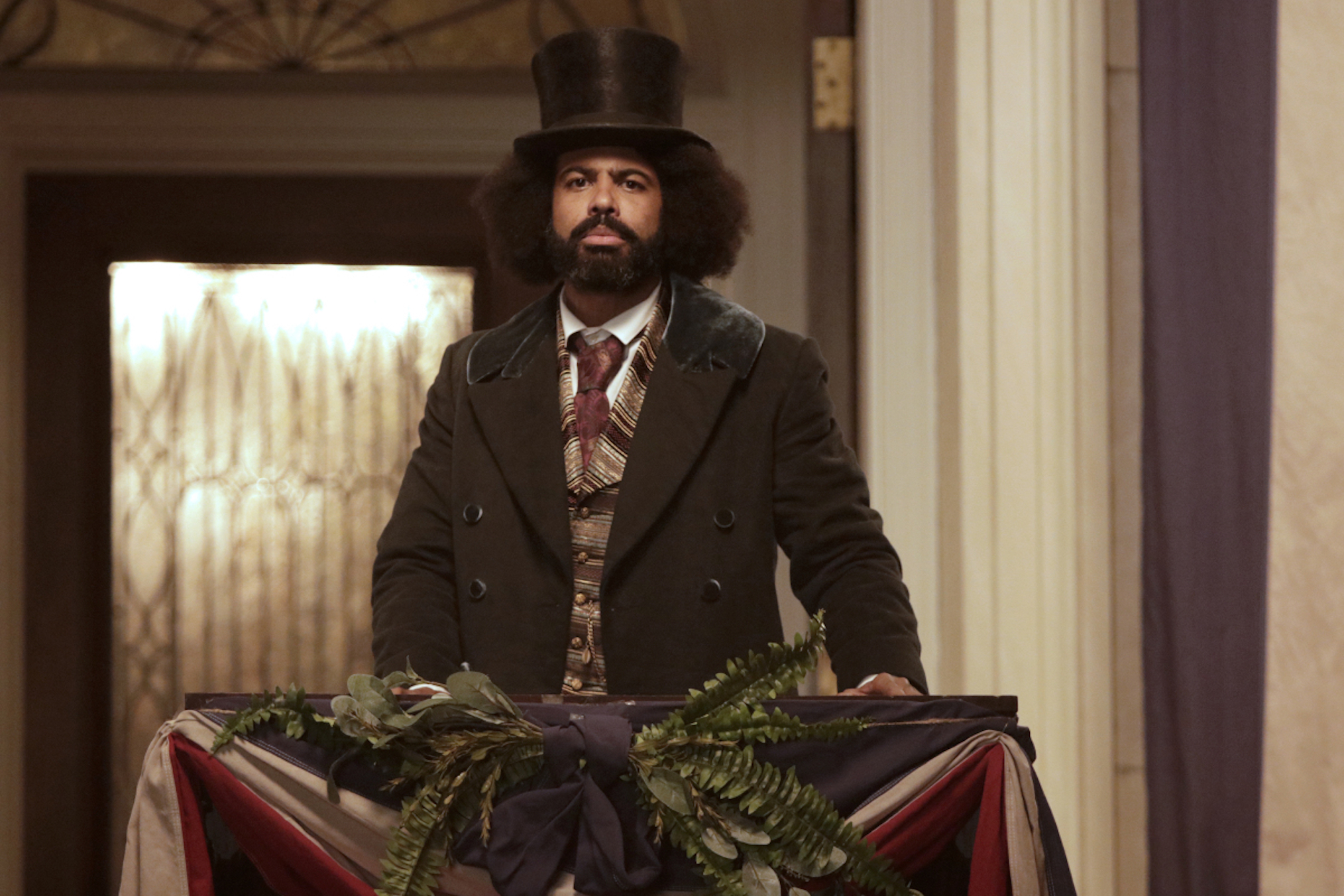 The story is told from the point of view of “Onion,” a fictional enslaved young boy (portrayed by newcomer, Joshua Caleb Johnson) who becomes a member of Brown’s family of abolitionist soldiers battling slavery in Kansas, and eventually finds himself in the famous 1859 Army depot raid at Harpers Ferry, an inciting incident of the Civil War.

“The Good Lord Bird” is an irreverent and dramatic tale of Antebellum America and the ever-changing roles of race, religion and gender in American society.   The series begins Sunday, Oct.r 4th@ 9 pm ET/PT.

I spoke with Daveed Diggs, the beloved Oakland native–turned Broadway sensation and television star — about this high energy, high impact, and very stylized story by James McBride who wrote “The Color of Water.”  Diggs is cast as legendary African American abolitionist and orator, Frederick Douglass.

Sandra Varner/Talk2SV:  I found myself in rapt attention watching your interpretation of Frederick Douglass as portrayed in this James McBride story.  As such, Douglass knows the power of his human currency as a person of literal value; equally, the power and prowess of his persuasion as an orator. Did you see those aspects as characteristics you needed to draw upon?

DIGGS:  Oh, definitely, and that’s a great observation.  I think it was really necessary to portray a Frederick Douglass who was very aware of what he was capable of and what he was doing.  He had a sense of pride that could come off as overblown or pompous.  He was that good and that famous.  You don’t know very many people who become that famous and that good who don’t know it.

TALK2SV: So, in keeping with this reflection of Douglass, do you own the power of your prowess as an artist?

DIGGS:  It’s a conversation I’m having weekly with my therapist, laughter.  I don’t know that I do or at least, I haven’t found the same comfort in it.  Part of that, I think, is good because it keeps me trying new things, keeps me from thinking that I’ve figured it out; at times, it can be detrimental. I think sometimes I look for help. I look to offset the responsibility or agency (of my talent) and that’s not always the right thing to do. Sometimes, I actually am the adult in the room [laughter] and I’m trying to come to terms with that, but, it’s hard.

TALK2SV:  It is said of this story, that the slave uprising at Harper’s Ferry (in Virginia, October 1859), was the precursor to the Civil War. If allowed, I’d liken Frederick Douglass as the precursor to Martin Luther King, Jr.  Do you think the dots connect well between these two extraordinary men?

DIGGS:  I do.  I do. If you can attach a really powerful message with virtuosic writing and attach a person to that, you have a figure with the power to change culture and create culture. I think Frederick Douglass was aware of that [essence] and I think Dr. King was aware of that, too.

I grew up working with Youth Speaks (www.youthspeaks.org), a poetry organization in San Francisco, which focuses on teenagers writing poetry. A primary reason to teach Spoken Word to young people is it forces you to make Spoken Word sound pretty; forces you to take your very valid ideas and come up with a way to make people listen to you, even if they are not particularly conditioned to listen to you. That’s a really powerful tool for young people. And that’s the same rubric that I think MLK and Fredrick Douglass were working with–if my mouthpiece is strong enough, if I can work these words and perform these words in a way that will move people, spiritually and emotionally–that is how you get people on the side of a cause.

TALK2SV:  You have created a distinguished footprint, already.  Let’s let’s talk about your performance cachet, specifically, portability and transmutability.  You flow seamlessly between stage, television and film.  What anchors your performance arc that allows you to virtually transport us, the viewer, and go along with you in each format, no matter the character portrayal?

DIGGS:  Just trying to understand the mechanics, I’m still learning how to do that in the TV space and in the film space, too. I did so much theater coming up — I understand the mechanics of the stage, very well.  It’s the thing I fall back on, the technique of it; I know what reads to a (performance) house of various sizes. I’ve played in every size house there is.    So I have the technical ability to adapt.  The more I work in the TV and film space, the more I understand those technical elements along with the other part of it. I can’t remember who told me this, either a director I was working with or an actor but, they said 80% of the job is to understand the tone of the piece. I really do find that to be true. If you understand the spirit of the piece you are making, you can be successful, but it really has to do with looking at the totality of the piece. What is the world we want to be snuck into? Make all your choices and point back to them; when I do that, then, I find I am in better shape.