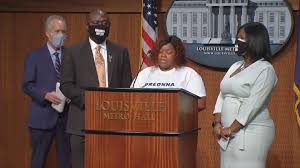 During a press conference held on Tuesday in Louisville, Ky., Mayor Greg Fischer announced that the city had agreed to settle the wrongful death lawsuit filed by the family of Breonna Taylor for $12 million.

It is the largest sum paid by Louisville in a police misconduct case and the largest for a Black woman killed by police in the U.S.

“[The] family is pleased that the city was willing to collaborate on meaningful reform,” Sam Aguiar, attorney for the Taylor family, told HuffPost. “Now, we’re counting on the AG and DOJ to do the right thing and hold all responsible officers accountable.”

The city also announced police reforms such as a housing credit so officers can afford to live in the communities where they work, address police accountability and link social workers with police when addressing issues like homelessness, mental health emergencies and addiction.

Taylor was killed on March 13, 2020, when police broke through her front door with a battering ram on a no-knock warrant based on a visit to her home by a former boyfriend, an alleged drug dealer who was already in police custody.

According to a CNN report, Taylor and her current boyfriend, Kenneth Walker, were awakened by knocking shortly after midnight when they had both been asleep. They went into the hallway to inquire who was there but got no answer.

Police then broke through the door using the battering ram. In the dark, Walker a licensed firearms owner, shot Sgt. Jonathan Mattingly. Officer Myles Cosgrove fired six shots but hit no one.

From his position outside on the patio, Brett Hankison discharged his weapon, spraying at least 10 bullets into the house. Taylor was shot eight times and died in a pool of blood on her apartment floor. Bullets also pierced the dwelling next door, endangering its occupants, including a young child.

According to Vanity Fair magazine when Taylor’s mother, Tamika Palmer, rushed to the scene, she was at first told her daughter was at a hospital. When she returned to her daughter’s house, police cynically asked her if her daughter had any enemies when they knew they were responsible for Taylor’s death.

Palmer spoke briefly at the press conference but signaled that she wanted more. “We must not lose focus on what the real drive is,” she said. “With that being said, it’s time to move forward with the criminal charges because she deserves that and much more.”

“Her beautiful spirit and personality is working through all of us on the ground,” Palmer added of her daughter. “So please continue to say her name: Breonna Taylor.”

Another lawyer for the Taylor family, Lonita Baker, said criminal charges should be brought for the officers involved in Taylor’s death. “Justice for Breonna Taylor is multilayered,” Baker told the Huffington Post. “We’re not gonna stop our cause to hold the officers responsible for Breonna’s death accountable. We’re gonna continue to put pressure on the attorney general’s office to present a fair case to the grand jury. We know that that indictment is coming from the grand jury.”

The two officers who entered Taylor’s home, Mattingly and Cosgrove, are still employed by the police department although they are on administrative leave.

Hankison, a detective, was fired from the police force in June although he is contesting his termination. Hankison is being investigated by the Louisville Police Dept. for multiple allegations of sexual harassment and assault.

“Your actions displayed an extreme indifference to the value of human life when you wantonly and blindly fired ten rounds into the apartment of Breonna Taylor,” assistant chief of the Louisville Metro police, Robert Schroeder, wrote in Hankison’s termination notice.

Walker was initially arrested for shooting Mattingly but was released when the Jefferson County District Attorney abruptly dropped charges.

The FBI has opened an investigation into Taylor’s death.