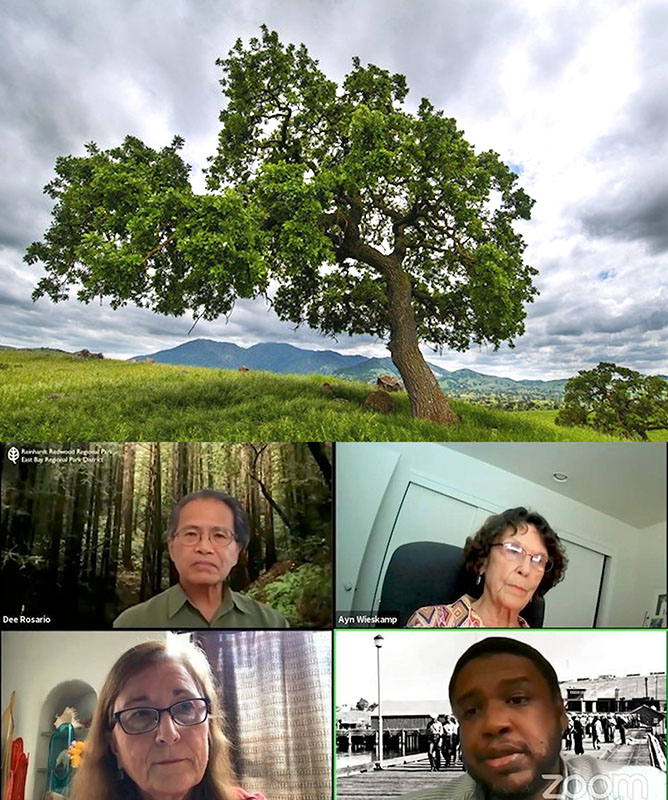 The Park includes a joint visitor center with the National Park Service highlighting the history of the Port Chicago, the Naval Magazine National Memorial, and the Diablo Valley. This is also the former site of the Concord Naval Weapons Station, and Port Chicago, when on July 17, 1944, over 5,000 tons of munitions at Port Chicago exploded, killing 320 mostly enlisted African American sailors, which accounted for a quarter of all African American deaths in World War II and highlighted racial inequality within the Navy.

After the explosion, 50 sailors, eventually known as the Port Chicago 50, refused to return to load munitions because no safety measures had been implemented, and were sentenced to 15 years in prison.

They were released at the end of the war. A white lieutenant and later, Thurgood Marshall, defended these men at their trial. “This is not 50 men on trial for mutiny,” Marshall said, “This is the Navy on trial for its whole vicious policy toward Negroes.”

Today, names are being sought for the naming of the Concord Hills Regional Park. One name is the “Thurgood Marshall Regional Park” to honor the life and work of the Supreme Court Justice who fought for the civil rights of both Native and African Americans, especially the Port Chicago 50.

The District has planned to name the Park the “Chupcan Territories Regional Park” in honor of the Bay Miwok Indian tribes who lived in central and eastern Contra Costa County. They also welcomed input from the Ohlone, Bay Miwok, Muwekma, and or Delta Miwok Indian tribes.

The Park District will welcome the community involvement and not rush the naming process. They have delayed the naming selection to ensure that all voices can be heard.

During a Board of Directors video conference meeting on Sept. 3 for the naming selection of Concord Hills, Diana McDaniel, representing the Friends of the Port Chicago National Memorial, shared her concern that the Port Chicago story will be lost, and suggested the name Port Chicago Memorial Regional Park.

Lewis Thrower, the spokesperson for Citizens for Historical Equity, said that people of color are underrepresented in East Bay Regional Park names as there are currently no regional parks named after African Americans in Contra Costa County.

Thrower and Citizens for Historical Equity recommend renaming the Concord Hills Regional Park to “Thurgood Marshall Regional Park,” and one or more neighboring parks to “Chupcan Territories Regional Park” to honor the Native tribes in Concord.

For more information, go to https://www.change.org/p/east-bay-regional-park-district-rename-bay-area-park-to-honor-thurgood-marshall?recruiter=1145248678&recruited_by_id=310cba10-ea12-11ea-86a37b226e9af80e&utm_source=share_petition&utm_medium=copylink&utm_campaign=petition_dashboard