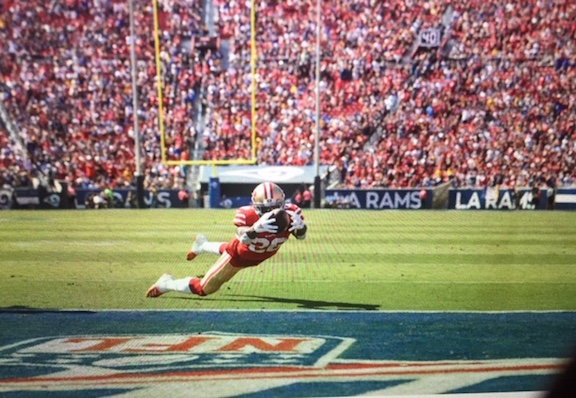 Los Angeles, CA – After three years of playing together, the Niners believe things are finally starting to fall in place.  Don’t let the undefeated record intimidate you, there’s still room for improvement.  The 49ers rolled on to their fifth win in a row.  It’s the first time the team has gone undefeated since 1990 and the fourth time in franchise history.

Today, San Francisco beat the struggling LA Rams 20-7.  Credit the defense for another extraordinary game, they held LA to 165 total net yards, the fewest allowed by the 49ers since 12/3/17 at Chicago.  The 49ers also the Rams to 56 net yards in passing the fewest by an opponent since 1/3/10 at St. Louis.

“We’re trusting one another, everybody’s doing their job and feeding off each other’s energy,” said DeForest Buckner on the defense performance.  “There’s always a lot of work to be done, with these wins you have to celebrate and move on.  We just have to take it day by day and see where it goes.”

A rocky start for San Francisco, on opening drive Jimmy Garoppolo was sacked on 3rd down.  By the second drive, things changed rather quickly.  Garoppolo found Matt Brieda for a 17 yard pass, then connected with Dante Pettis for another 19 yards.  At first and goal Garoppolo handofsf to Matt Brieda who slipped passed his defender for the 2-yard touchdown.  LA challenged the play that his knee was down but after further review, the ruling stands it was a touchdown.

“5-0 feels great no matter how you get the win,” Breida said.  “The defense once again had our backs, offense we were struggling in the red zone when we should’ve scored and shouldn’t have made the game that close.  I have to give credit to the defense they’re always there for us.”

Garoppolo finsihed 24-for-33 for 243 yards including one interception and one rushing touchdown.  San Francisco responded right after the Rams scored on their opening drive with Robert Woods muscling his way through the 49ers defense for an 8-yard rushing touchdown.  By the second, Garoppolo went deep to George Kittle for 45 yards.  Garoppolo lobbed a pass intended for Deebo Samuel but was intercepted by Marcus Peters.

The Rams went with their running game and Darrell Henderson Jr led the way, he rushed for 22 14 and 4 yards putting LA on the goal line.  On 4th and goal, the 49ers defense stopped the drive and forced the Rams to turnover the ball on the goal line with 3:14 left in the quarter.  San Francisco unable to get in the end zone, Robbie Gould missed a 55-yard goal to end the half 7-7.

To start the third quarter, Jared Goff fumbled on a lateral pass and Arik Armstead recovered.  That setup Garoppolo’s 1-yard touchdown up the middle to make it a 14-7 game.  Gould kicked two field goals for 25 and 34 yards to extend their lead 20-7.  The 49ers defesne held Goff to a career low 78 passing yards on the dayand was sacked four times.

“It’s business as usual,” said Richard Sherman unfazed.  “The previous performances should have been enough to give these guys the respect they deserve.  Everybody’s disrespecting us with, ‘Oh my God, it’s going to be a tough game.’ But we came in here without both our starting tackles, without out our starting corner, and we lost our fullback.  We could make every excuse in the world, but we don’t.  We just go out there and execute at a high level.”

Black Student Athletes in California Can Now Say, ‘Show Me the Money’