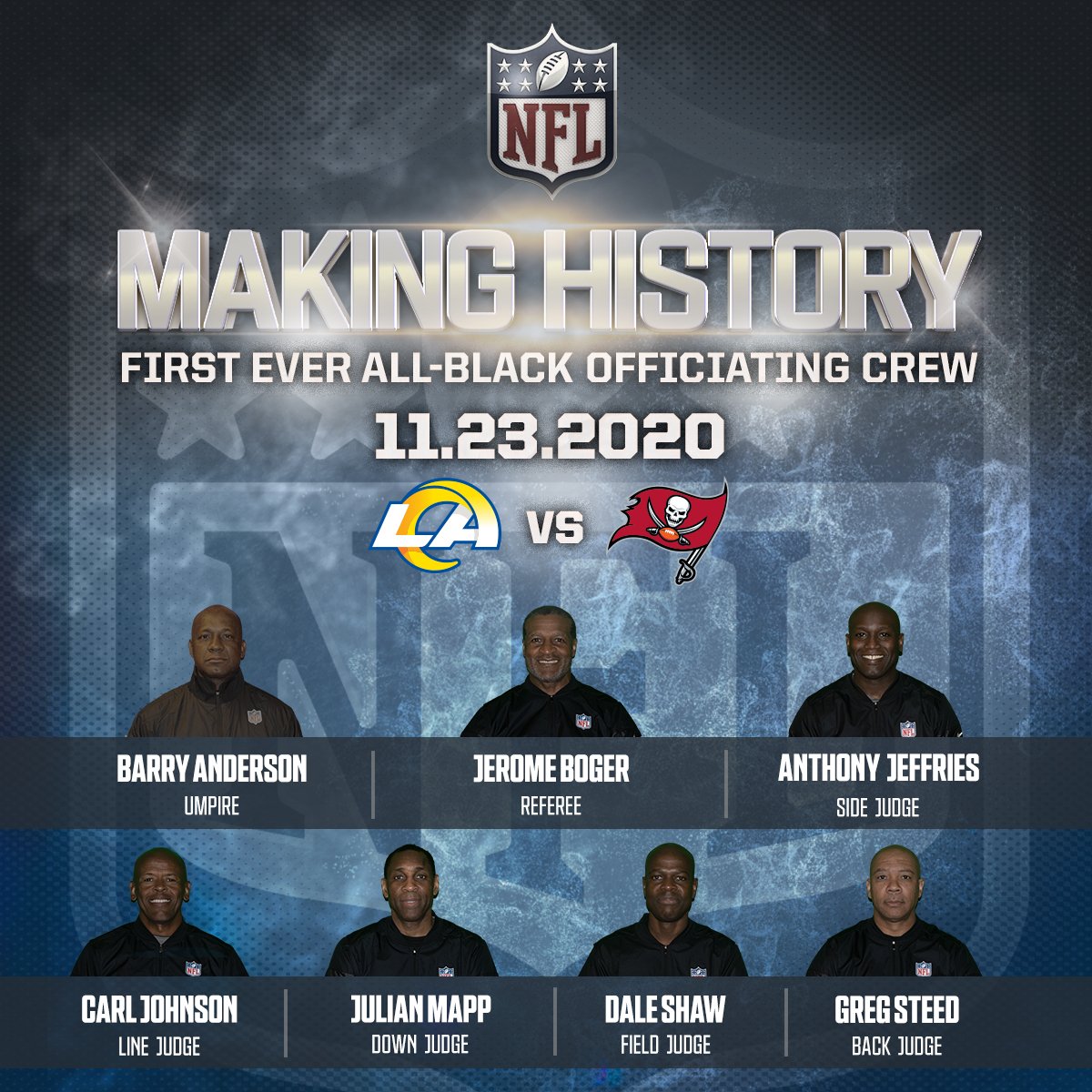 If you watched Monday Night Football last night, not only were you treated to Tom Brady catching a glorious L at the hands of the Los Angeles Rams but for the first time in the history of the NFL, we were treated to an all-Black officiating crew.

Lead by OG-triple-OG Jerome Boger, who’s got 17 years in the game, the rest of the crew was rounded out by umpire Barry Anderson, side judge Anthony Jeffries, line judge Carl Johnson, down judge Julian Mapp, field judge Dale Shaw and back judge Greg Steed.

It’s safe to assume our ancestors were proud.

NBC News reports that when the officiating crew was put together last week, Troy Vincent, the NFL’s Executive Vice President of Football Operations (who also just so happens to be Black), caught the Holy Ghost and called it “a testament to the countless and immeasurable contributions of Black officials to the game, their exemplary performance, and to the power of inclusion that is the hallmark of this great game.”

I don’t know about the hallmark, but let me mind my business. I will say that Vincent is at least partly correct, considering that out of 121 officials, the NFL currently has four Black referees and 40 Black game officials—which is a much higher dose of melanin than it has in its executive roles, coaching ranks, or other positions on prominence.

“I am proud of my heritage and excited about my participation in this historic game,” Boger said in a statement. “The opportunity to work with a great group of Black officials and exhibit our proficiency in executing our assignment is something I am really looking forward to.”

Some additional little-known facts about last night were that not only was the officiating crew Blackity-Black, but so is every coordinator on the Tampa Bay Bucs. While the Rams played a key role in reintegrating the league in 1946, according to USA Today:

“The Rams were the first NFL team to reintegrate in 1946 after a 12-year color ban, signing running back Kenny Washington and receiver Woodie Strode, which coincided with the Cleveland Browns, then of the All-American Conference, adding fullback Marion Motley and guard Bill Willis.”

The only thing missing from the game was collard greens in the concession stands.

As much as I hate that we’re still celebrating firsts for our people in 2020, shoutout to Boger and the rest of the crew for continuing the legacy of Burl Toler—the first Black official in any major sport, who was hired by the NFL in 1965—by making history Monday night.

Editor’s Note:  Burl Toler attended the University of San Francisco as did Aaron Elton Pointer, the second Black official in the NFL and a sibling of the Pointer Sisters.