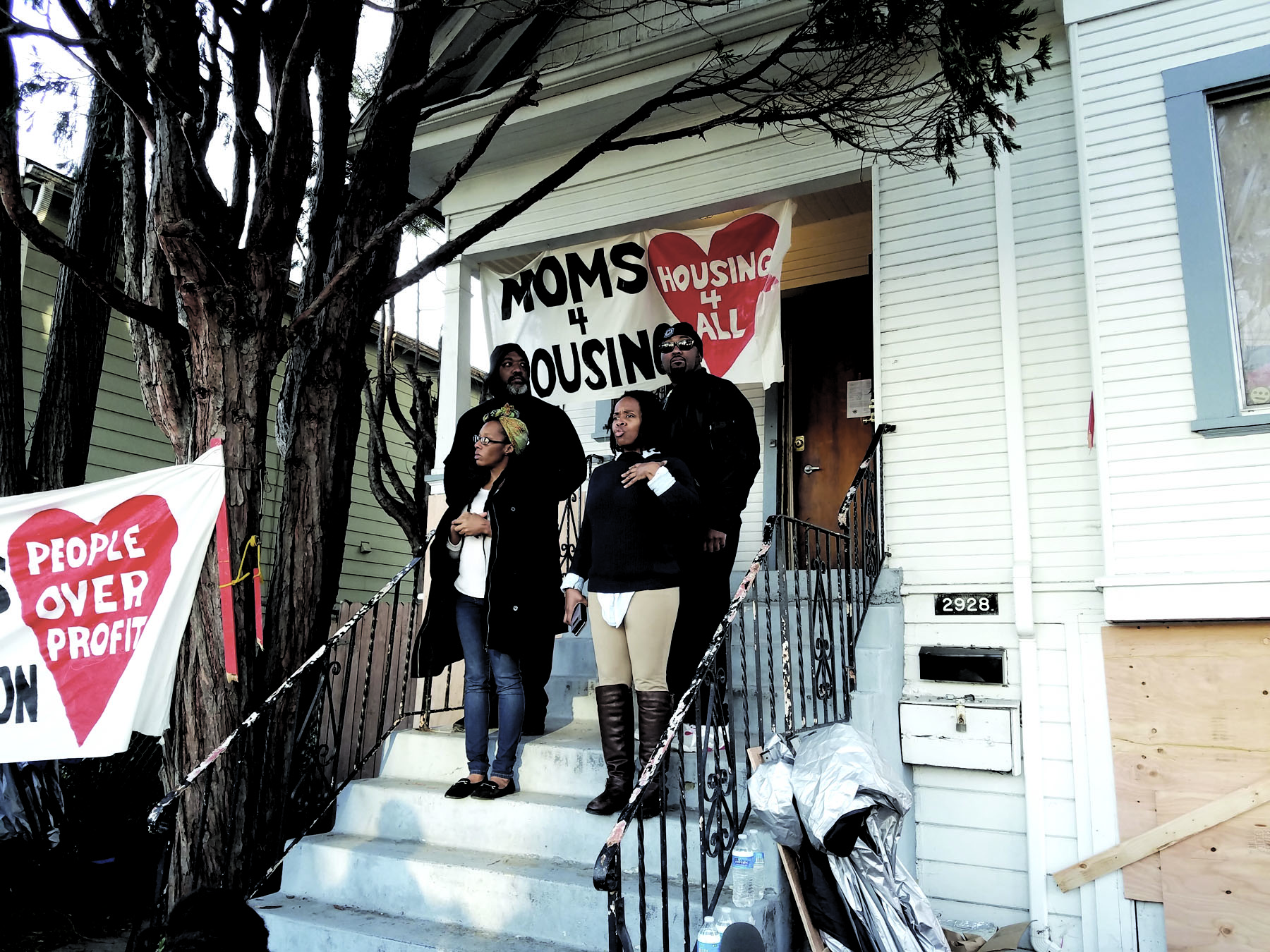 Oakland’s Moms 4 Housing hosted an international online solidarity event called “Reclaim Homes from the US to the UK” with representatives from the Focus E15 Campaign in London. It took place on Sunday at 10:00 a.m. in Oakland and 6:00  p.m. in England.

“This meeting comes at the time of the great coronavirus emergency, but for many, the emergency was already here, especially for homeless men, women and children who are across the globe. At the same time we know there are many homes and buildings which lie empty,” said Focus E15 member Saskia O’Hara from London at the event.

Both Moms 4 Housing and Focus E15 are housing justice groups that are calling for all people to be housed who wish to be. They have highlighted the fact that housing units remain empty in their communities while people who could live in those empty units remain unhoused.

Both groups have relied on direct action to seek and achieve their goals, prioritizing occupations and protests over negotiations with politicians and owners of vacant housing units. The groups introduced themselves to each other and the over 160 people who attended the meeting and talked about some of the work they have done.

“Focus E15 is a direct action campaign that was formed in September 2013 when a group of young mothers was served eviction notices while living in Focus E15, a hostel for young homeless people. That’s how the campaign got its name,” said Carolina Talaver, a doctoral anthropology candidate at U.C. Berkeley who lived in London, studied the group, and has become an active member.

Talaver explained that the young mothers and their supporters became organized because, after the eviction, the local government told them that “because of cuts to housing, welfare support, and the lack of affordable housing in London, they would have to accept private rented accommodation in different parts of the country if they wanted to be rehoused…these young moms got really organized and they started fighting back,” said Talaver.

On the one-year anniversary of Focus E15’s formation, the group occupied a social housing complex called the Carpenter’s Estate in Stratford East London, which was owned by the local government but left vacant. Focus E15 opened the estate to the public for two weeks as a social center.

“They raised awareness that this estate, which was in good condition and continues to be in perfectly good condition, sat empty. While London’s most in-need and marginalized were being forced out of the city due to lack of affordable housing, the Carpenter’s Estate was empty,” said Talaver.

Focus E15’s occupation and the circumstances it arose has similarities to an action that sparked Moms 4 Housing. Beginning on Nov 18 2019 and ending on Jan 14 of this year, when the county sheriff’s department evicted them, homeless moms who were members of Moms 4 Housing occupied a home on Magnolia Street in West Oakland that a corporation named Wedgewood owned but had left vacant. Wedgewood owns at least 125 properties in the Bay Area.

“We moved into this house to bring awareness to the crisis in our city, which is speculation. Corporations have come into our community…and pushed folks out,” said Walker of Moms 4 Housing.

After hosting rallies and events that regularly attracted more than 100 supporters during their occupation, securing vocal support from Oakland City Council members Rebecca Kaplan and Nikki Fortunato Bas as well as Gov. Gavin Newsom, Wedgwood agreed to sell the home to the mothers through the Oakland Community Land Trust. Wedgwood and the Oakland Community Land Trust are currently in negotiations to get the moms back into the home.

When both groups had finished speaking of their separate struggles and actions, the event, which lasted two hours, hosted a discussion and a Q & A. Those who participated were from Oakland and Sacramento Ca., Portland, Ore., London and Lisbon in Portugal.

“This is only the beginning. We really welcome everyone from around the world,” said O’Hara of Focus E15.

Focus E15 and Moms 4 Housing plan to host another meeting again together.