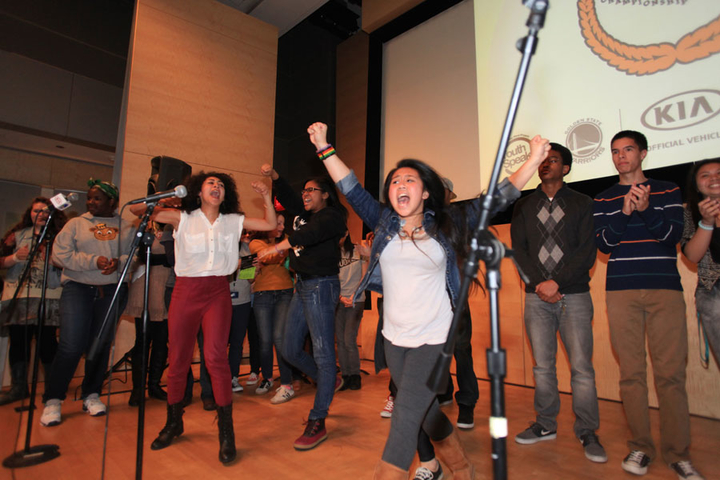 The festival will host over 600 powerful young people, representing over 50 cities and organizations from around the world, while providing a global stage for today’s most outstanding young poets to address critical topics including immigration, social justice, police brutality, and women’s rights.

The festival’s theme, “Alive now, to see the river rupture,” comes from a poem written by a Brave New Voices’ alumni, Hieu Minh Nguyen. This theme captures the volatile time we are living in, one that feels at times on the verge of rupture, and places young people at the center of the most pressing conversations of our time.

“Over the past two decades, it’s been incredible to watch Youth Speaks grow from a room of 30 poets to a global festival with over 600 participants. In today’s tumultuous political climate, there is an increased urgency for these voices to be heard,” said Youth Speaks Founder and Executive Director James Kass.

“While many Americans are currently searching for greatness in the past, these future leaders are creating greatness for the future and the Brave New Voices festival is a platform for them to speak their truth and solidify the space they will inhabit years from now.”

The finals will be hosted by Marc Bamuthi Joseph, a renowned spoken word artist named as one of America’s Top Young Innovators in the Arts and Sciences by Smithsonian Magazine.

After 20 years of traveling the country, the festival will return home to its roots in San Francisco for this special anniversary. Artfully conceived by Youth Speaks after the inaugural Youth Poetry Slam in San Francisco, Brave New Voices is the first youth-centered poetry slam in the nation’s history and is one of the largest and most diverse annual spoken word events in the world.

Since 1997, the festival has grown as a cornerstone of Youth Speaks’ programming and represents youth from across the United States, Canada, Africa, the Polynesian Islands and Europe.

Founded in 1996, Youth Speaks is one of the world’s leading presenter of Spoken Word performance, education, and youth development programs. Youth Speaks has long championed a national and increasingly global movement of young people stepping proudly onto stages, declaring themselves present.

Make Your Own Mini Comic at Marin City Library