“You Had Me at Hello’’ highlights married couples and the love that binds them. If you would like to be considered for a future “Hello’’ column, or know someone, please send nominations to Erica Wright ewright@birminghamtimes.com. Include the couple’s name, contact number(s) and what makes their love story unique.

Met: Arthur and Daveina got to know each other on the porch in front of Daveina’s home in the late ’70s on Birmingham’s west side. Daveina, then 15, was a sophomore at West End High School while Arthur, then 19, a Powderly Hills native who had attended Wenonah High School, was a freshman at Alabama State University (ASU).

The two were introduced by a mutual friend. “He was in college and I wasn’t quite at the driving age, I had my permit,” Daveina said. Arthur said, “I used to date her from her porch. We spent a lot of weekends on that porch before I was ever able to take her out.” However, they spent a lot of hours on the phone, he remembered. “That’s when folks used to have to wait in line to talk on the house phone (in the college dorm), Arthur said.

First date: “We went to see [the film] Amityville Horror, and for a steak dinner at Sizzler Steakhouse,” Daveina said, “but not before we took a drive around town. He took me to his summer co-op job at Century 21, and it impressed me to see a young guy wanting to be in business.”

The Turn: They would reunite where they began from five years before: on her front porch. “I was getting ready to come out of college (Clark Atlanta), and he had really invested in his [real estate] career…,” Daveina said. “We reconnected when I came home for Thanksgiving, but we rekindled when I came home for Christmas [that year]. I stayed for the whole three weeks and we dated and had a great time and nurtured our relationship all the way through New Year’s,” Daveina said.

The proposal: “We were together New Year’s Day, her mother was cooking dinner for all of us….and I asked her outside and said ‘we’re going to start the New Year off right. I know you’re the one for me, and I‘d like to spend the rest of my life with you and I’d like to make you my wife’ then I said, ‘do you want to marry me?’,” Arthur said.

“We kissed, I said, ‘Yes, I will,’” Daveina remembered, “then we went back inside and he got down on his knee in front of my parents and asked my daddy for my hand in the dining room. The next day, we got up and we went and found my ring and he gave it to me the following day on my birthday [January 3),” she said.

The wedding:  Vulcan Museum and Park. The colors were blush pink, and silver

“We got married in Vulcan Park, everything was real nice,” Daveina said. “It rained and after it stopped there was a big rainbow in the sky, you can see it in one of our pictures,” she said.

“We danced to Frankie Beverly and Maze all night, when everybody got ready to leave out they were singing going down the steps,” Arthur said, “they were singing ‘Joy, and Pain’ still wanting to party,” he said.

Words of wisdom: It’s all about fostering a deep connection and close-knit friendship, said the Godfreys of their 35-year marriage.

“Love is not about better communication, it’s about a better connection. You have to have a very good connection,” Daveina said, “men want a close marriage just as much as the woman does.”

Arthur added that it’s about the friendship that you build over time.

“All things and people change, but your marriage and your home are there to stay,” he said. “Over time, we have become better friends, we raised kids together, we’ve learned that we’re all we have. Especially after our parents passed,” he said. “We’ve had a lot of death and sorrow and we’ve had to overcome that and be there for one another.”

Arthur said it’s a joy to have a sophomore at A&M, a daughter in law school, and two sons in promising careers “and having [his wife] you’re able to have and share these moments with.”

Arthur is a loan officer for an area bank and Daveina is a retiree from Children’s Hospital in Behavioral Health. She also has her own company, ‘Daveina Mending Homes’, where she counsels foster children.

Daveina said she enjoys how they continue to work together “from how we handle crisis, to how we handle trips and vacations; it’s just a great joy to give love and to be loved,” she said. “Romance is everyday life.” 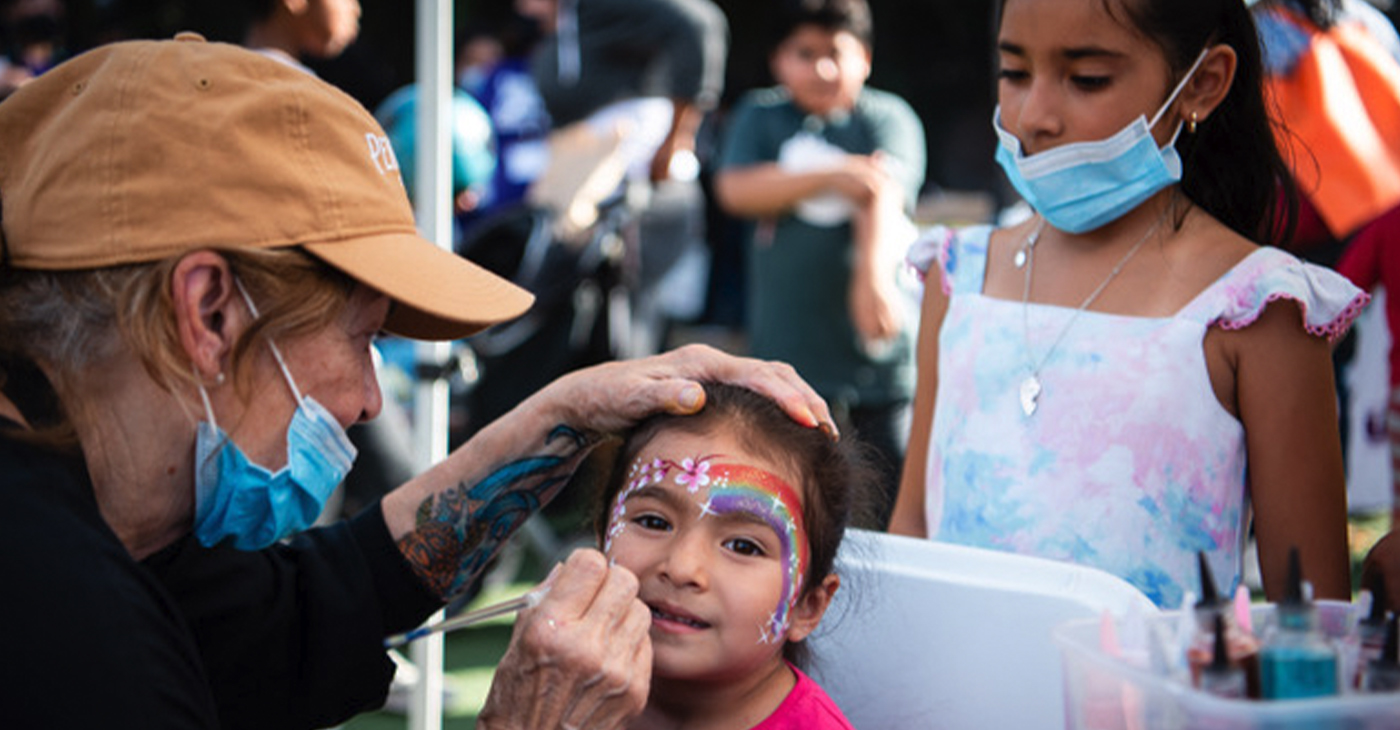 OAKLAND, CA — Over 500 people and families filled Josie de la Cruz Park in Oakland’s Fruitvale neighborhood on Aug. 2 to enjoy performances, kids activities, and mutual aid to celebrate Night Out for Safety and Liberation (NOSL), an annual national event that redefines what safety and joy is without policing. The free community event included free diapers and books for all ages, food, bike giveaways, air purifiers, self defense training, a drag show, and performances from poets and artists such as Lauren Adams, TJ Sykes and Voces Mexicanas. 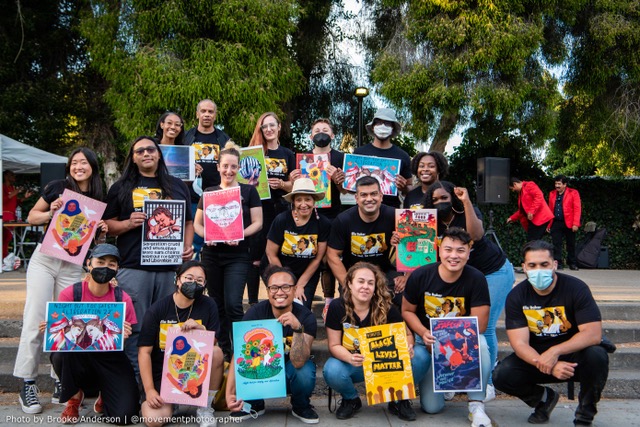 “We have been reimagining what safety means beyond police for our communities for over 25 years at the Ella Baker Center. When we create safe spaces for our community to come together and support each other, when we provide living-wage jobs so people are able to put food on their table, when we empower our children and provide opportunities for them to thrive, when we invest in healthcare and mental health resources, this is how we create real safety,” said Marlene Sanchez, Executive Director of the Ella Baker Center. 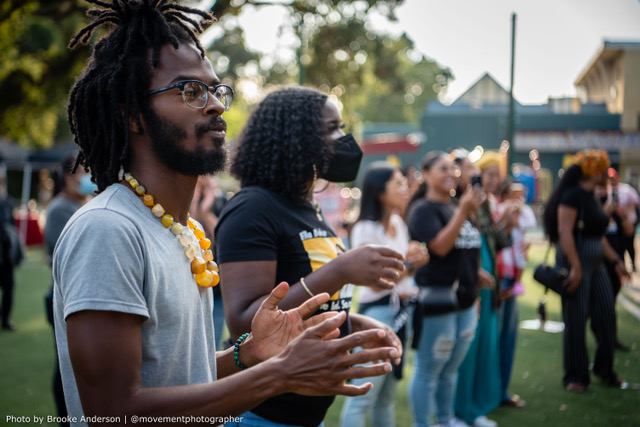 Through Night Out for Safety and Liberation, communities are creating safety not through policing but through healing and restorative justice, through creating gender affirming spaces and protecting trans and LGBTQIA communities, through reinvesting funding into community-based alternatives and solutions that truly keep communities safe. 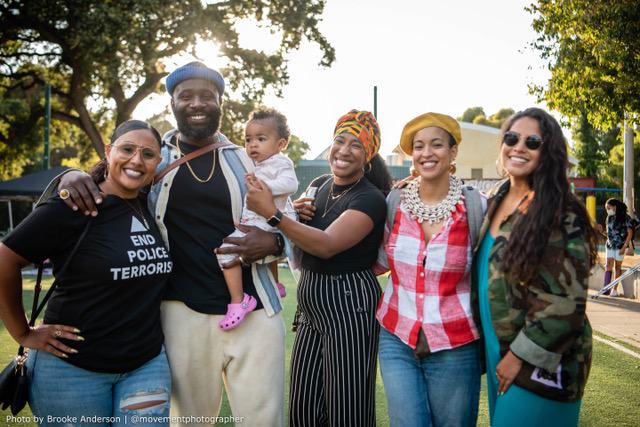 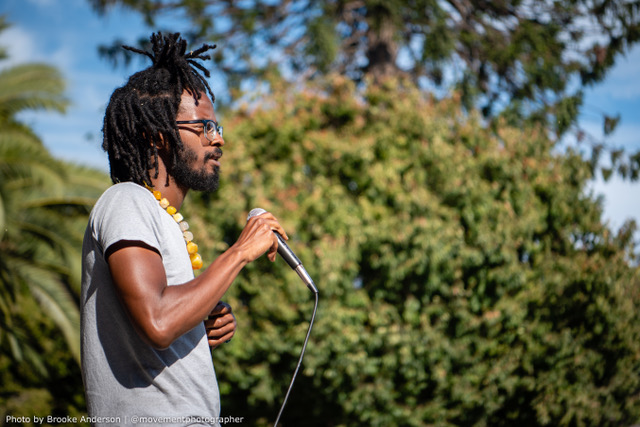 “Night Out for Safety and Liberation is about neighborhood love and neighborhood safety. It’s about connecting, showing up for each other and staying connected as a community. That’s how we keep each other safe,” said Nifa.

Center for Elders’ Independence Celebrates 40 Years in the Community

“More than 5,000 senior participants and their families have benefited from CEI and PACE during the 40 years we have served the East Bay and we look forward to being able to serve 5,000 more,” said CEI President and CEO María Zamora. 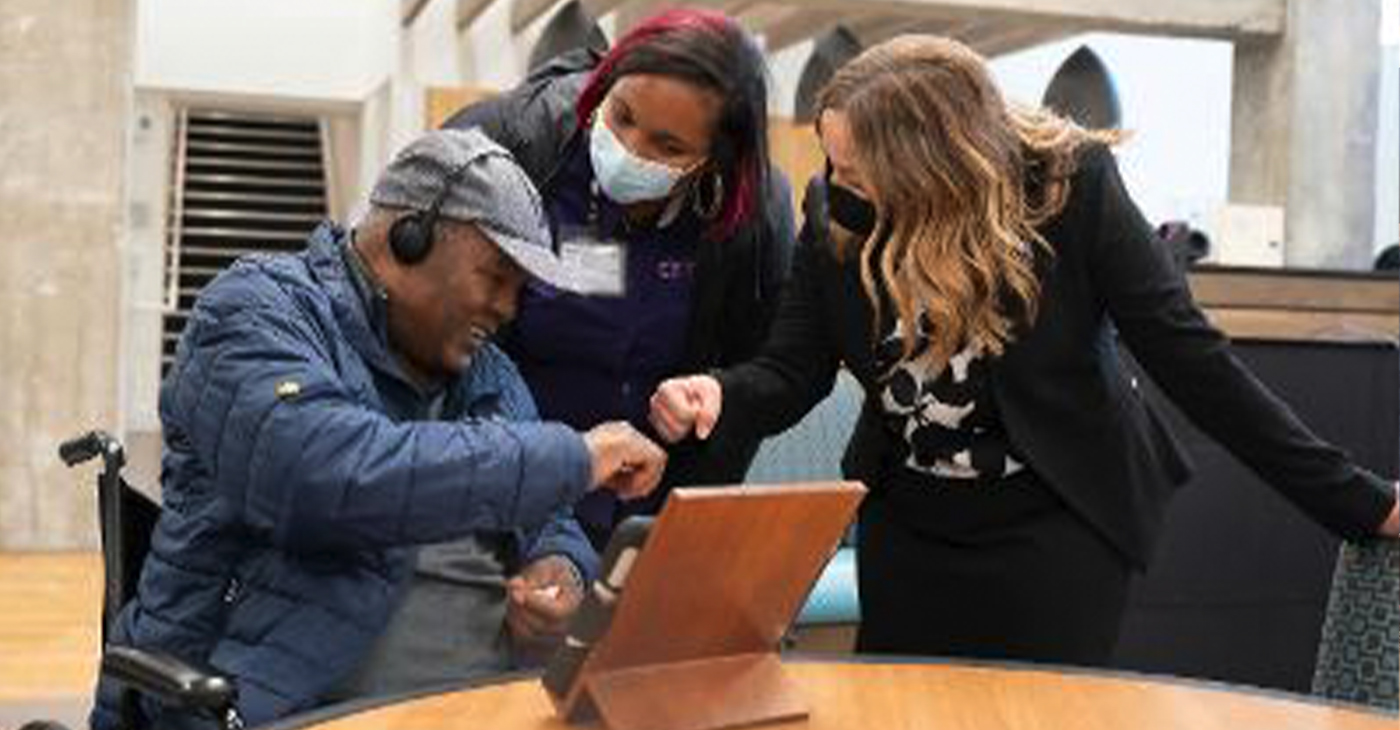 Senior residents of the East Bay gathered at the Center for Elders’ Independence in San Leandro to celebrate the organization’s 40th anniversary on July 12. About 100 participants and executives from CEI were there to celebrate the milestone with dancing, live music, food, trivia, and activities.

“Our organization has grown so much over the last 40 years that now we have more than 1,000 participants taking part in our programs,” CEI President and CEO María Zamora said. “We recognize the great responsibility we have to everyone who take part and our staff does an amazing job of meeting their needs every day.”

CEI’s participants are served through PACE, a personalized healthcare and services program, which allows seniors to receive the care they need, all while continuing to live at home.

“More than 5,000 senior participants and their families have benefited from CEI and PACE during the 40 years we have served the East Bay and we look forward to being able to serve 5,000 more.” Zamora said. 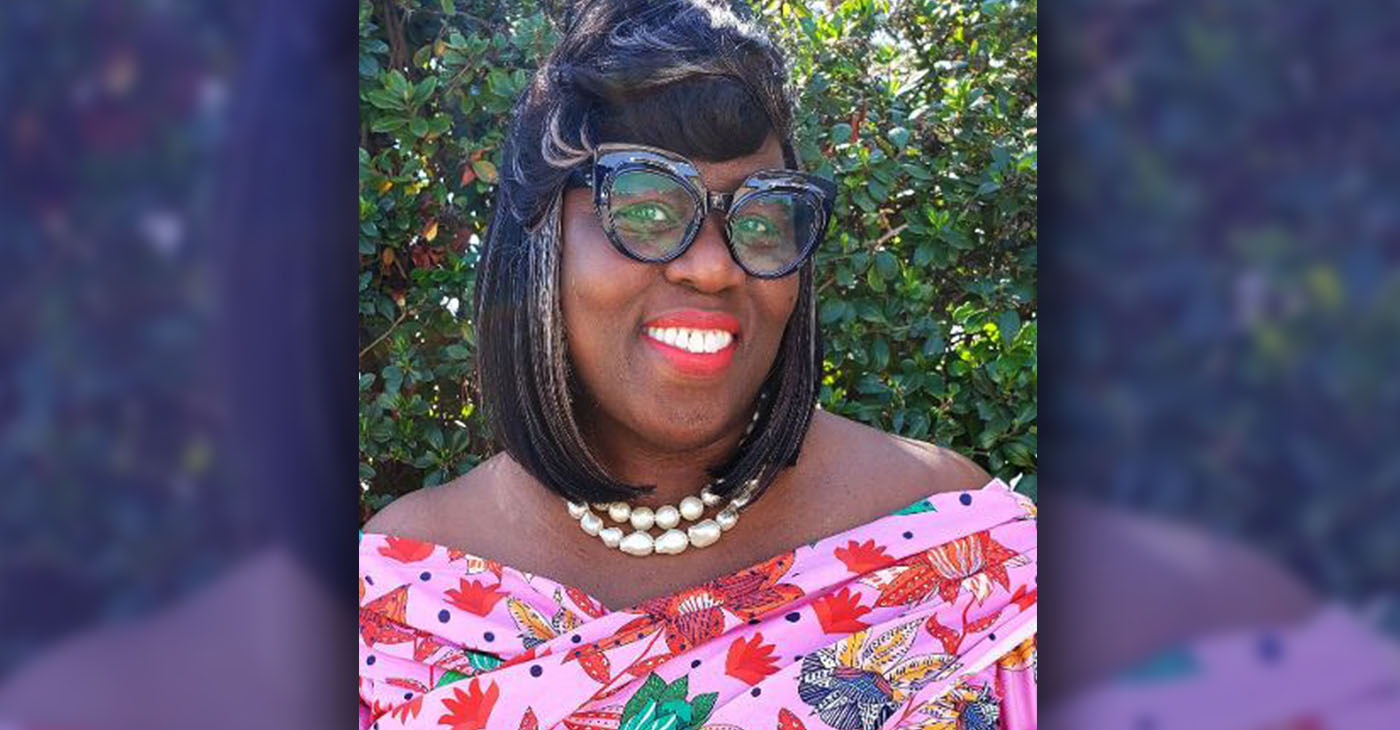 Y’Anad Burrell, CEO of Youth Uprising, says that “It was essential we offered a mental wellness program at Youth Uprising because we saw the unfortunate outcomes of social isolation and social distancing during the COVID-19 pandemic and we wanted to broaden our programs to not always think of wellness as a room and counseling, but instead think of how we could incorporate wellness in our everyday life dance.

“We have full-time clinicians but elevate the narrative of wellness that is interactive and fun. We check in with our youth on how they are adapting to this new social structure created by COVID-19,” she said.

Currently Youth Uprising’s “Wing Wednesdays” is held at their Café, but there are plans for “pop-ups” and “A Taste of Oakland,” student event in August where 10 to 15 students will showcase their food.

Burrell says that “A Taste of Oakland” is providing an opportunity for learning the elements of the culinary industry in classes teaching cooking and the business side of the café. Each station in the café will have an adult teacher to guide them on how to serve, how to greet the customer, work the cash register weekly, cleaning and sanitizing the café, and understanding the elements of being a chef.”

Burrell is especially proud of Youth Uprising’s Delinquency Prevention Network (DPN) conducted by Javion Robertson. DPN is a job readiness program training up to 20 youth reduced from 50 due to COVID safety.

DPN is Youth Uprisings most popular and well attended program and is conducted Wednesdays and Thursdays from 3:30-4:30 p.m.. To enroll contact Javion Robertson at jrobertson@youthuprising.org

Burrell noted that, “Youth Uprising belongs to our community and our youth, so we deliver on our original purpose and design. Our goal is to develop youth into leaders, and that they leave aware of how the system impacts them and are prepared.

“Our mission statement is “We believe that if we provide youth with relevant services and programs, meaningful engagement with caring adults, and opportunities to practice leadership they will become change agents and contributors to a healthy thriving community. This formula for change maintains that healthy, involved people can influence policy and ultimately create healthier, safer, and economically robust communities. It recognizes that youth are inherently resilient, and that risk can be reduced with the right set of supports, services, and opportunities.”