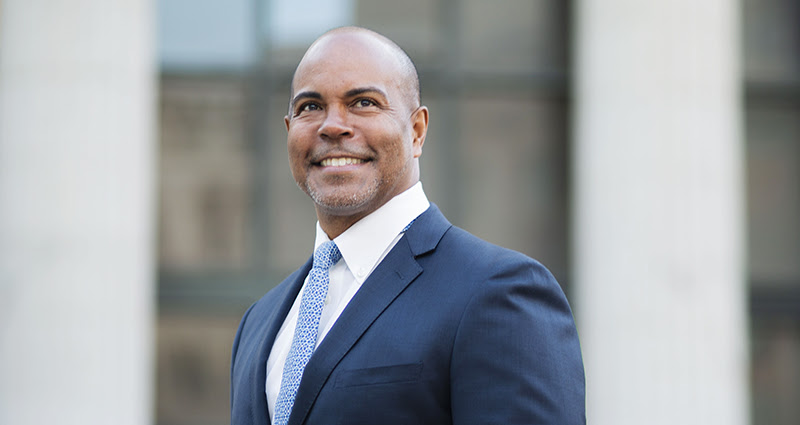 In 1981, Derreck Johnson, a senior at Bishop O’Dowd, was asked by a friend to hang out with her and her friend Kamala, who’d recently returned from Montreal.  Derreck picked them up in his yellow convertible MG, and the three of them tooled around San Francisco for the day.  That day was the beginning of Johnson and Harris’ 40-year friendship.

“We always had a strong influence on each other, because we were both driven to succeed in goals, we set for ourselves. Her, for the District Attorney position in San Francisco.  I remember her saying ‘I’m going to make a difference with these abused girls.’ And me saying ‘I’m going to make a difference in business and employ those that need a second chance.’

“We both accomplished what we set out to do, and that is what we always had in common, yet when she walked out on that stage in her white suit and pearls it was a surreal, unbelievable moment in time for me after seeing her years of struggle and achievement.”

On Nov. 3, 2020, Johnson and Harris were both waiting for election results.  Harris for the outcome of the presidential election, and Johnson, running for Oakland’s at-large City Council seat.

“To show you the kind of heart Kamala has, she called me on November 3 and said she was really proud of me as a first-time candidate, and in my head I said ‘You’re calling me and you’re getting ready to be vice president of the United States!’, then I said to her, “Hold on, you care about my little race?” and Kamala replied, “I care because that’s where it starts, local politics in our community are just as important as what I’m doing ,and no matter the outcome, I’m really proud of you.”

Johnson immediately booked his ticket for Wash., D.C., and called Harris’ sister Maya to plan where they would stay.  Those plans abruptly ended when Johnson received a call from the vice president team stating he would be leaving on Saturday, January 16 on a chartered plane  and that Johnson needed to get two COVID-19 tests 72 hours apart.

Vice President Harris was allowed to have 35 guests, the same amount as Biden had for his family.  It was a controlled environment with lots of restrictions.  After being tested two days in a row, on Saturday they were picked up by plane that had brought other guests from Los Angeles.  “We all knew each other and this was the soul plane for real!  We had an all-female flight crew.  They said it was such an honor that they could serve us being a part of Kamala’s family.

“When we arrived in D.C., a motorcade was outside the plane.  The police escort to our hotel assured no traffic on the highway as we passed, with police escorts in the front, back and side of us.  We got to the hotel, and were tested again, then went to our rooms where memorabilia bags from the inauguration committee welcomed us.  We quarantined until Tuesday.  Besides us and the National Guard, we were the only ones in the hotel, it was very private.  All were tested every day for the next five days.”

During their five-day quarantine they shared Kamala stories, many they knew, but were nice to hear again.  On Tuesday, Johnson went to the vice president’s reception with Harris and spent private time with her.

Johnson said: “We are used to politics as usual, and then you see this person raised by a single mother in the streets of Berkeley, that you hung out with, and then realize she is the vice president of the United states!   That is truly the ultimate American dream.”

On the day of the inauguration, Harris’ friends got up early for a final COVID-19 test then went to the Capitol.

“We walked around the Capitol into the chambers where the inauguration would take place, and when I walked down those stairs so much went through my head.  I thought of her mother and my mother, Martin Luther King, all the people that came before us, and here I am, an

African American man born and raised in the ‘hood standing where Obama and Bush have been. It was an incredible feeling, it gave me the motivation to go for any and everything that is possible in my life, which has led to me to launch the “Black Owned” project with Oakland’s African American Chamber of Commerce on February 1.

“Black Owned “had been in the planning for 11 years, and after my experience, standing with Kamala at the Lincoln Memorial after Katy Perry and John Legend had performed, I knew I could not stall any longer, it was time to launch this project and help my community embrace financial literacy and support Black businesses in Oakland.

“Here I am, standing with my home girl, celebrating her achievement, standing where MLK gave his speech and where other Civil Rights leaders and people in the struggle have stood and I thought of those that have been marginalized and discriminated against, and how Kamala will get things done because she has experienced it.

“How can you lead when you’ve never engaged in the community?  That’s why Kamala is so powerful.  America sees a person who is true, and a person who will serve our interests. They see a person who will get things done because she has experienced the hardship and pain the common man has gone through.”

Johnson has partnered with Cathy Adams, president of the Black chamber to launch “Black Owned.”

“I encourage people to go online and buy a “Black Owned T-shirt as a show of unity in the effort to bring us all together.  All profits go to the African American Chamber of Commerce.  www.homeofchickenandwaffles.com