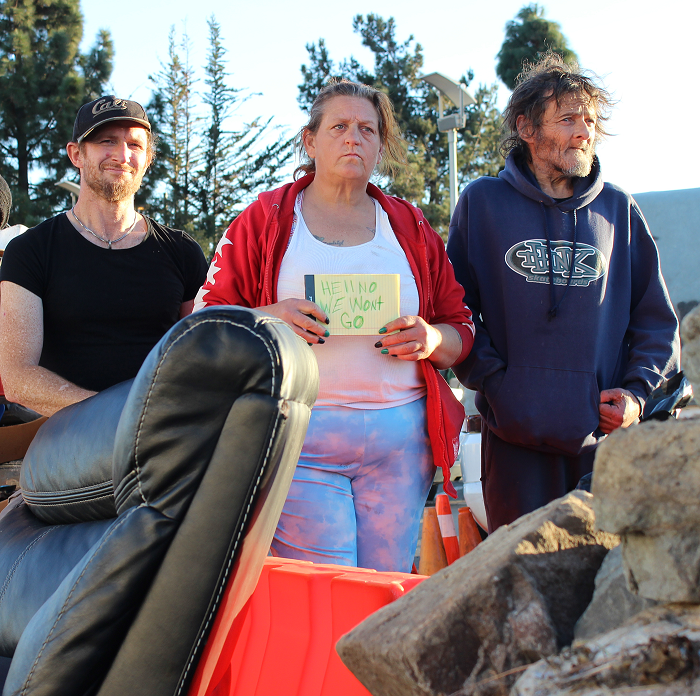 As the City of Oakland has stated intentions to relocate unhoused residents living in Union Point Park in East Oakland, some residents say they will refuse to move unless they can receive a new place to live where they can have independence and services for survival.

“We’re trying to figure out solutions to make it better for any and everybody that comes into situations like this,” said Deanna Riley, who has lived at Union Point Park for two years.

Riley said she became homeless when her husband passed away shortly after listing himself as head of the household of their section 8 housing and she got evicted. She lives in an RV at Union Point, where she and other residents in similar situations have access to bathrooms and water. Currently, about 15 people live there.

But their stay at Union Point Park is tenuous. The park borders the waters of the Brooklyn Basin and is under the jurisdiction of the San Francisco Bay Conservation and Development Commission (BCDC). On Dec. 2, 2019, BCDC sent the City of Oakland a violation report accusing Oakland of failing to “make the area accessible for public purposes such as walking…fishing, and picnicking.” On Oct. 15, 2020, BCDC sent a cease and desist order to the City ordering them to clear residents living at the park by February 12.

On February 5, the City posted notices saying they intended to clear the park on February 9-11. On the eviction days, some residents living at the park decided not to leave. Protestors, some of whom were members of the grassroots anti-gentrification organization The United Front Against Displacement (UFAD), supported them. Residents and activists built a barricade of debris and unwanted materials to slow the eviction effort, held signs, and chanted.

“The City of Oakland was unable to fully implement the closure of the park using the methods and resources that Oakland Public Works, Oakland Human Services, and the Oakland Police Dept. regularly use to complete such a closure due to ongoing demonstrations,” Karen Boyd, Oakland’s citywide communications director, told The Oakland Post in an e-mail about the attempted eviction. She added that the City is now “working with the individuals present to achieve a productive resolution,” and that BCDC had extended their deadline for the City to evict residents until March 12.

The Oakland Post spoke with eight residents in the park who said they would only leave if the City provided them with six-core demands: new land to move to that they can use long term and independently, trash services, water hookups, electricity, room to store their possessions and bathrooms.

“We want a solution that is not just a stop-gap measure,” said Matt Long, who lives in a self-made home in the park. “We want something that will allow us to set up our community and dig in some roots and feel comfortable.”

The City has recently successfully relocated one family who used to live at Union Point into a hotel room. But other residents living at the park said such options have not been made available to them. Instead, the City has offered stays in Oakland’s “Tuff Shed” programs which are operated by non-profits. The City refers to the collections of 10-by-12 foot structures as “community cabins.” Residents feel the “community cabin” land is not theirs to fully use at those programs as residents of the program cannot cook food, have visitors in their unit, have enough space to store their possessions, or come and go when they want or need to. Riley said she used to live in the program but had to leave when she took a night job because the program did not recognize her as living in her unit when she did not sleep inside it at night.

On February 9 to 11, Oakland Homelessness Administrator Daryel Dunston met with Union Point residents and some of their supporters in the UFAD to look at different plots of nearby land that residents could possibly relocate to. On February 11, Adam Garrett-Clark, who runs an LLC called Tiny Logic which specializes in organizing tiny communities, said that Dunston contacted him about collaborating with the City and residents to possibly create a “co-governed encampment.” Garrett-Clark has researched co-governed models for five years, including staying for three days in Opportunity Village, a city-sanctioned co-governed tiny home community in Eugene, Ore.

Garrett-Clark said “the key distinction” between co-governed models and how cities generally operate shelter programs “is removing the paternalistic impulse that usually comes when governments give people housing resources.” He thinks co-governed models place more dignity and trust in the individuals they serve and calls them a “response to the shelter system” where residents can have more power to control the day-to-day operations of the spaces they live in. Residents say they discussed moving to a co-governed encampment model with Dunston, who was supportive and encouraging of the idea.

Although the model has not yet been tried in Oakland, Garret-Clark said Dunston had expressed interest in it repeatedly, stretching back to the summer of 2019, when they discussed collaborating to apply the model to a community of unhoused people who lived near Wood Street in West Oakland.

Part of Garrett-Clark’s desire to get involved comes from the hope of gaining legitimacy and stability to a West Oakland tiny home community he currently operates where his 62-year-old mother lives with five other people. The community has existed for over five years. He said the City is asking for $9,000  in fines due to the tiny homes not being sanctioned on the land where the community sits, even though he rents the land the homes sit on from a landlord.

Garrett-Clark met with a few residents at Union Point after Dunston reached out to him, leaving them optimistic about a possible collaboration with Tiny Logic. On February 11, residents and Dunston identified a small plot of nearby public land, measuring about 12,000 square feet, near the corner of 23rd Avenue and East 11th street, that they were discussing as a possible site to move to. Then on February 26, Oakland’s City Administrator Ed Reiskin, announced in an e-mail that Dunston will leave his job with the City on March 8.

Dunston has not responded to The Oakland Post’s repeated requests for comment on this story. The announcement of his departure from the City has left residents unsure of what will become of their discussions to start a co-governed encampment, as neither Dunston, residents or Garrett-Clark agreed to any formal contracts for a relocation or services related to it.

Despite Dunston’s absence and no formal agreement, communications director Boyd said the City plans to pursue a co-governed model with residents. In an e-mail to The Oakland Post, Boyd claimed the City is working to “identify partners” and that “there are a number of parcels [of public land] that are being considered…to implement a co-governed encampment pilot.” But she also did not respond to direct questions about collaborating with Tiny Logic or utilizing the public land near 23rd avenue and East11th street.

“[Dunston] talked a big game of what the City could do for people, but he said a lot of things he couldn’t follow up on,” said Adam Wurtz, of the UFAD. Wurtz has organized with residents at Union Point since last October to help support them in securing demands in the event of an eviction.

Both he and resident Matt Long claim that Dunston discussed securing $200,000 in City funding for relocating and re-establishing the Union Point community. But he has not been in contact with residents or activists since his announced plans for departure. City Administrator LaTonda Simmons is set to take on Dunston’s role until the City finds a permanent replacement, but activists and residents say she has not been in contact with them either.

Residents say they no longer see clear indications that the City will pursue a co-governed model. Some residents are planning to resist until their demands are met. The UFAD and residents have been meeting weekly since the start of this year to organize around such a resistance. Wurtz says he has been “excited and inspired by how residents have believed in their ability to fight.” He and the residents both claim that if they secure demands from the city in this situation, it will be easier for others to do so in the future.

Although the city has not formally announced an eviction day, BCDC’s order states that it would be possible for them to find the City $6,000 per day if residents remain on site. Due to the threat of fines, and the fact that BCDC has only extended its deadline to the City until March 12, residents think the City will attempt to evict them soon.

In a meeting with BCDC on February 24, Dunston told BCDC officials that residents would voluntarily leave by February 26 and the City would clear remaining debris starting on March 3. But residents still remain onsite and debris, much of which has again been organized in a barricade at the park’s entrance, has not been collected.

Unless the City gives into residents core demands of new land to move to that they can use long term and independently, trash services, water hookups, electricity, room to store their possessions, and bathrooms some residents plan to refuse to leave.

“I’m going to resist,” said Deanna Riley. “I’m not going nowhere. When [the eviction] goes down they’re gonna have a fight.”