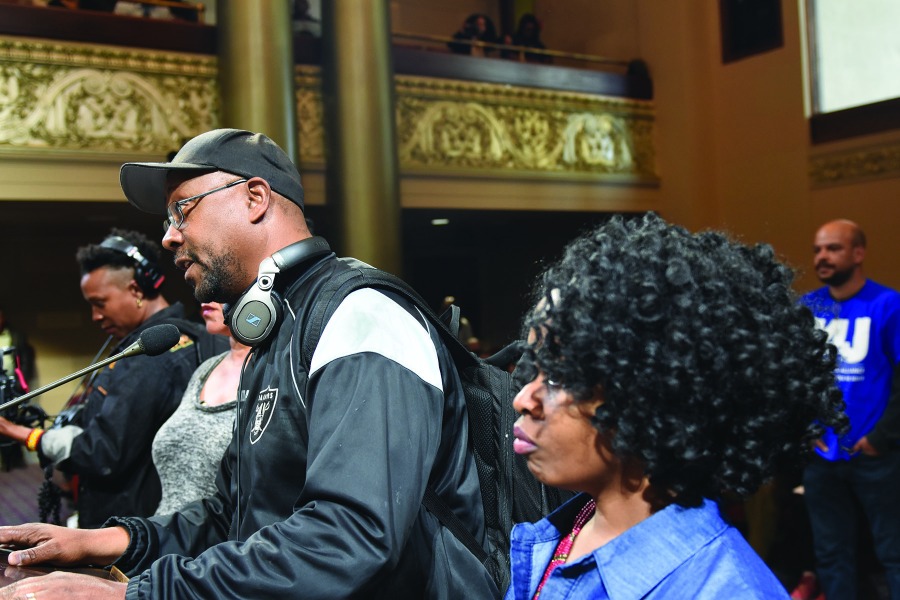 Oakland Mayor Libby Schaaf was the featured speaker at a rally Lake Merritt Sunday of 100-150 mostly white participants. Many of those at the supposedly  “grassroots” protest blamed teachers and the teachers’ union for the failure to reopen schools immediately in the midst of the waning but still virulent pandemic that is claiming lives in Oakland.

“It’s time we get our kids back to school, or as we say in Oakland ‘hella time,’” said Schaaf. “Us adults have to get our stuff out of the way so we can put our children first,” she said in remarks quoted in the San Francisco Chronicle and other media.

The organization sponsoring the rally was called, in social media, “Oakland Parents for Transparency and Safe Reopening.”

Witnessing the Lake Merritt rally and the mayor’s participation in it were Davey D Cook, hip-hop activist and KPFA radio host; and local artist, activist and educator Kev Choice.

“The rally featured the mayor,” though most of those there “were not even from Oakland,” said Davey D Monday afternoon on his radio show, “Hard Knock Radio.”

“It was interesting to see this rally had nobody Black there,” though hundreds and hundreds of Black people were at the lake only a short distance away from where the rally was being held, he said.

Kev Choice, speaking on the radio show, said, “I was taken aback by the demographics of the rally” and particularly upset by two prominent placards he saw at the rally:  “End Oakland Teacher Supremacy” and “Teacher Union Delay Kills Kids.”

“If they want to hold a rally, where are the families and students from the Oakland’s Black and Brown schools?” asked Choice. “Where are the kids from the Deep East?” “Why did they choose to have (the rally) at the lake, which is such a multicultural place of gathering, especially on Sunday.”

He said he was disappointed that the mayor was supporting this crowd, which was not representative of Oakland’s most impacted families and teachers.

“Are (they) considering those schools that are going to need more resources to reopen?”  Choice asked.

Most of the polls and interviews in Oakland and other urban districts indicate that the majority of parents and teachers – unlike families from affluent districts  – are opposed to reopening schools until there are sufficient guarantees of student, teacher and family safety.

Referring to the rally on social media in the  “Mayor’s Weekly Briefing,” Schaaf wrote , “We joined with kids, parents, educators and residents to urge collaboration among our school district, unions and state officials to speed the process and reopen our schools in a safe and equitable manner.”

One of the speakers was Megan Bacigalupi, who said “in-person education” is “essential,” arguing that Oakland is in the midst of “a sea of open or soon-to-be-open school districts,” comparing OUSD to neighboring highly affluent districts that have reopened, such as Piedmont and Orinda.

Bacigalupi is an attorney who works full time for the OUSD Parents organization and the statewide advocacy group Open School CA, according to the San Francisco Chronicle.

Davey D interviewed Mike Hutchison, a new school board member representing District 5, who emphasized that the district has been closed to in-person instruction for almost a year and is facing a serious crisis because it needs a concrete plan to reopen safely.

At the same time, he said there is a “concerted effort” to “rev up a small segment of parents” by some well-funded organizations “that are not friendly to public education” and oppose teacher unions.
CDC guidelines do say that schools can be reopened safely, according to Hutchinson, but also make clear that in order to do so, schools must made safe for students, including social distancing and other safeguards.

“We do not have the space or the staff,” Hutchinson said. “We cannot afford it.”

He and others strongly disagree with those who favor reopening immediately who say a 1% fatality rate of school district staff and families would be an acceptable loss, Hutchinson said.

“Our mayor controls enough money that she could help speed up the reopening of our schools,” he said. “Instead, she chose to (promote) a group of selfish parents and throw the rest of the district under the bus.”