Tallest Cranes Ever for Port of Oakland Arriving from China
Advertisement 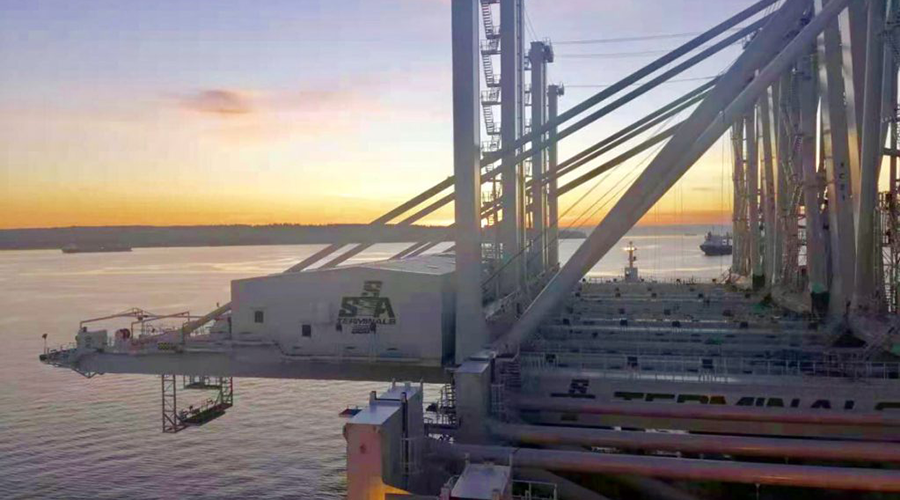 The City of Oakland will get a huge boost to its standing as the Port of Oakland welcomes three large cranes to unload cargo from huge ships that will arrive from China this week.

“These cranes will keep the Port of Oakland competitive so that we can continue to attract the largest vessels calling North America,” said Port of Oakland Executive Director Danny Wan in a statement. “Ultimately, bigger cranes at our waterfront translate into maritime and related jobs for the region.”

Manufactured in China, the cranes are mammoth in size, replacing three older cranes in Oakland’s port.

Fully assembled, the cranes are too large to fit under the Golden Gate and Bay Bridges. The crew of the ship carrying the cranes “lowered the booms” Wednesday while the vessel was anchored in Drakes Bay near Point Reyes.

The ‘booms,’ long poles that lift the cargo from the ships to the port, are 100 feet taller than the 20-story Tribune Tower building at 13th and Franklin streets in downtown Oakland.

With the crane booms lowered the ship carrying the cranes, which were manufactured by ZPMC of Shanghai, will easily clear the bridges.

After entering the Bay, the ship will go to anchor, lower the booms, and then remain at anchor for several days while final preparations are made for the vessel to come into the Port of Oakland and dock.

This is a historic moment for the Port of Oakland and the region, fulfilling a vision begun years ago by the Oakland Port Authority Board of Commissioners. At the time, the late Thomas L. Berkley, the founder of the Oakland Post and El Mundo and the port’s first Black commissioner, negotiated the deal for the cranes. The cranes are valued at $30 million.

Stevedoring Services of America (SSA) is investing in the giant cranes, which can reach up to 225 feet across the deck of ships and lift as high as 174 feet above the dock.

“Taller cranes are needed for efficiently handling cargo that arrives on ultra-large container ships,” said SSA Containers President Edward DeNike. “This new infrastructure is a commitment to the port that we will continue our maritime business at Oakland well into the future.”

According to Bay City News, each 1,000 containers represents eight jobs. With its business partners, the Port of Oakland supports more than 84,000 jobs.

The Mercury News, Bay City News and Rail News contributed to this report.