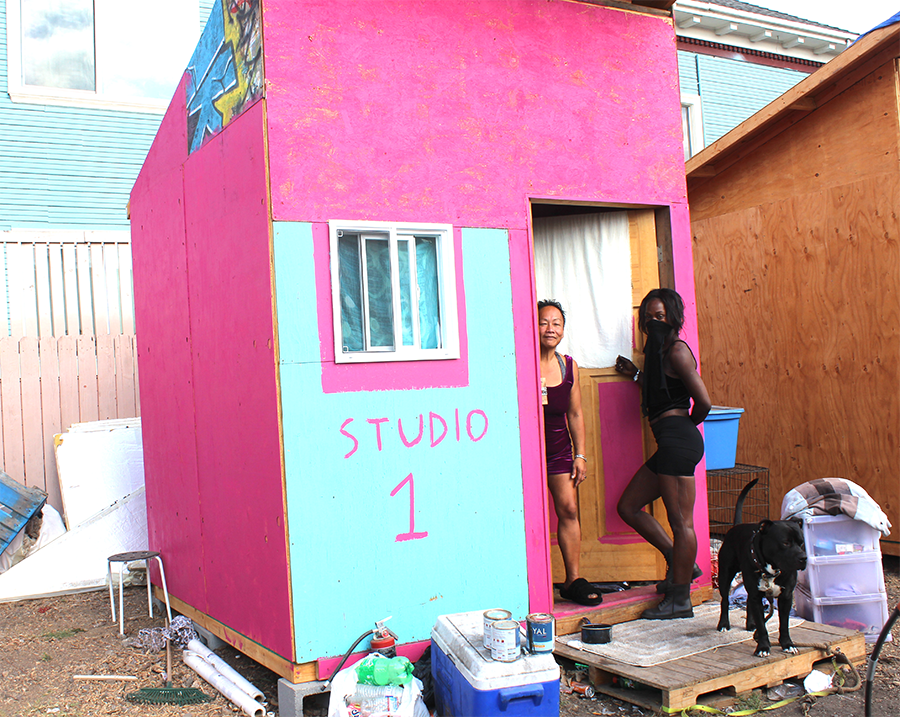 Residents of a homeless community 37MLK, Rome (center) and Chrise (right), stand outside of Rome's tiny home which community volunteers built. The community exists in a high sensitivity area, so could be under threat due to the passage of the new Encampment Management Policy. Photo by Zack Haber.

Late on Oct. 20, Oakland City Council unanimously passed an Encampment Management Policy that codifies where people experiencing homelessness are and are not allowed to live, but firm plans for what shelter options people will be offered if cleared from a prohibited area have not been set.

The policy defines any space within 50 feet of a residence, business, protected waterway, public park, or sports court, and within 100 feet of a school as a “high sensitivity area” and further states that “encampments located within a high sensitivity area that are not approved by City Council will be subject to closure intervention.”

“This means they’re going to evict encampments across the entire city,” said Talya Husbands-Hankin of the Oakland homeless rights advocacy group Love and Justice in The Streets. Calling the policy “cruel and racist,” Husbands-Hankin echoed concerns of public speakers at the Oct. 20 City Council meeting, where over 175 speakers spoke, the vast majority of whom spoke critically of the EMP.

Well over 100 other people took their concerns to the streets during the meeting, as protestors, many of whom were associated with The United Front Against Displacement, House The Bay, and TANC Bay Area, hosted anti-EMP noise demonstrations outside of City Hall and Councilmembers Noel Gallo and Dan Kalb homes.

crowd of about dozen and counting are outside council member Dan Kalb’s home. they’re gearing up for a noise demo to protest Oakland’s proposed Encampment Management Policy. pic.twitter.com/zNCDHkijsI

Those critical of the EMP said that the policy leaves homeless people with no safe place to go as high sensitive areas encompass most of the city. But Daryel Dunston, Oakland’s Homelessness Administrator who presented the policy to City Council, said that the policy “leads with services, compassion and empathy,” and that services and offers of alternative shelter would be given before a clearance. He repeatedly claimed that the policy does not seek to criminalize homelessness and that no one would be arrested just for sleeping outside.

At the meeting, Dunston referred to a recent operation at Pine and 11th streets in West Oakland as an example of the City’s process of providing alternative shelter before clearing an encampment. But Needa Bee, of The Village, a homeless advocacy group, said an elderly homeless Black resident got displaced during this operation. (Since The Post was unable to communicate with him, we are using a pseudonym for him here.)

“They threw away [Michael Simpson’s] belongings and then offered him a few nights in The Travel Inn,” said Bee.

According to a contract between Simpson and Operation Dignity, a non-profit that the City of Oakland works with that helps to connect homeless people with shelter services, Simpson was offered four days of hotel shelter but then would have to pay to remain in the room. It shows he was also offered space in the City’s Community Cabins program, but Bee said he refused due to negative experiences living in them in the past.

Sara Bedford, of the City of Oakland’s Human Services, disputed Bee’s claim in an e-mail sent on Oct. 26.

“We cannot share any specific information but can confirm the individual is no longer unsheltered,” she wrote.

City programs to shelter homeless people in Oakland are limited. Homeless shelters are usually full and some do not offer extended stays. Oakland Community Housing Services Manager Lara Tannenbaum said in an e-mail that the city has 218 community cabin beds, 108 safe RV spaces, and 128 trailer beds. Oakland’s point-in-time count claims there are 4,000 homeless people in Oakland and the Homeless Advocacy Working Group’s count claims around 10,000 people.

In a newsletter sent on Oct. 23 where he referred to the City Administration who would enforce the EMP, Councilmember Kalb wrote, “They have assured us that no encampment would be fully closed, or individuals asked to move without multiple offers of services and shelter, due process and proper noticing.”

There is not yet an agreed-upon definition between the City Administration and the Council defining what shelter would be offered. In her own newsletter, also sent on Oct. 23, City Council President Rebecca Kaplan wrote, “there is a need to ensure a shared understanding of what is required in terms of the provision of adequate shelter.” Then she wrote that the issue would be addressed in a meeting on Dec. 1.

“What really disturbs me and makes me upset is that Oakland, unlike San Francisco, has the amazing resource of 50 plus acres of vacant public land,” said Margaretta Lin, executive director of Just Cities, a non-profit that works towards racial justice, housing for all, and police transformation in Oakland.

She was critical of the EMP as there currently are no long-term spaces that have been made available for most of Oakland’s homeless people to live in if they are cleared from their current locations.

Lin wants to use the vacant land for mobile homes, trailers and tiny homes that would provide shelter for three to five years, claiming that if this were a natural disaster, like an earthquake that affected middle- to high-income residents, public land would already be used for such purposes.

She also pointed to recent funds from taxes like Measures W and Q, that could be used to arrange and construct such shelters.

“Her response was this is a great plan and we’re doing it,” said Lin. “But I don’t think they’re really doing it.”

Neither Schaaf or her media team have responded to questions about whether or how she is currently implementing the Just Cities plan.

In the meantime, some Oakland residents are building tiny homes of their own. 37MLK, a community of long-term homeless residents in the Bay Area who live on private land that has long been left vacant, have started moving into tiny homes that are built and funded by volunteer community members.

While several units are already built and lived in, volunteers are ramping up efforts and plan to have seven units built by Nov. 7. The 8-by-8 foot and 8-by-10 foot units have locking doors and solar lights. By the winter, they hope to install insulation. They are funding the project through Instagram.

“I think that the city should let us have unused property or land that’s just going to waste,” said Rome, a 53-year-old Bay Area native who has been homeless for nine years, and currently lives in a tiny home at 37MLK. The community sits in a high sensitivity area.

Rome talked of how having a roof over her head has made it possible for her to reduce the risk of infection, which may allow her to get a long-needed hip replacement surgery if she can be assured of stability. A bad hip leaves her in constant pain that fluctuates in intensity and limits her ability to move.

Stefani Echeverría-Fenn, who helped found the 37MLK community and has lived in Oakland since 2010, thinks what is happening at 37MLK could happen on a much larger and more effective scale if the city made use of public lands and funding.

“I think all of us are a set of broke millennials with no real money ourselves and no construction skills until we were trained,” she said. “Imagine what we could do with real resources on public land.”