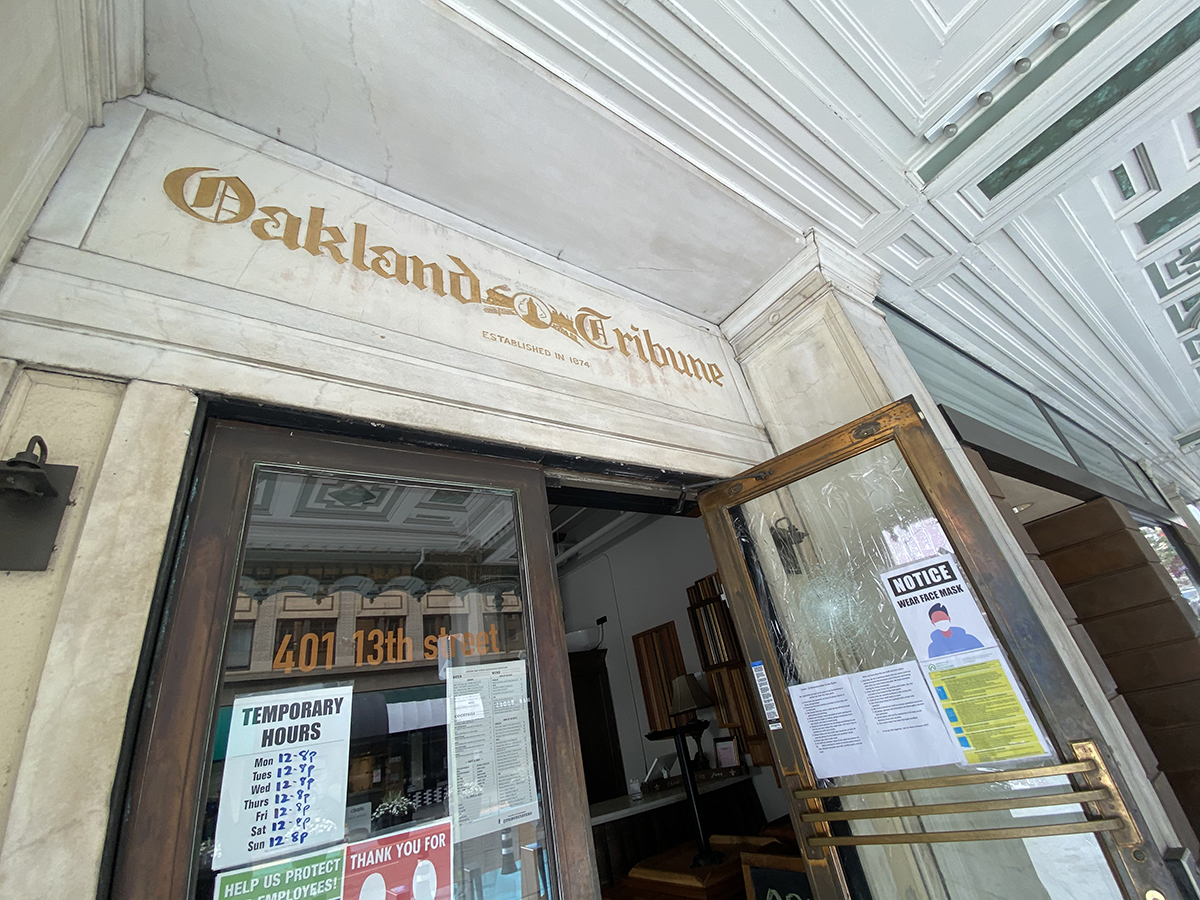 Wearing a t-shirt, jeans, and a baseball cap that says Oakland California, Chris Pastena’s appearance looks like he could be part of any protest like the one that passed the restaurant he operates. When he tried to stop a white woman from taking a bat to the restaurant’s door during a protest on Saturday night, a crowd of people attacked him. Another group of protesters stopped the attack. They had not realized he was a co-owner of the restaurant, Tribune Tavern, or that he owned it with his wife, who is Black.

“Who brings a bat to a protest?” said Pastena.

In a Facebook post about the incident, Pastena wrote, “Dear white woman with a bat, you do not know the harm you do. You march in a righteous protest for BLM yet you choose to attack a business that is owned by a Black woman and employees almost all POC. You are in Oakland in a diverse community, any destruction that you do hurts POC. Do you care? Or is it your privilege not to care?”

The glass window door of Tribune Tavern shows broken glass after a woman with a bat hit the window during a protest on Saturday, July 25. Photo by Michelle Snider.

Pastena said the post was meant to start a difficult conversation about protests and the tactics used in recent protests, not only to destroy large corporate businesses and institutional buildings like Alameda County Superior Courthouse but have also taken a toll on small businesses as well.

Pastena’s concern is not just for the community at large but for his employees who are mostly POC and depend on his restaurant to financially survive. The business has already taken a hit due to COVID-19, and he does not want to have to shut down and let go of any of the staff members he and his wife employ.

“I don’t want to make it about me, or the Tavern or the building…It’s not about me. It’s about people who are doing things that take away from the issues at hand,” Pastena said. “It’s my job to provide a safe environment for my employees.”

The nighttime protest on July 25 was organized in response to Portland, OR ongoing BLM protests which have faced unidentifiable federal police agents arresting people and throwing them into unmarked vehicles. In response, groups like Wall of Moms and Dad’s with Blowers popped up to help the protesters.

Wall of Moms Bay Area organized the Oakland response protest on Facebook with Refuse Fascism Bay Area and Vigil for Democracy in order to march against federal agents coming to Oakland.  President Donald Trump said on July 20 he would send Federal agents to Oakland. While the protest drew in a large crowd, no federal agents appeared.

Pastena said most of the protesters were peaceful on Saturday night and stayed on message. It was not until the tail-end of the protest that he noticed a change in chants and direction.

This was not the first time he had a violent during a protest. A man kicked his foot throw a window that was already broken on May 29. Pastena said when he asked the man to stop the man swung and hit him on the chin and yelled, “We’re here to burn this mother-fucker down!”

Pastena said that has nothing to do with George Floyd or the message of Black Lives Matter. Pastena said for several nights after the late May protest, young white kids would walk up to him and ask him where they were. He said it showed him that many of the people showing up downtown at night were not from Oakland. He said one of them came up to him and asked him, “Where are the riots tonight?”

Pastena said he cares about the current movement and does not wish for protests to stop. After the May 29 protest that left much of downtown with broken windows and destroyed property, he and his friends came together and cleaned up the streets. He helped people set up areas to leave paint so art can be put on boarded windows.

He and his wife own several restaurants in Oakland, and they believe deeply in taking care of the community around them. They are working with World Central Kitchen to feed thousands of homeless people. Pastena said he even drained his bank account during the pandemic to cut checks for people he works with who could not get unemployment. “That’s all we care about, my wife and myself, she’s my partner in this, she’s my partner in life and partner in businesses. Without her, none of this happens.”

When it came to last Saturday’s protest he said, “There was this really nice protest happening. It felt like there was a lot of energy. As they walked around 13th, it seemed very positive…that’s what this is all about, positive change.”

There were about a thousand people who passed by in the protest he said, but as the crowd passed the energy changed. A smaller group at the end of the crowd wearing all black with white faces started throwing trash cans. That’s when he noticed a woman swinging a bat at the Tavern door. He yelled, “stop this is a small business,” she continued to swing the bat. He approached her to try and stop her again, unsure if she was trying to swing again at him or the door. He was in between her and the door mid-swing and pushed her. That’s when a crowd started to attack him.

“At that moment…all I was thinking about is, if I can’t open tomorrow, if I can’t provide a place for work tomorrow what happens to my staff? They need jobs right now. They need income. Their kids need to eat,” said Pastena. 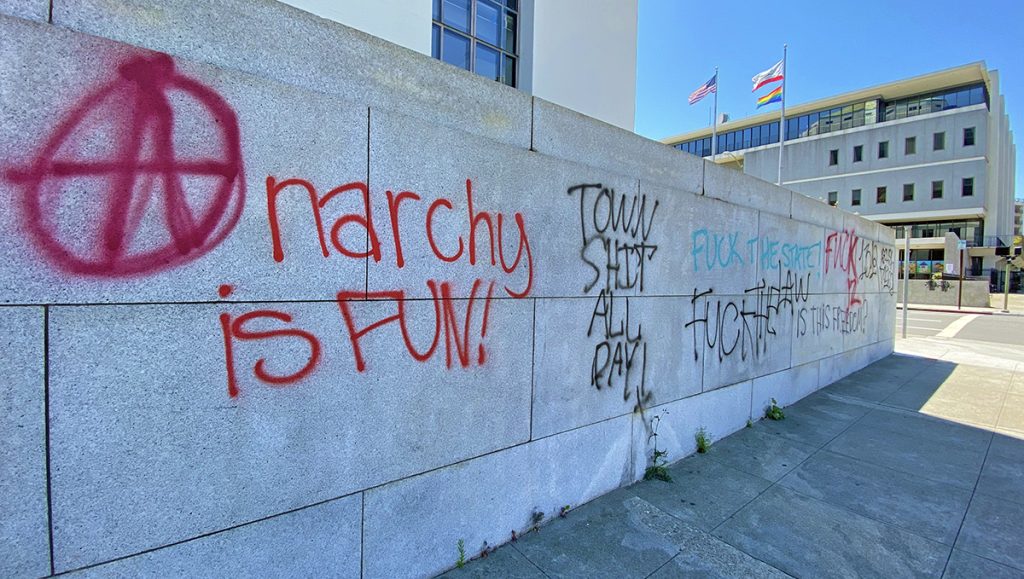 “Anarchy is fun” is spray-painted on the side of the Alameda Courthouse. 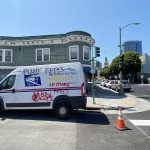 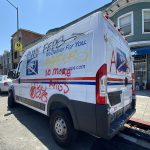