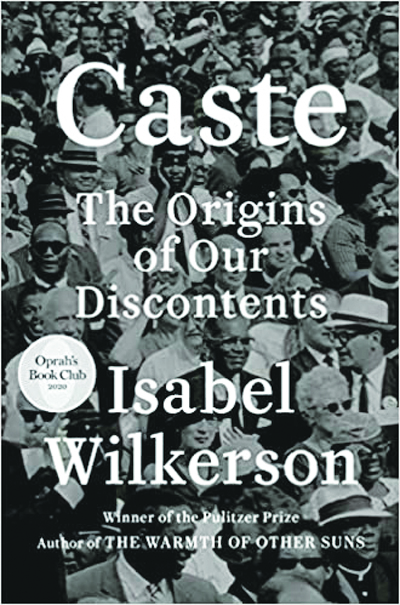 This week, I am recommending three books to add to your education on African American history.

A hidden phenomenon has weaved its way through the surface of American history and defined a so-called hierarchy of human rankings: a caste system. Caste is defined as a “division of society based on differences of wealth, inherited rank or privilege, profession, occupation, or race.”

In the eye-opening book “Caste: The Origins of our Discontents”, author Isabel Wilkerson pens an artful portrait of this phenomenon in America by telling the stories of the lives of real people.

Each piece is a thoroughly researched, riveting narrative describing—beyond race, class, or other factors—a caste system powerful enough to influence lives and behaviors.

Wilkerson explains why America can be described as having a caste system, said NPR host Terry Gross, and how, “if we use that expression, it deepens our understanding of what Black people have been up against in America. She compares America with the caste system in India and writes about how the Nazi leadership borrowed from American racist laws and the American eugenics movement.”

Throughout this must-read, Wilkerson links the caste systems America, India, and Nazi Germany.

In 2011, Wilkerson won a National Book Critics Circle Award for her book about the Great Migration, “The Warmth of Other Suns” and a Pulitzer Prize in 1994 when she worked as a reporter at the New York Times.

‘Black People Invented Everything’
The ancient people of the Andes had a special formula for beer from maize. The ancient Egyptians may have been the first to record their use of baking soda as a natural deodorant, toothpaste, and soap. The oldest gastronomic traditions on the planet date back to the oldest communities, suggesting that Africans prepared the best food on Earth. Jack Daniels attained the perfect recipe for whiskey from a slave; Colonel Sanders turned to a Black woman for the success of his chicken.

Reading about these inventions will catapult one back to the dawn of humanity. Blacks since then have always drawn on a timeless well of inner genius to innovate and engineer the design of the world we live in today. Author Sujan Kumar Dass navigates readers through the history in Black People Invented Everything: The Deep History of Indigenous Creativity.”

On May 2, 1963, more than 1,000 students – some as young as 7 and 8 years old — skipped classes and gathered at Sixth Street Baptist Church. Their goal was to march to downtown Birmingham, Ala. Hundreds were arrested and carried off to jail in paddy wagons and school buses. This civil rights demonstration was called the Children’s Crusade. Despite the harsh treatment, the children continued protesting. One of the most memorable scenes was when they were sprayed with water from high-power hoses used by the fire department.

Audrey Faye Hendricks was nine years old at that time. Growing up witnessing her parents’ involvement in the movement, she was among the children jailed that day and held for a week.
In the illustrated story “The Youngest Marcher: The Story of Audrey Faye Hendricks, a Young Civil Rights Activist,” author Cynthia Levinson escorts the reader through Audrey’s role in the march and her experiences while being jailed that led her to become a young crusader. Both children and adults will enjoy reading about this pivotal time in Black history.