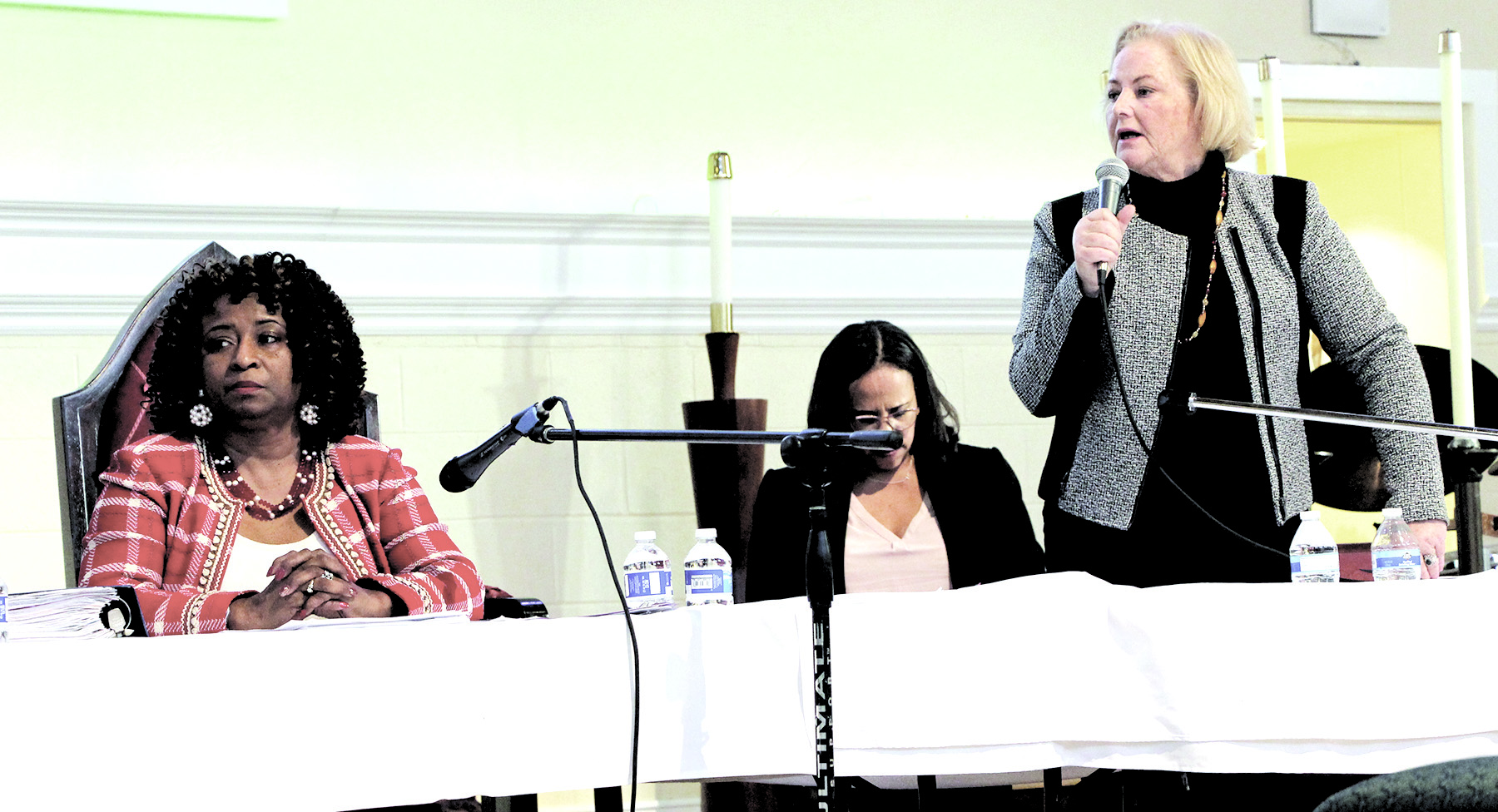 Incumbent District Attorney Nancy O’Malley (right) answers a question from Oakland Community Organizations (OCO) along with her opponent, Pamela Price (left), at a townhall forum at St. Columba Catholic Church in Oakland on May 23. Photo by Sarah Carpenter.

The June 5 election for Alameda County district attorney is heating up in the final week before ballots are due.

At a forum for the candidates last week, current DA Nancy O’Malley accused Pamela Price of running a dishonest campaign, while Price emphasized that as district attorney she would bring justice to communities that are desperate for police accountability.

Hundreds of Oaklanders attended, filling the seats provided on the ground floor and the small balcony above the entrance. The candidates answered questions from local organizations, then from the audience.

The first audience question asked each candidate to say a quality or characteristic that they appreciate about their opponent. O’Malley said she respected Price’s work as a civil rights lawyer.

Price responded, “I don’t know Miss O’Malley personally, so it’s hard for me to say that there’s a quality or a characteristic about her as a person that I appreciate. What I have heard is that she is a nice person.”

O’Malley focused on her track record as a DA, emphasizing her experience in running a large organization. She has become well known for fighting against the sex trafficking of minors.

O’Malley has been the district attorney since her appointment in 2009. She recently dismissed over 6,000 cannabis convictions, clearing the records of those targeted by the “War on Drugs.”

Price had criticized O’Malley for allotting the public defender a significantly smaller budget than the district attorney’s office. O’Malley explained that the DA has 250 more employees than the public defender, and that she had raised $17 million of her office’s budget herself.

Price grew up in the foster care and juvenile justice systems. She went on to graduate from Yale University and U.C. Berkeley School of Law. Her campaign is focused on protecting immigrant and minority populations from abuses within the criminal justice system.

“This community is desperate for police accountability,” Price said. She has criticized O’Malley for not prosecuting any officer involved in the sexual exploitation of Jasmine Abuslin, an underage sex worker better known as “Celeste Guap,” for obstruction of justice.

Price’s message resonated with Demetrius McCray, 21, who reached out to volunteer in her campaign. “It’s really easy to get discouraged by what’s happening in the world, and it’s a rare opportunity that you see someone like her running,” he said. “What she values, what she stands for, it’s all extremely good and genuine.”

In her closing statement, O’Malley quoted New York Mayor Michael Bloomberg’s commencement speech in which he said the country is plagued with an epidemic of dishonesty. “And I’m sorry to stand here to tell you that’s what’s happening in this campaign, not by me but by my opponent,” O’Malley said.

She is endorsed by a long list of politicians, including Governor Jerry Brown, Mayor Libby Schaaf, Senator Dianne Feinstein and Senator Kamala Harris.