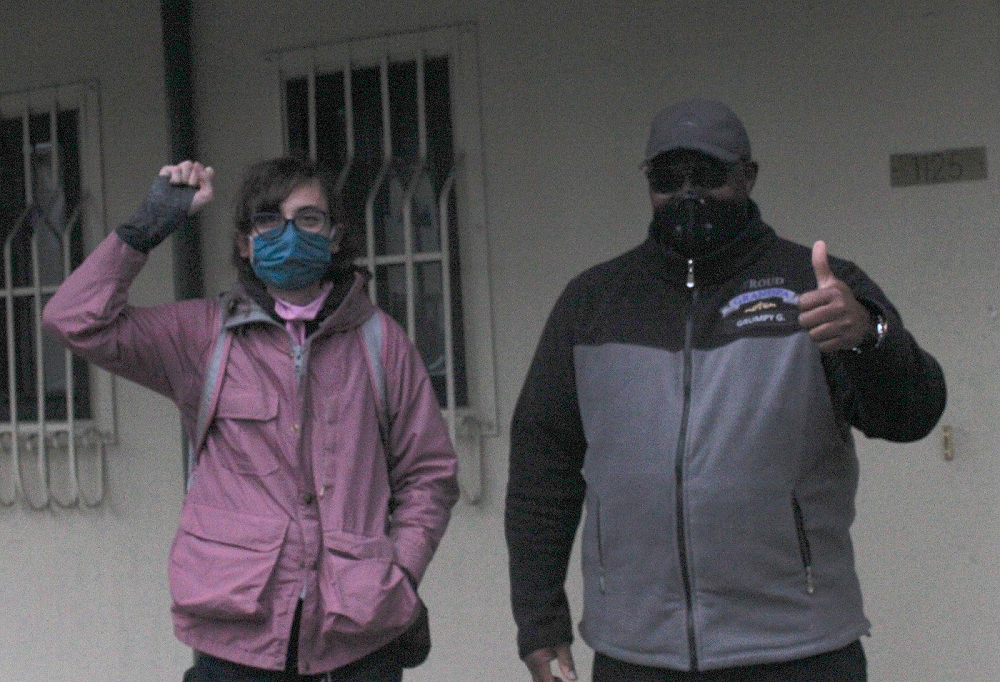 Cassidy Taylor (left) of the housing justice group The United Front Against Displacement, and Eddie Simmon (right) a Peralta Village resident of 20 years, pose outside of a Peralta Village apartment on January 24. Photo by Zack Haber.

Residents of Peralta Village and organizers and members of the United Front Against Displacement are planning a protest at the Oakland Housing Authority (OHA) headquarters on February 13 because of OHA’s slow responses to requests for repairs, lagging upkeep and threats of eviction despite the current moratorium caused by the pandemic.

The protesters will deliver the petition to OHA offices. The time of day and place of the protest will be announced at a later date.

The direct action on February 13 is the result of organizing that began last fall, when about a dozen Peralta Village residents started meeting with each other and Bay Area-based housing rights activists seeking improved maintenance and better treatment from OHA.

About 11%, or 85, of Peralta Village residents of the West Oakland public housing project’s population have supported the efforts by signing a petition residents and activists wrote accusing OHA of “unresponsive or slow…follow-through on repairs and regular upkeep,” “threats of eviction” despite eviction moratoriums that are currently in place, “not clearing garbage…on a consistent schedule” or providing recycling bins, and unfair ticketing from OHA Police. The petition asks OHA to improve maintenance and reduce rent until problems are fixed.
“We gotta get together and make it a group effort,” said Eddie Simmon, who has lived in Peralta Village for over 20 years. “One person [addressing OHA] is like a mosquito bite; they flick it away. But if you get a whole hornet’s nest, then you got something to contend with.”

Simmon is one of four Peralta Village residents, all of whom are Black in their late 40s to mid-60s and who helped write the petition, that The Oakland Post interviewed. Fearing retaliation, two of these residents requested anonymity in this article.

Peralta Village consists of 390 units in a mix of one- two- and three-bedroom apartments as well as town homes that serve more than 700 residents. Originally named Cypress Village, it was created just after World War II as segregated all-Black housing in West Oakland at 935 Union St. To this day, its population is almost entirely Black and many still refer to it as Cypress Village.

The Oakland Post also interviewed three activists, all of whom are in their 20s and are part of the grassroots housing justice group the United Front Against Displacement (UFAD). The group has been doing weekly door-knocking in Peralta Village since last summer to connect and organize residents. In recent months, residents have joined in the door-knocking.

Residents meet with each other and UFAD members weekly, sometimes in person and sometimes on Zoom. The meetings are called Cypress Tenants Meetings and have no affiliation with OHA. Residents can learn more about the meetings by contacting the UFAD at wewontgo@riseup.net or 510-815-9978.

“It’s been really encouraging seeing folks get enthusiastic about doing tenant organizing in the projects,” said Cassidy Taylor, a low-income essential worker who lives close to Peralta Village. She moved to Oakland from Boston about a year ago to work with UFAD and sees tenant organizing as important to improving the conditions of all working-class people.

Taylor is among the Peralta Village residents and other UFAD members who will participate in the February 13 protest and deliver the petition to OHA offices.

Their protest will address the ill treatment that many Peralta Village residents say they are experiencing. One resident claimed that it recently took OHA six weeks after she notified them to fix her window that wouldn’t close.

Another resident, JaCynthia Givens, said she’s been “having headaches and weakness” due to breathing black mold in her apartment. Gena Rainey, 38, who spends time in Peralta Village as a caretaker for her mother, said she has contacted OHA more than 10 times in the last year requesting that they fix broken wiring that causes the overhead lighting to fail in her mother’s apartment, but no OHA workers have helped.

“I understand they consider this the ghetto or the ’hood but we deserve to be treated better,” said Rainey.

According to OHA spokesperson Greer McVay, OHA has a property management team that addresses maintenance issues when tenants put in work orders. She said that “because of COVID-19, we’re doing things a bit differently and prioritizing emergencies.”

While OHA used to send workers out in shared vehicles, now only one worker can be in a vehicle at a time, which slows down the process of fulfilling work orders. McVay claims that generally non-emergency work orders get fulfilled within two days, though she acknowledges “there are times where work orders have slipped through the cracks.”

The residents The Oakland Post interviewed all claimed that delays of weeks or months in securing repairs usually occur when they put in work orders. Simmon said he started doing his repairs himself because OHA maintenance workers do not give specific times when they plan to do the repairs.

“They just come whenever they want to come,” said Simmon. “You might not even be available.”

When workers come and tenants are not at home, the workers leave. Simmon wants the workers to arrange times with tenants to fulfill work requests so they do not waste trips and repairs can be fulfilled.

Tenants said that when OHA feels they have broken housing rules, OHA threatens them with eviction. Rainey said these notices scare people and that her mother fell ill soon after OHA sent a letter threatening to evict her due to Rainey parking next to her home and within Peralta Village’s gates without a pass, a technical violation of OHA’s policies that is commonly practiced due to safety concerns with parking on the street.

Another resident, who is in her 60s, said she got a threatening notice after she fought back against a neighbor in her 30s who attacked her. The resident said she experienced repeated harassment from this neighbor, reported it to OHA over two years, but that OHA never worked to remedy the situation. The notice, which The Oakland Post obtained, threatened to evict her if she ever engaged in an altercation with the neighbor again. After obtaining what she calls threats from OHA instead of help, she is scared to meet with them.

According to McVay, OHA is not currently evicting residents.

“We are always going to look for ways to help people if they are in non-compliance [with OHA rules],” she said. “And we have not evicted anyone during COVID-19.”

When a resident is accused of violating an OHA rule, they are sent forms including what McVay describes as “standard legal language” that could “seem harsh” to residents, but she said that OHA also follows up and tries to keep residents housed. Residents The Oakland Post interviewed said they felt threatened rather than helped by OHA.

All residents interviewed said that overflowing trash in the dumpster area is unpleasant to deal with and attracts rodents. A few said the conditions made them scared to throw their trash away. During a visit to several dumpster areas around the apartment complex on January 24, rats could be seen scurrying around waste matter that included unbagged food scraps piled on the ground. Electronics and cardboard boxes could be seen outside of but near the dumpster area. No recycling receptacles were present. While in the past, Simmon said clean-ups from workers happened weekly, now they’re “almost non-existent.”

McVay said much of the trash problem in the area is related to people from outside the neighborhood dumping in OHA receptacles. Peralta Village tenants confirm illegal dumping is common but think that OHA is not addressing the problem. One resident suggested installing cameras to document and discourage dumpers. Residents say people from outside the neighborhood also throw trash around searching for recyclable cans and bottles, and that the presence of recycling receptacles would alleviate this problem.

McVay supports recycling at Peralta Village and said “I believe that all of our locations have recycling bins and if they don’t, then they should or will soon.” But all residents interviewed said no recycling receptacles currently exist in their dumpster areas.

Residents like Givens see a disconnect between how OHA says treats residents and what she and her neighbors experience. She described the way OHA treats her as inhumane.

In a recent meeting with UFAD members, she expressed excitement about protesting OHA offices February 13.

“We don’t have to be afraid,” she said. “We’re just fighting for our rights.”